Something pretty epic happened earlier this month.  Little Bee Books invited my daughter Lucia and I to join for a Mother-Daughter interview with the Mother-Daughter writing pair, Sheryl and Carrie Berk!  It’s no secret that Lucia has an enormous love for books. She’s been reading since she was 5 and has accumulated a library in her room with well over 200 books, including one of her favorite series, The Cupcake Club (also written by Sheryl and Carrie Berk). When I told her that we would get the chance to interview two of her favorite authors about their new book, Ask Emma, she was ecstatic!

Emma Woods knows just how to fix all her peers’ problems-or so she thinks-in this first book in the brand-new middle grade series Ask Emma, from the bestselling creators behind the Cupcake Club series!

When 13-year-old Emma Woods gets that tingling feeling in her fingertips, she knows she’s on to a great idea–and starting an advice blog for her classmates at Austen Middle may be one of her most brilliant ones yet! Who better to give advice on friendship, style, school, and even crushes than someone who’s going through it too?

But when Ask Emma goes live, she quickly realizes not everyone sees it that way. Suddenly, Emma is bombarded with peers asking her to help them postpone quizzes, get out of detention, and cut gym class short. This wasn’t exactly what she had in mind. . . .What’s worse, someone is posting hurtful comments, telling her to mind her own business. Despite her good intentions, Emma’s blog seems to only be getting her-and her friends–deeper and deeper into trouble.

Will Ask Emma come to an end before it’s really begun? Or can Emma find her voice, write what’s in her heart, and truly stand up for what she believes in? 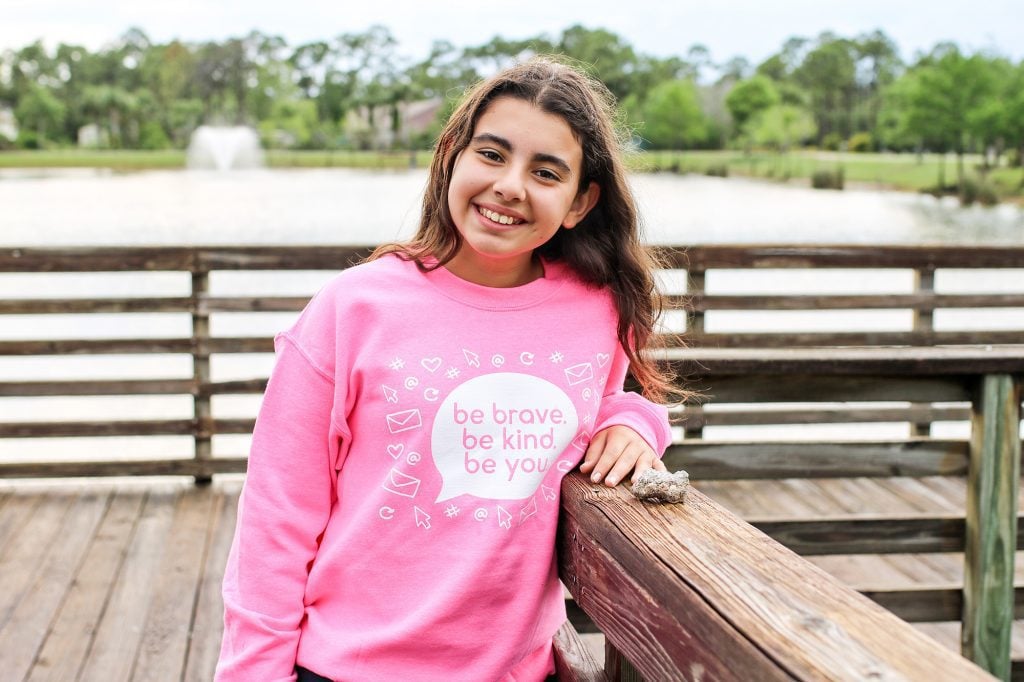 It wasn’t long before Lucia finished Ask Emma. In fact, I believe it took her only one day to finish the entire book.  She immediately shared with me how much she could relate to Emma, a middle-schooler who loves to give advice. It’s not often that I’m able to read the same books as my girls, so it was nice to be able to read the book and discuss it, together. The book focuses on a subject that is so relevant and sadly, incredibly present in this day and age… cyberbullying.

Both Lucia and I have been the subject of cyberbullying. It’s something we’ve discussed at great lengths and I love that Sheryl and Carrie tackled this subject in a light-hearted way that my girls could relate to.

“Being able to teach kids at this age how to deal with cyberbullying, what to do if they feel like they’re being bullied, and get them to a point where they can also understand what it feels like– we hope we’re reaching kids who might be tempted to cyberbully.  I don’t think a lot of kids often realize when they post negative comments that those words are very powerful. We always say words can hurt, but words can also heal.” -Sheryl Berk 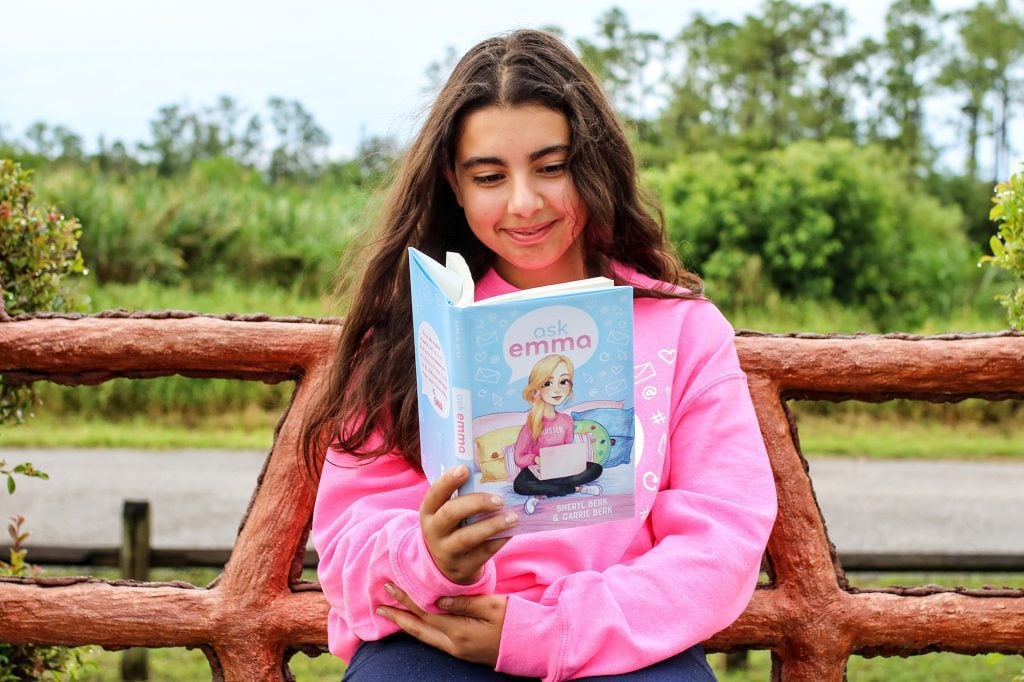 I’ve watched Lucia struggle with acceptance already.  More than anything, as the Mom of three girls, I want them to be themselves and embrace their originality (as goofy as they are sometimes).  Wouldn’t the world be boring if we were all exactly the same?  Unfortunately, there is a pressure to look a certain way and dress a certain way, especially in Middle School.  I love that Ask Emma was able to give Lucia a fresh outlook and Carrie, someone that she admires, could share that she also had similar experiences growing up.  She is someone that I’m proud to have my daughters look up to.

“A message we really wanted to put out there is that kids should own who they are and never be ashamed of who they are.  It’s what makes you special and different and wonderful.” – Sheryl Berk 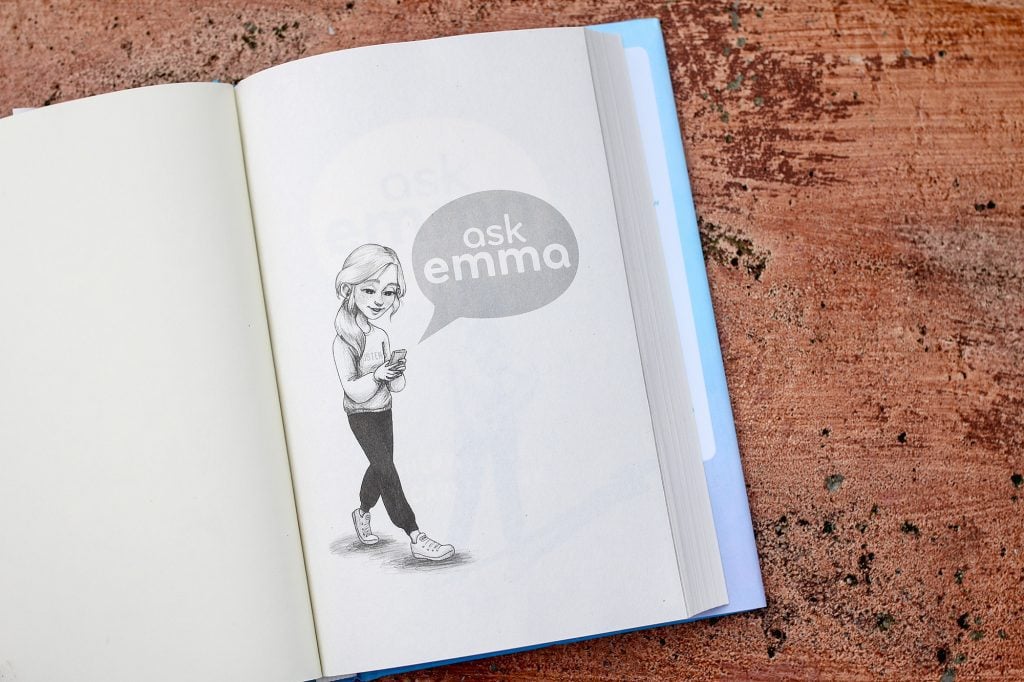 Now that Lucia and I have both finished the book, we’ve passed it onto my 8 year old, Iyla.  It hurts my heart to know that she may face cyberbullying in the near future.  I want her to be prepared. I want her to feel comfortable enough to come to me or her older sister if someone makes her feel any less than they should. I want her to know that it’s not ok to be mean to someone, even if you are sitting behind a screen and no one can see you.  We want to believe that our kids will make the right decisions but we all know that it could be any of us who can inflict pain on someone else, without realizing it.

“I think the younger we can talk to kids about cyberbullying, the better chances they have of not being victims themselves and not doing it to other kids.” Sheryl Berk

“My experience with cyberbullying really reached its peak when I was in middle school, so I feel like my story with Emma experiencing cyberbullying would resonate most with middle school students.  Although, you can never be too young or too old to read this story.  I feel like it’s a good source of education for any age.” – Carrie Berk

I think what I love most about Sheryl and Carrie Berk is their incredible respect for one another.  It’s every Mother’s dream for their little girl to follow their hearts and succeed in a field that makes them happy.  Listening to them during our interview really inspired me to encourage my girls even more. At only fifteen years old, Carrie Berk is already a bestselling children’s book author, playwright, dancer, singer, actor, model and lifestyle blogger. Carrie has already accomplished more than most people accomplish throughout their entire life.  She’s not only successful, but so down-to-earth and humble which is a tribute to her Mother for raising her and cheering her on while she chases her dreams.

“I do think what makes our books so genuine is because they’re coming from a real kid.  I couldn’t write any of Emma’s blogs with the same authenticity that Carrie can because she is coming from a place of experiencing it and feeling it. Those feelings, they’re raw and they’re real, and I think that’s what really speaks to kids.  They read it and they see themselves in these characters because Carrie’s projected real feelings into these characters.” Sheryl Berk 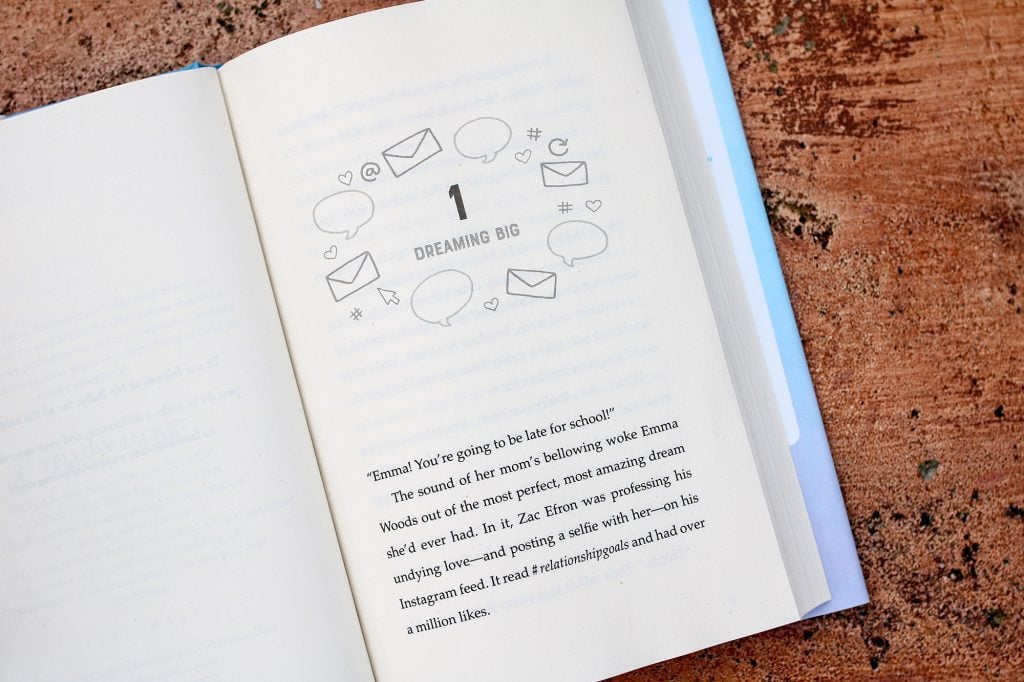 Coincidentally, Lucia wrote her first blog post last year about cyberbullying. It was a great way for her to get her feelings out after experiencing something that was new and scary for her.  While she’s always loved to write in journals and write non-fiction stories for school, Ask Emma inspired her to start her own blog, The Super Teenage Life.  I’m so incredibly proud of her and can’t wait to watch her develop her love of writing.  I can only hope that she will be half as successful as Carrie and that she and I will have the close relationship that Sheryl and Carrie seem to have. 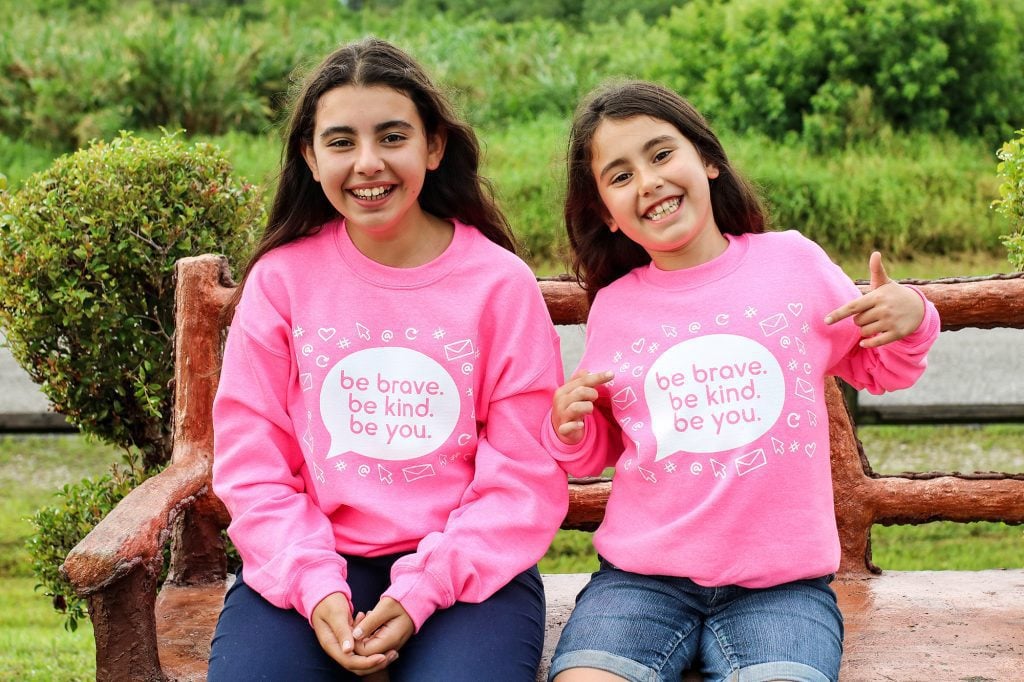 I want to thank Little Bee Books for giving us this opportunity and Sheryl and Carrie Berk for speaking to us and for writing books that can positively influence their readers to be better people and to stand up for what they believe in.  It was such an honor and something we will never forget.  We can’t wait for book #2!  In the meantime, make sure you run out and get your copy of Ask Emma.

Have you or your kids ever had to deal with cyberbullying? Comment below and let us know! 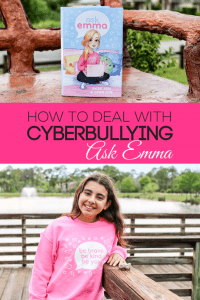 THINGS TO DO IN FLORIDA {SERIES} – Lion Country Safari

Change Your Life in the Time You Take a Sh*t

GoPeer Online Tutoring to the Rescue

Something My Teenager and I Can Agree On

A simple and fun Valentine’s Day idea for your kids! Just add a lollipop (or a few) and it will be a hit with all of their friends!