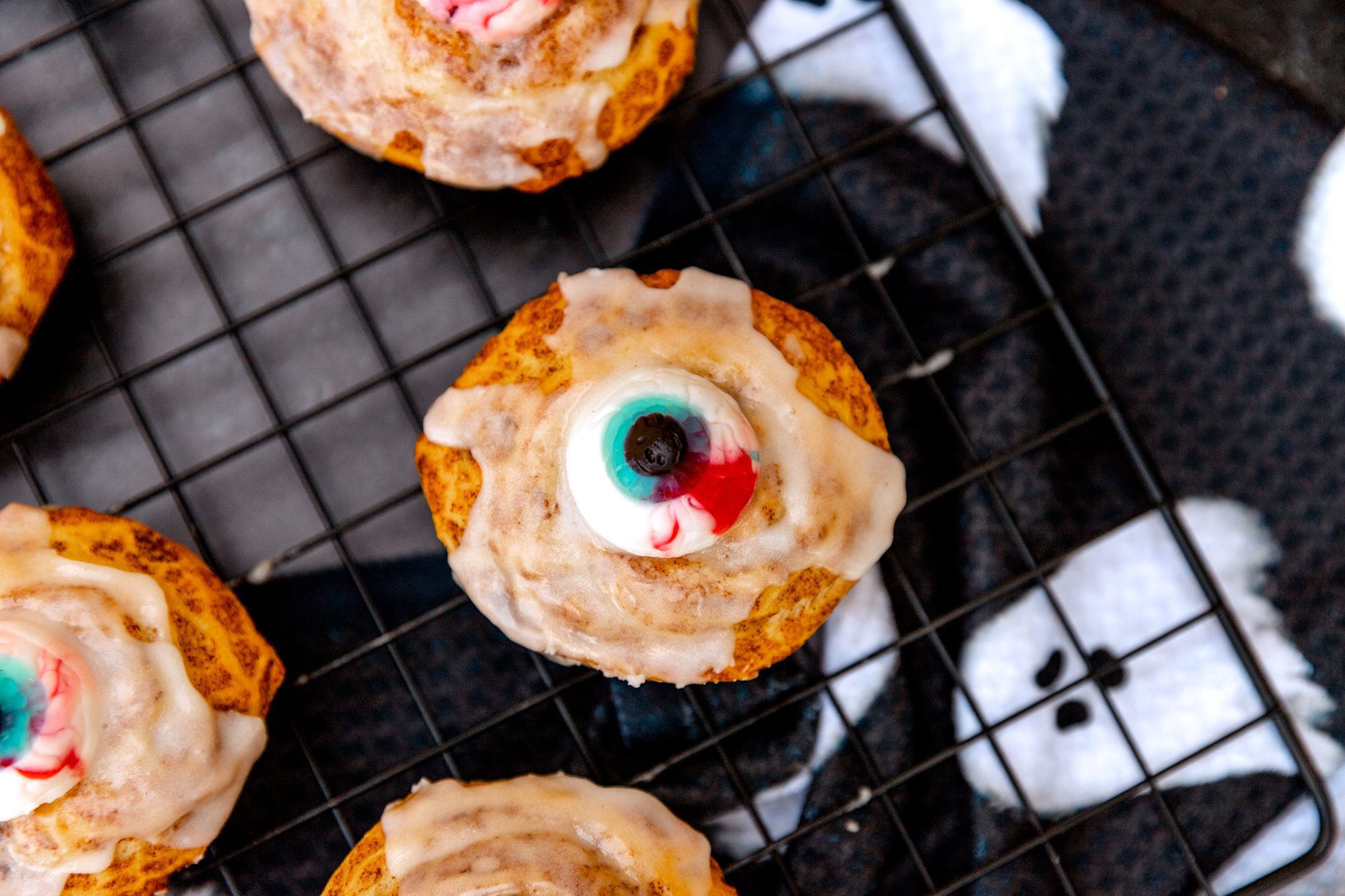 It’s almost Halloween, one of my most favorite times of the year. I love the costumes, the decor, and fun and spooky food! Like most parents, I’m swamped with responsibility and don’t have much time to bake most days. So, I like to provide fun, convenient, and fast options for people to create and bring a smile to their children’s faces. I’m so excited to share my newest creation — eyeball cinnamon rolls.

Two of my favorite quick and easy Halloween treats are vampire donuts and spider cookies. Both are made with ingredients you can buy in the store and don’t require baking or cooking. They are also Halloween treats that your kids can help you create.

This year, I had been brainstorming for months. When I went to Target in September, I picked up a bag of gummy eyeballs and knew I had to use them for this year’s Halloween treat. These eyeballs were super realistic and would level up any Halloween treat.

My initial idea was to split some Oreo cookies and place the eyeball on each half. But the more I thought about it, the more I thought it was too dull. Though, if you are in a time crunch and have to come up with something a few minutes before you walk out the door to a Halloween party, by all means, try that.

So I watched a commercial for cinnamon rolls, and a lightbulb went off — two ingredient eyeball cinnamon rolls would be a fun idea. So I tested them out that same day and was pleasantly surprised to see that the cinnamon rolls were actually shaped like an eye.

I brought one to my 9-year-old; she couldn’t believe how cool it looked. I knew we had a winner. The bag of gummies and cinnamon rolls costs under $8, so these eyeball cinnamon rolls are budget-friendly too!

You can use any brand of cinnamon rolls. My local grocery store often has a BOGO offer for one of the brands, so that would be a great time to pick some up and bring down your cost.

Make sure to put the icing on each cinnamon roll as soon as they come out of the oven. That will help the icing to melt and serve as the glue for the eyeball gummy.

While the instructions don’t say anything about lining or greasing the baking sheet, I like to line mine with parchment paper. It is easier to remove the cinnamon rolls once they are cooked, and it also catches the icing, so it doesn’t get all over the baking sheet.

You can use any eyeball gummies that you find. I found these at Target. They are the Hyde and EEK! Boutique brand. You can usually find them in the Halloween section.

What are the steps to make eyeball cinnamon rolls?

These eyeball cinnamon rolls are a super easy, two-ingredient dessert that is perfect for Halloween. Your little ones will love how spooky they are, and you will love how easy and quick they are to make!

We’d love to hear your thoughts if you try our eyeball cinnamon rolls. If you take a picture or share it on social media, don’t forget to tag us! Don’t forget to check out all of our Halloween ideas!