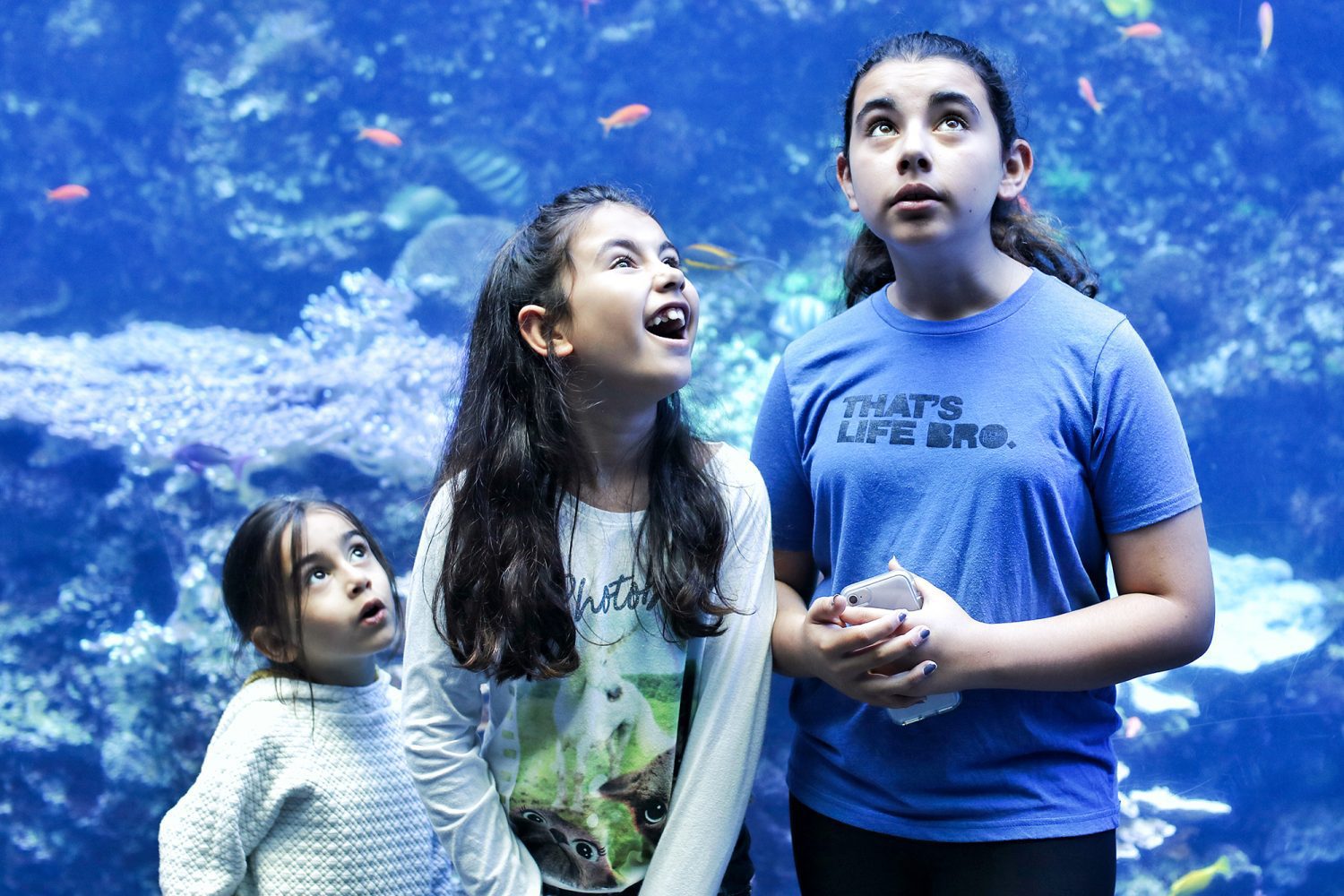 Over the last few years, I’ve been hearing from so many people about this aquarium that we HAD to visit.  They would describe it with terms like “amazing”, “huge”, “a must-see”…   They all told me that the girls would love it and that we would have to take the eight and a half hour drive.  In January, I finally decided that we were going to the Georgia Aquarium and wound up turning it into a family road trip that we will never forget. 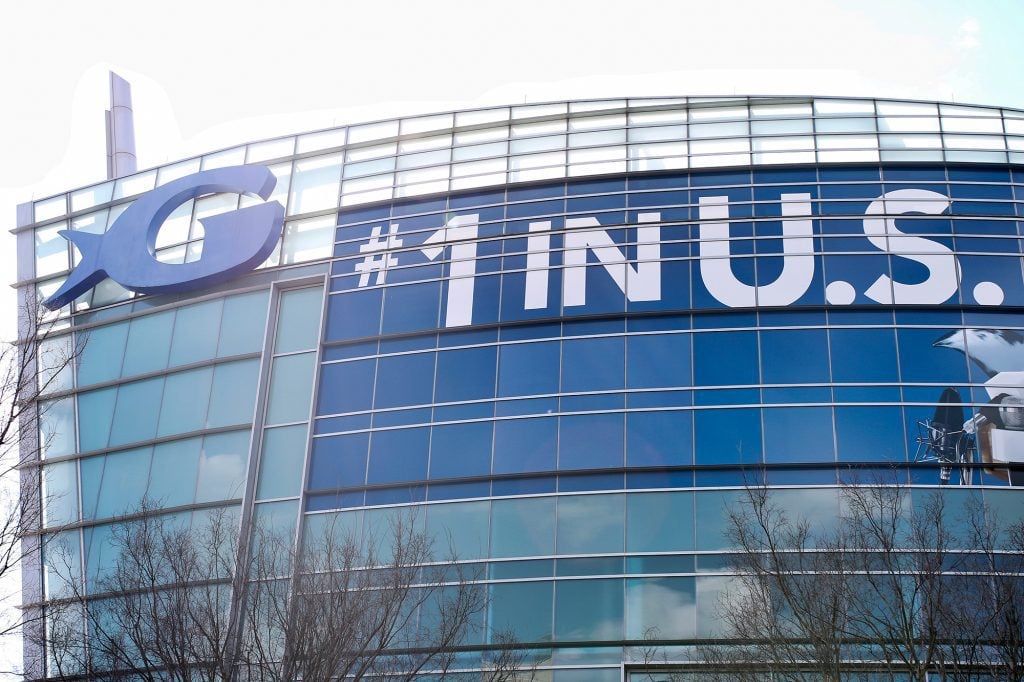 We arrived in Atlanta last Monday night and once we checked into the Hilton Garden Inn, we spent about an hour walking around Downtown Atlanta, We were just minutes from Georgia Aquarium and had to check it out, even though they were already closed for the night.  We couldn’t believe the size of the building itself.  We learned that Georgia Aquarium is the largest aquarium in the Western Hemisphere with more than 10 million gallons of water.   That’s a whole lot of water! And they aren’t done.  They plan a huge expansion in 2020 which means we’ll have to return and check it out! 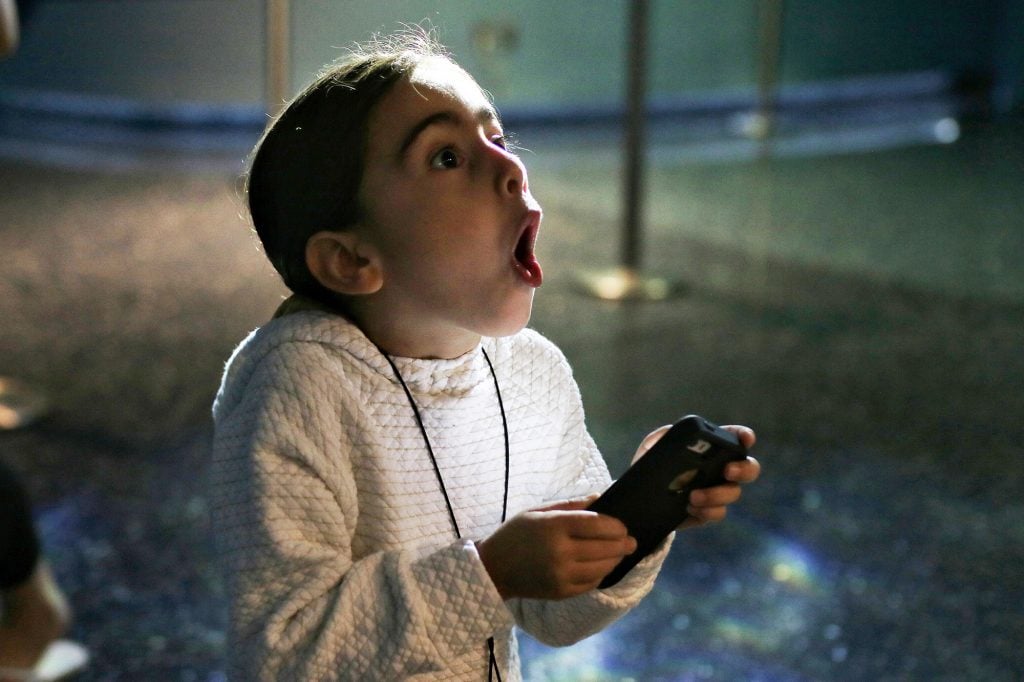 We arrived at Georgia Aquarium early on Tuesday morning, excited about what was in store.  I was lucky enough to catch Falynn’s expression as she walked in for the first time.   This one picture completely set the tone for the day ahead.  There was a lot of pointing and surprised faces throughout our visit.  All three of the girls couldn’t wait to see more and Georgia Aquarium definitely didn’t disappoint. It’s no wonder they were named Top Aquarium by Trip Advisor! 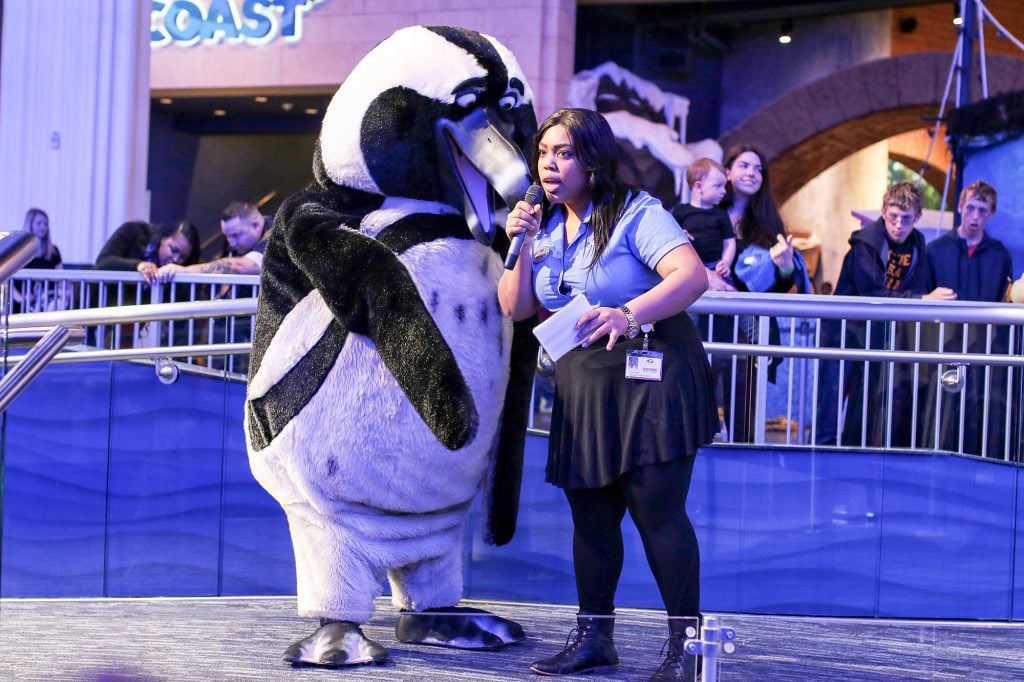 We started the day off at the Waddle Walk, which allows you to see African penguins up close.  Everyone gathered around and waited for the arrival of this amazing species.  The girls were especially excited about it because they had never been that close to a penguin before.   We recommend getting there about 15-20 minutes early because the crowds may make it difficult for your little ones to see (unless they are sitting on Dad’s shoulders like my little one was). 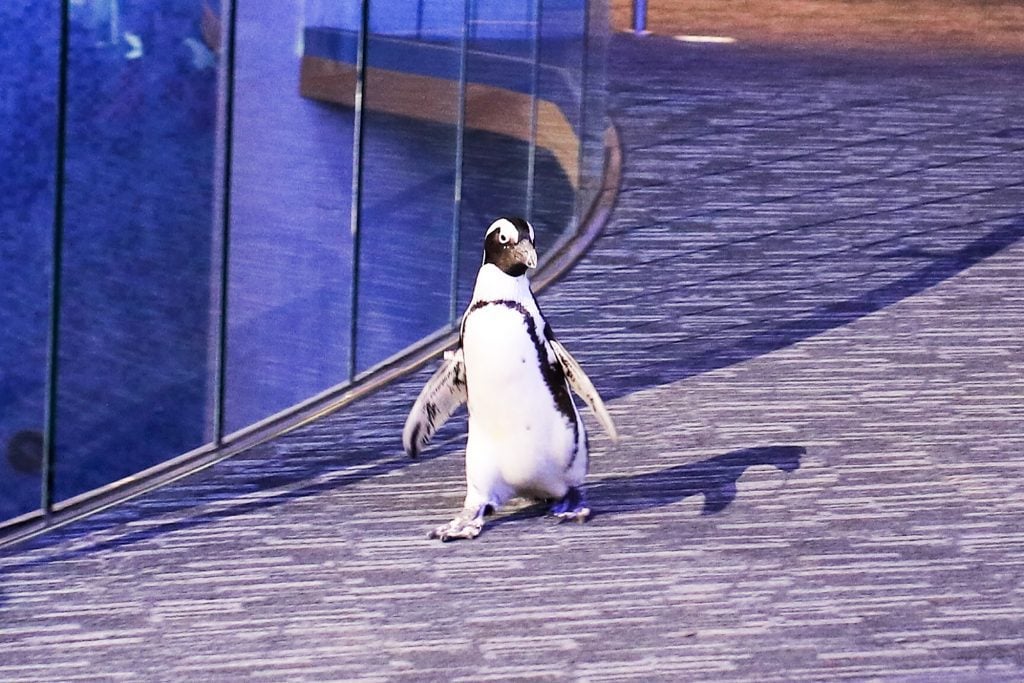 Once they got the crowd pumped up, 2 trainers walked out with two adorable little African penguins.  As they strolled down the ramp, they talk about this endangered species, the Aquarium’s preservation efforts and how we can help protect these beautiful birds.  My girls were oohing and aahing at every move they made.  They were even cuter than we could have imagined.

Another must see was the AT&T Dolphin Celebration experience! There is no photography allowed once the show starts, so I can’t share any photos, but it was definitely Iyla and Falynn’s favorite part of the day.  Iyla even mentioned that she wants to learn how to swim underwater so that she can be a dolphin trainer one day.

The presentation is a fun and exciting experience that showcases dolphin behavior and their relationship with their trainers while incorporating important educational messages. We definitely suggest that you arrive at the theater at least 30 minutes prior to the showtime as it fills up really quickly.  If you want to get wet, make sure to sit in the first 10 rows which is designated as “the splash zone.” 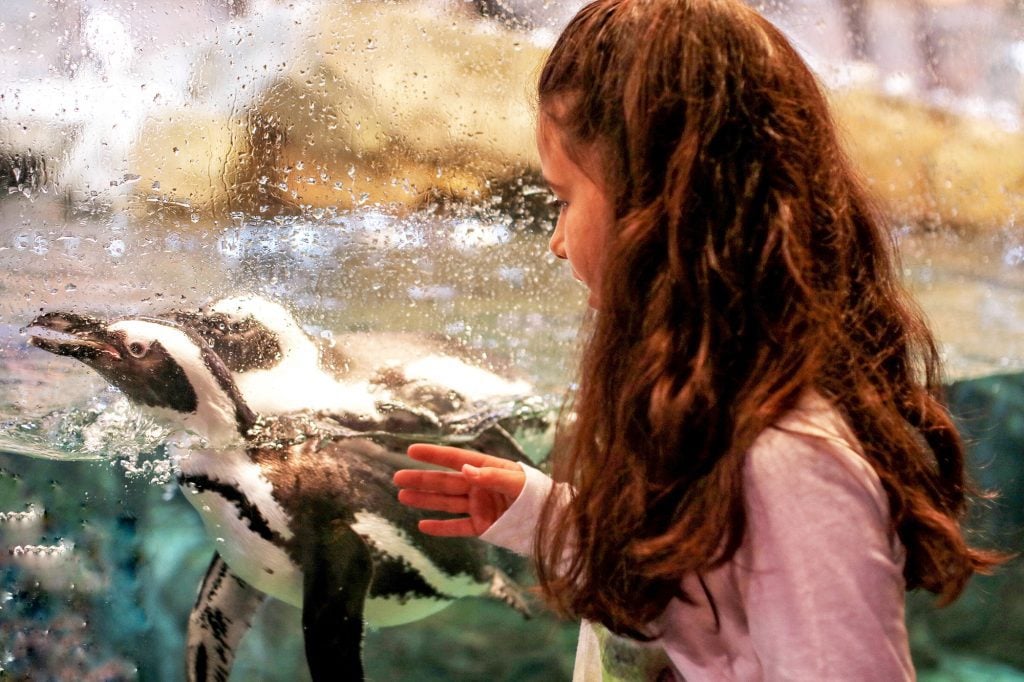 Next, it was off to Cold Water Quest to see the penguins exhibit, which features more than 25 nesting areas integrated into naturalistic rockwork and comes equipped with a state-of-the-art lighting system that mimics the natural light cycle from twilight to moonlight.  The girls loved going into the tunnels and popping their heads up in the acrylic windows to see the penguins up close and personal. It’s a great place for a photo opp too. 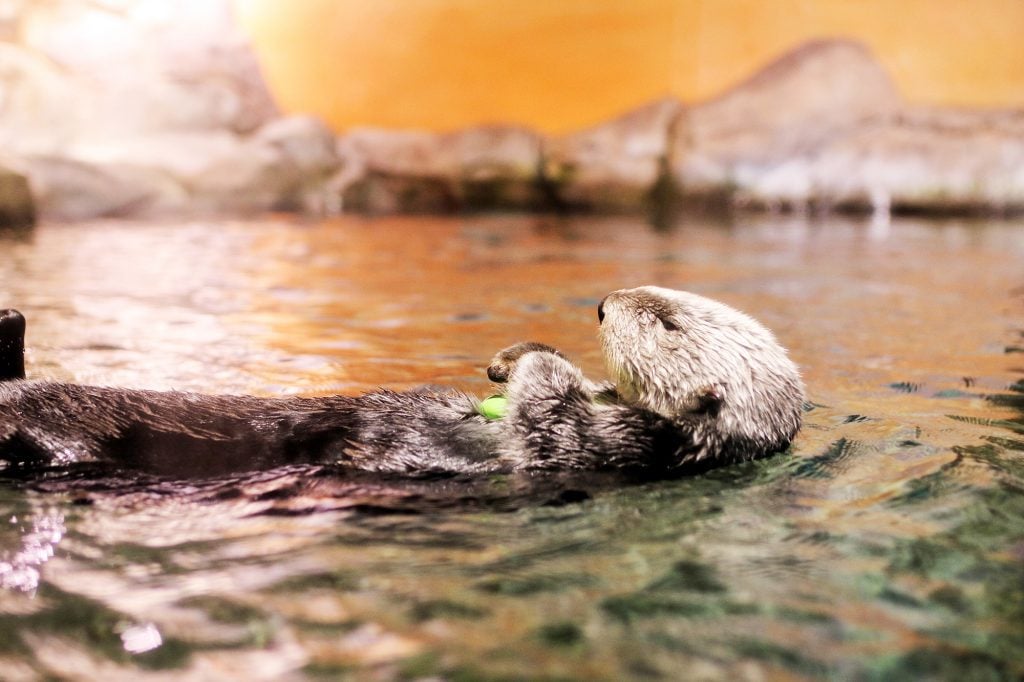 Lucia’s favorite part of the entire day had to be the Southern sea otter exhibit.  These adorable little guys were floating around, holding their toys and being playful and so cute.  I felt like they were posing for pictures, giving me the cutest shots.  We could have watched them all day.  This particular exhibit has doubled in size and has been modified to include additional deck space for trainer-animal interactions. New to the exhibit, a sneak peek window has been added, giving guests a look into the behind-the-scenes area for the sea otters. Did you know that the Southern sea otter belongs to the same family as weasels and wolverines? 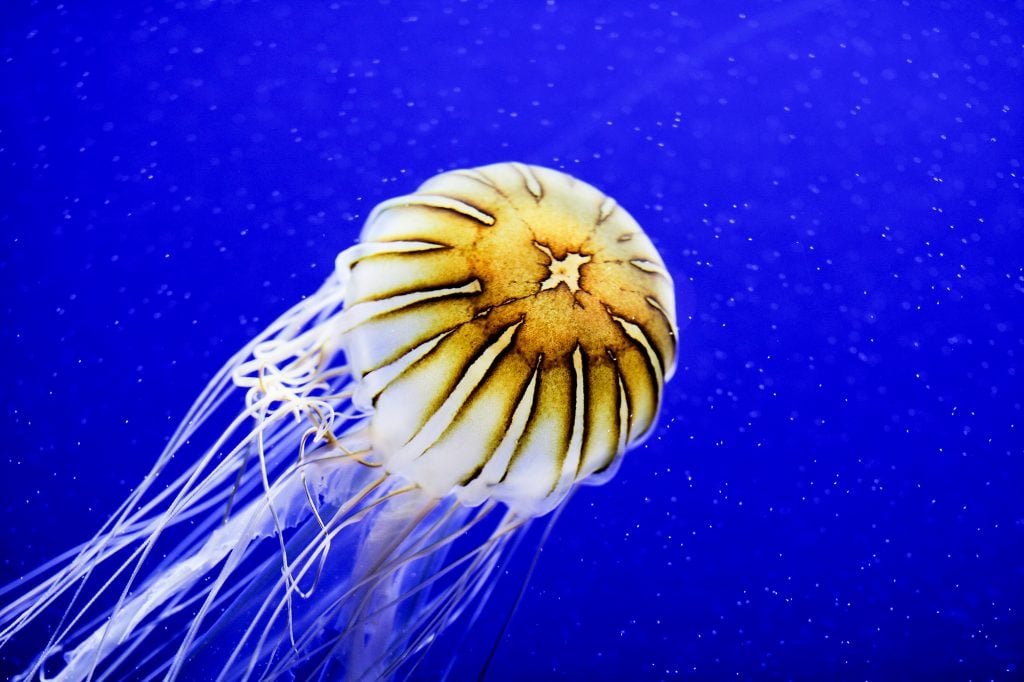 Tropical Diver is the largest living reef exhibit of any aquarium. It is home to living corals and thousands of colorful reef fish.  It’s definitely the most relaxing of the exhibits which are appropriately arranged like a gallery of living art. My girls were excited to search for Nemo and Dory (they found both) as well as seahorses and other jewels of the sea.

My favorite part?  The three impressive exhibits of jellies (“jellyfish”) which totally mesmerized us all. I had seen jellyfish before, but never like this.  They were each more amazing than the other.  We noticed that one had a heart shape, another a star… and I must have taken a hundred pictures of them.  They are seriously fascinating and stunning creatures. 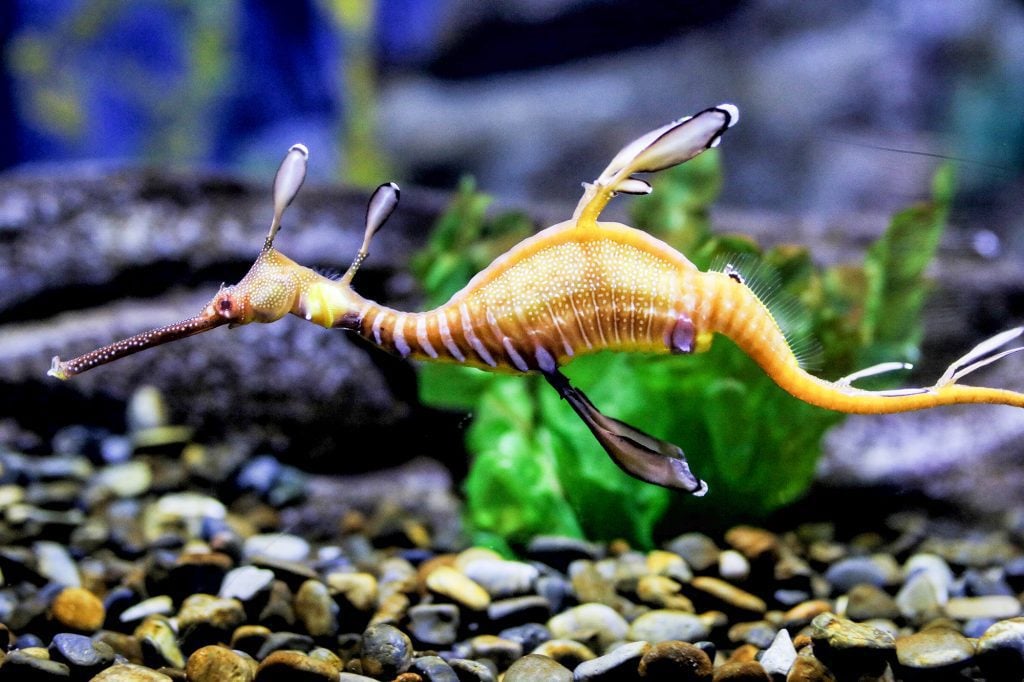 Another of our favorites was the seadragon which is related to the seahorse.  There was a small crowd around their tank, just staring at them, trying to figure out if they were real.  They literally looked like sticks falling from the top of the tank to the bottom. They also had this fascinating propellor-like fin around their neck that we just couldn’t stop staring at.   It was something I never knew existed. 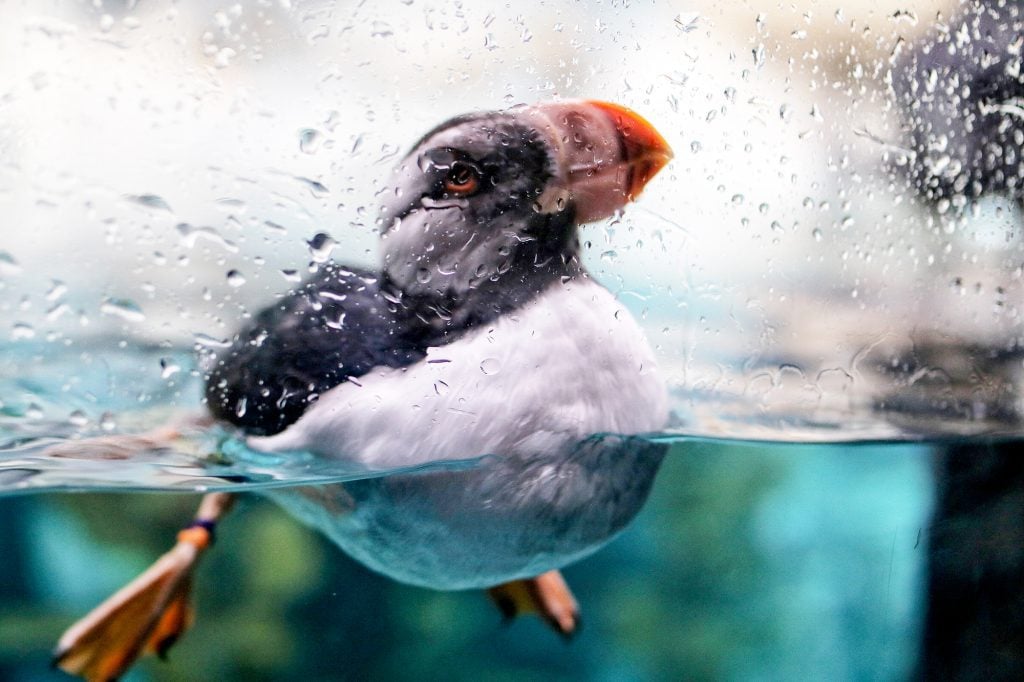 These adorable seabirds are the newest addition to Georgia Aquarium. Puffins are only about 10 inches tall and weigh less than a pound! These diving seabirds “fly” underwater to catch their prey. And as you can see, they are also very adorable!  We spent quite a while watching them and they seemed to get up close and personal with us.  Perhaps they were posing for the camera?  Did you know that puffins swim by using wings to “fly” under water? 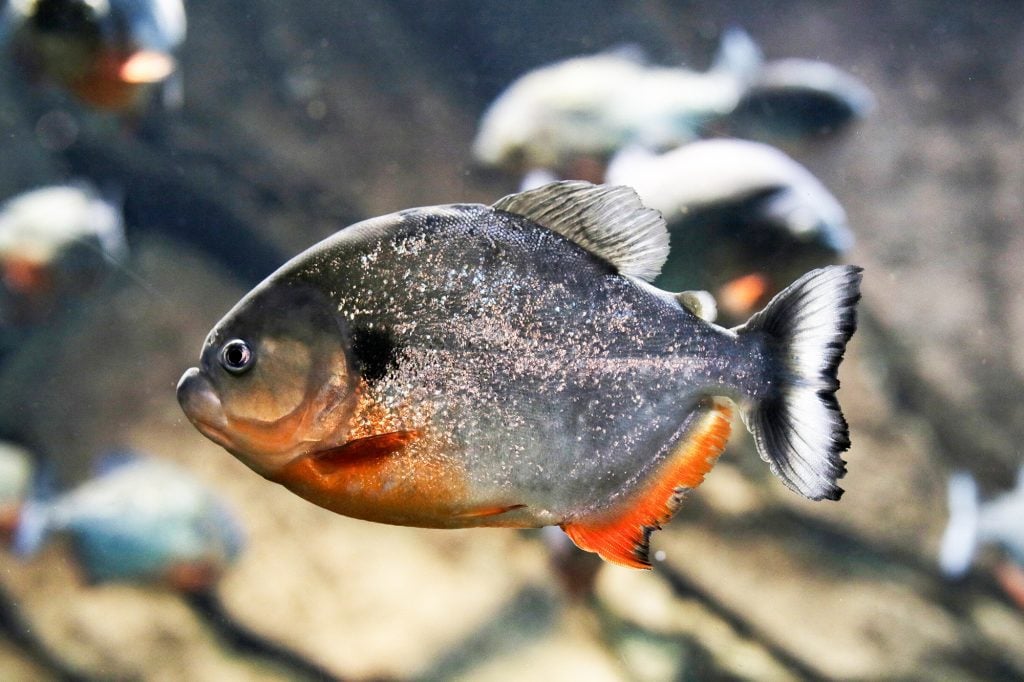 We found this fish almost immediately. The girls were immediately intrigued by it’s glittery appearance.  I believe we called it a “glitter fish” for quite a while, until I looked it up and found out it’s actually a black spot piranha!  As with other piranhas, this species has very sharp teeth that can inflict serious bites.  So, don’t let the sparkly appearance fool you! 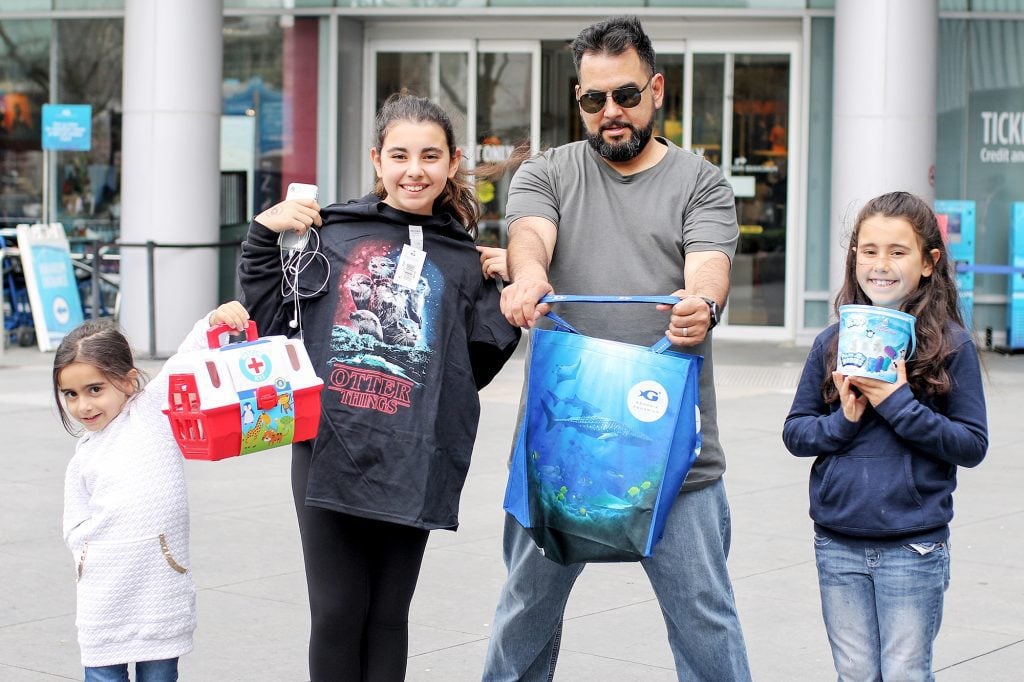 Ending the Day in the Georgia Aquarium Gift Shop.

Of course, no trip is complete until we’ve visited the gift shop.  The girls were able to choose one item to remember their day at Georgia Aquarium.  Dad and I even got ourselves a little something, a reusable water bottle so we can do away with the plastic ones we had been carrying around.  They actually came in very handy for the remainder of our trip!

I can honestly say that Georgia Aquarium was worth the trip.  While we spent the entire day there, I’m sure there are still things we didn’t get to see!  On our next visit, we plan to check out the Dolphin Encounter to get up close and personal with the dolphins!

Have you ever been to the Georgia Aquarium?  Comment below and let us know! 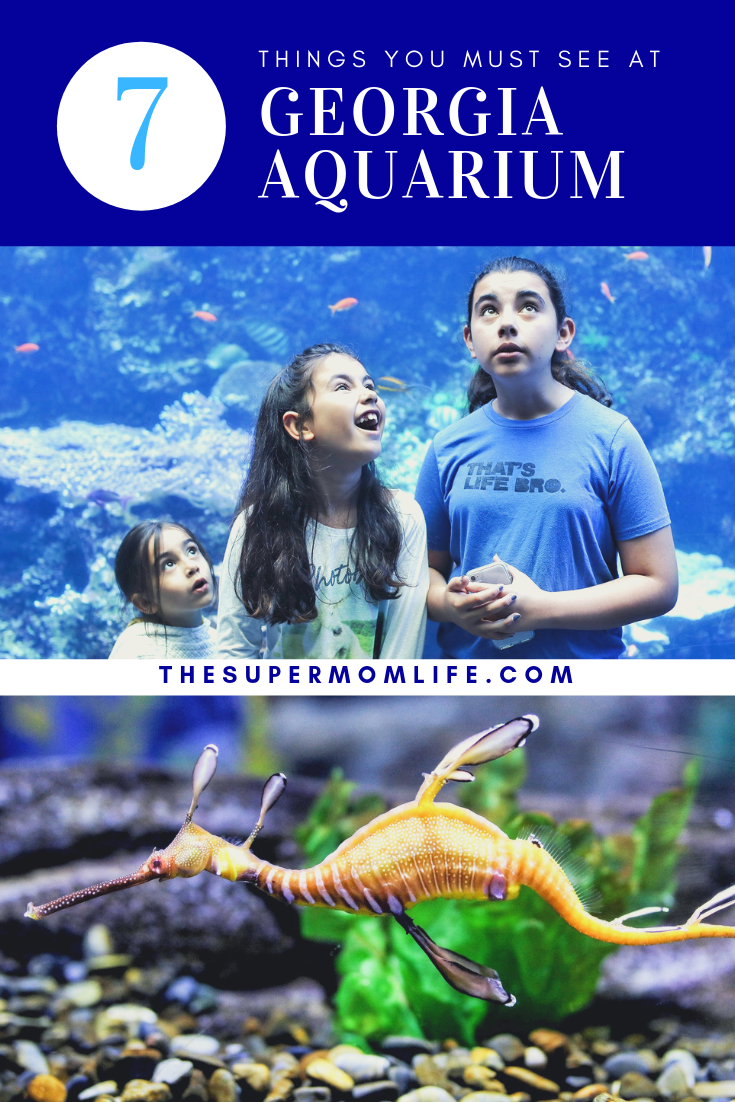 This post is sponsored by Georgia Aquarium and we were given free admission in exchange for our review, the content and opinions expressed here are all my own.