Halloween is right around the corner. Every year, Falynn makes a list of things she wants to dress up as and then changes her mind multiple times until Halloween night, when she usually decides on a totally different option that she hadn’t considered. It’s exhausting. And even though she waits until the very last minute to make a decision on her Halloween costume, she always seems to win the costume contest so there’s a lot of pressure to outdo the previous year. This year I was on a mission to find something she would love and I was lucky to have found Suitables.

Suitables is a California-based company founded by an adamant toddler, sort of by accident, through a homemade Halloween costume build in 2014 that resulted in discovery of a need for something new, innovative, environmentally friendly/recyclable, and above all, FUN! They offer a number of unique costumes that are easy to build, and even more fun to play in.

How to Choose The Perfect Halloween Costume

When choosing the perfect costume, there are certain things that are non-negotiable for us, which include originality, the wow factor and above all, comfort. If a costume can check off all three, it’s the perfect Halloween costume for our kids! 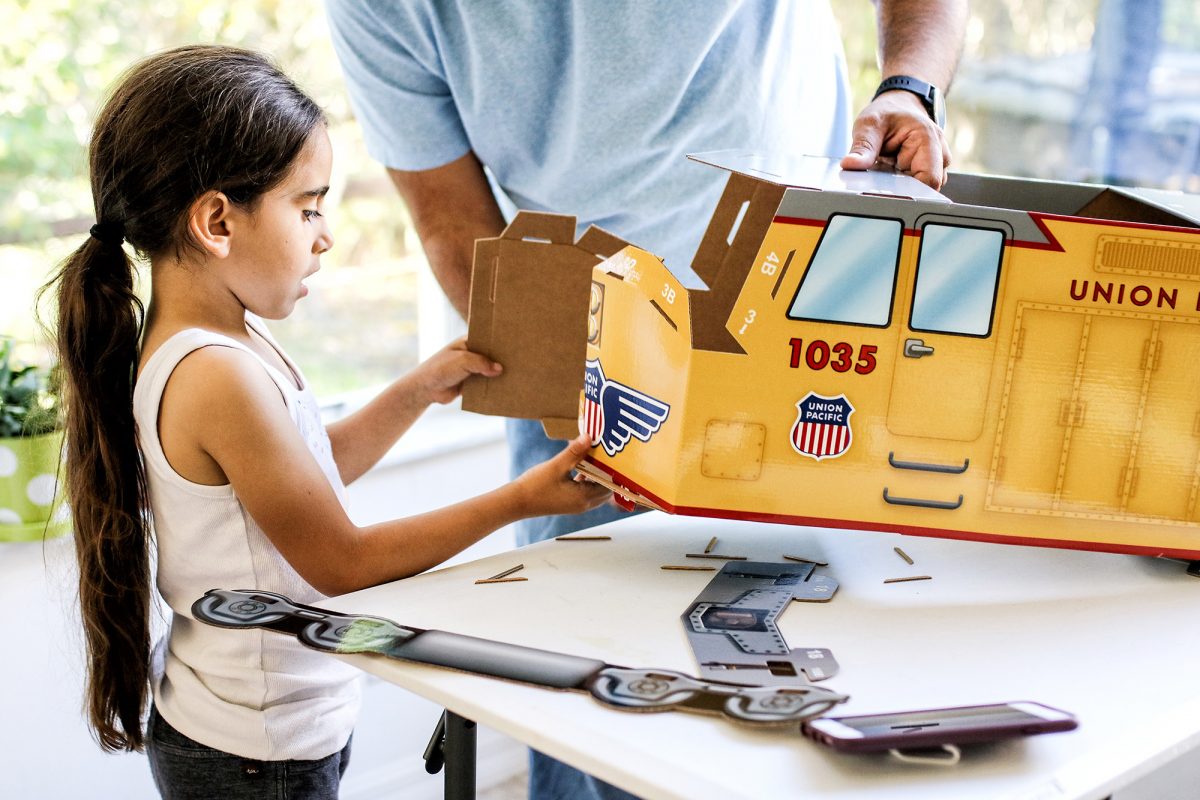 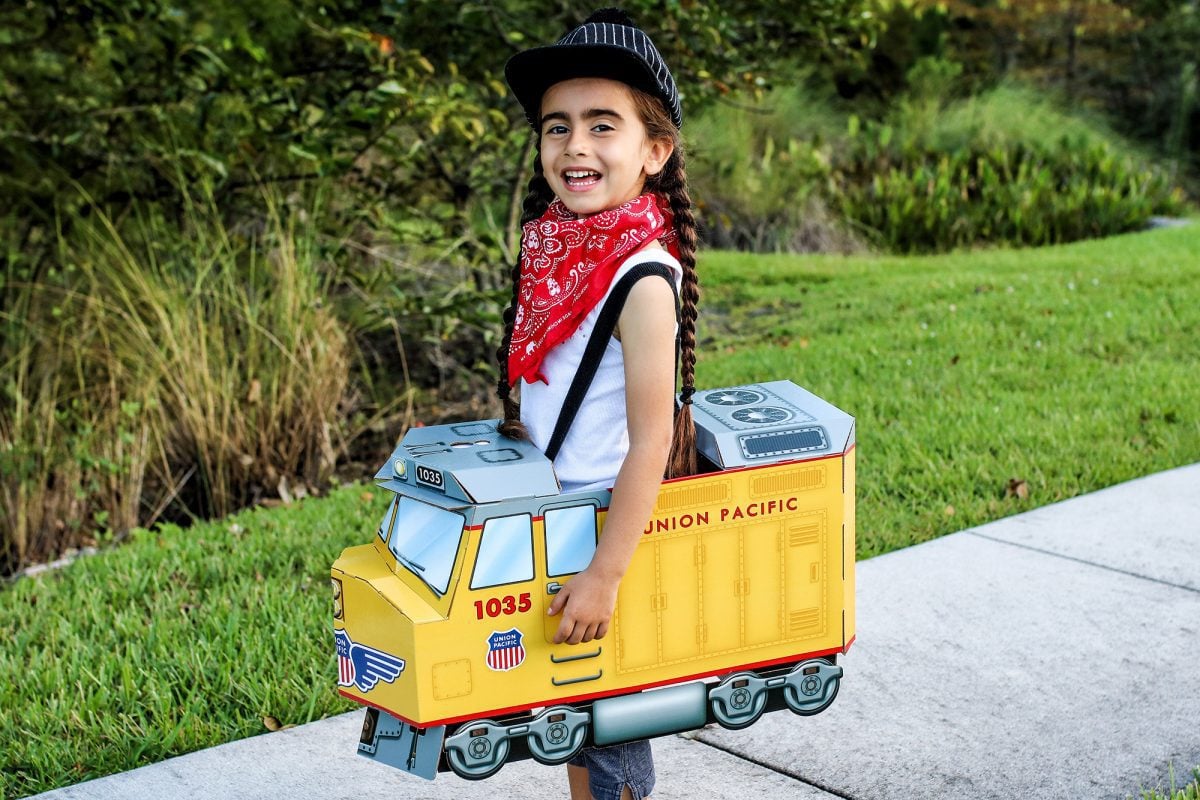 Like most kids, Falynn doesn’t want to have the same costume as anyone else, so going into a store and choosing one just isn’t an option for her. I had her check out the Suitables website. She loved all of them, which is a first for my choosy little one. She’s not your typical girly girl and I love that she can imagine herself as a pilot, an astronaut or a construction worker. While she would have been thrilled with any of the options, she wound up getting the diesel train, cinderella coach and firetruck.

They arrived in a flat cardboard box which includes all of the pieces you need and a piece of paper that directs you to their youtube channel, with a step by step video that guides you through how to put each one together. Falynn loved working with us to create her costumes and it turned into a fun project for us to do as a family, which was an unexpected but pleasant surprise. I am the worst when it comes to DIY costumes so this made me feel as though I was one of those awesome DIY Moms, though Suitables did all of the hard work by providing all of the materials and instructions.

The diesel train checked off originality not just with it’s appearance, but with it’s built-in sound. As we walked through the neighborhood, testing out the costume, she pushed the button and the sound of a train got everyone’s attention. We paired it with a bandana and a hat and voila, the cutest train conductor you’ve ever laid your eyes on. I can’t remember the last time a kid in a diesel train walked up to my door on Halloween, so this one is definitely a strong contender! 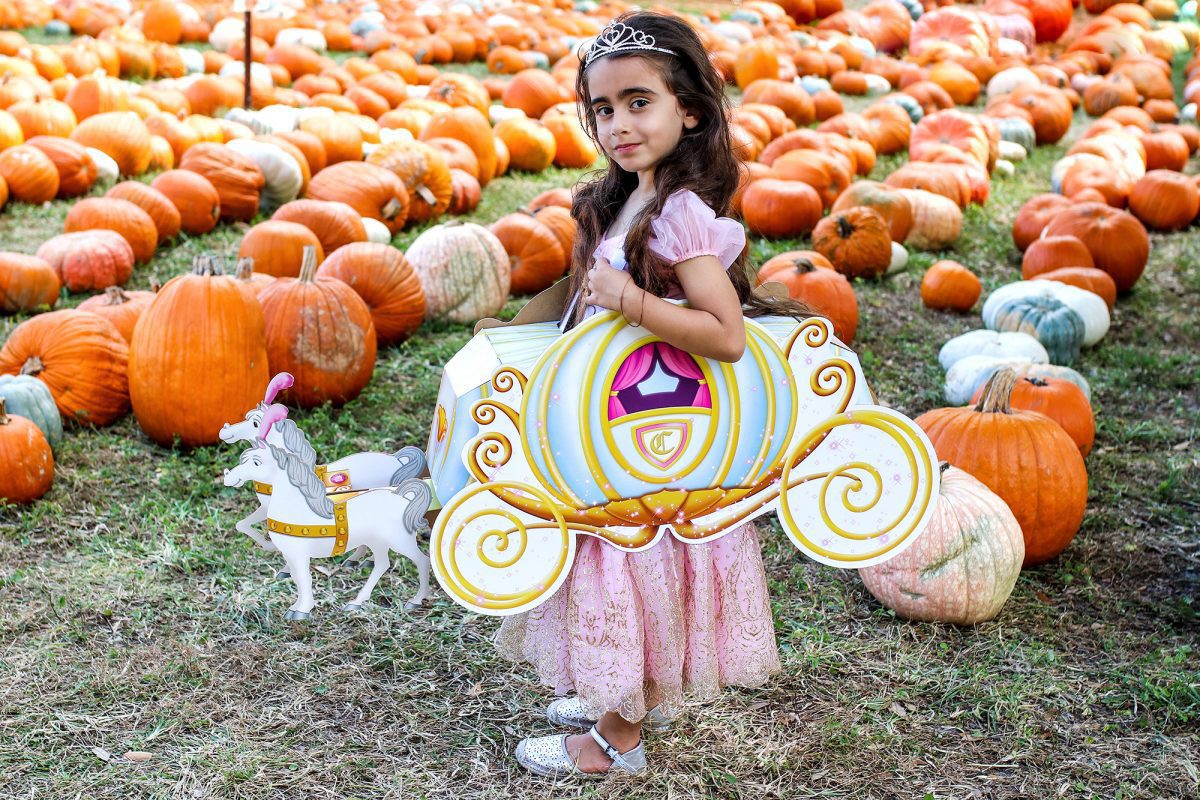 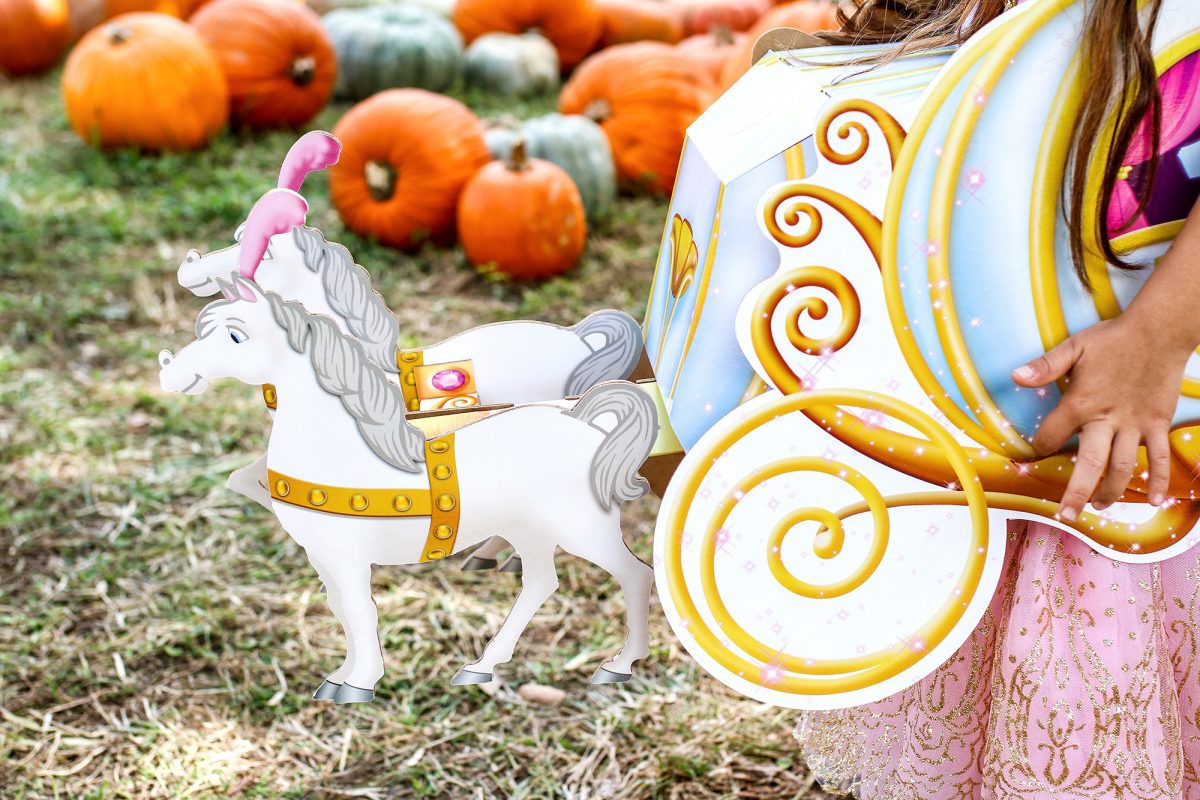 Next was my choice, the cinderella coach. While it would normally be a little too girly for Falynn’s taste, she really wound up loving it, once it was on. We paired it with a princess dress we had in the house (thank goodness for years of dance recitals) and a tiara from Amazon.

Falynn was the hit of the pumpkin patch as she walked through and waved to her fans, as though she was royalty. Falynn said she felt like she was straight out of a storybook and while there may be a lot of princesses on Halloween night, she will be the only one with her very own horse drawn carriage. Like the other two options, the cinderella coach definitely has the wow factor. People couldn’t get enough of it. 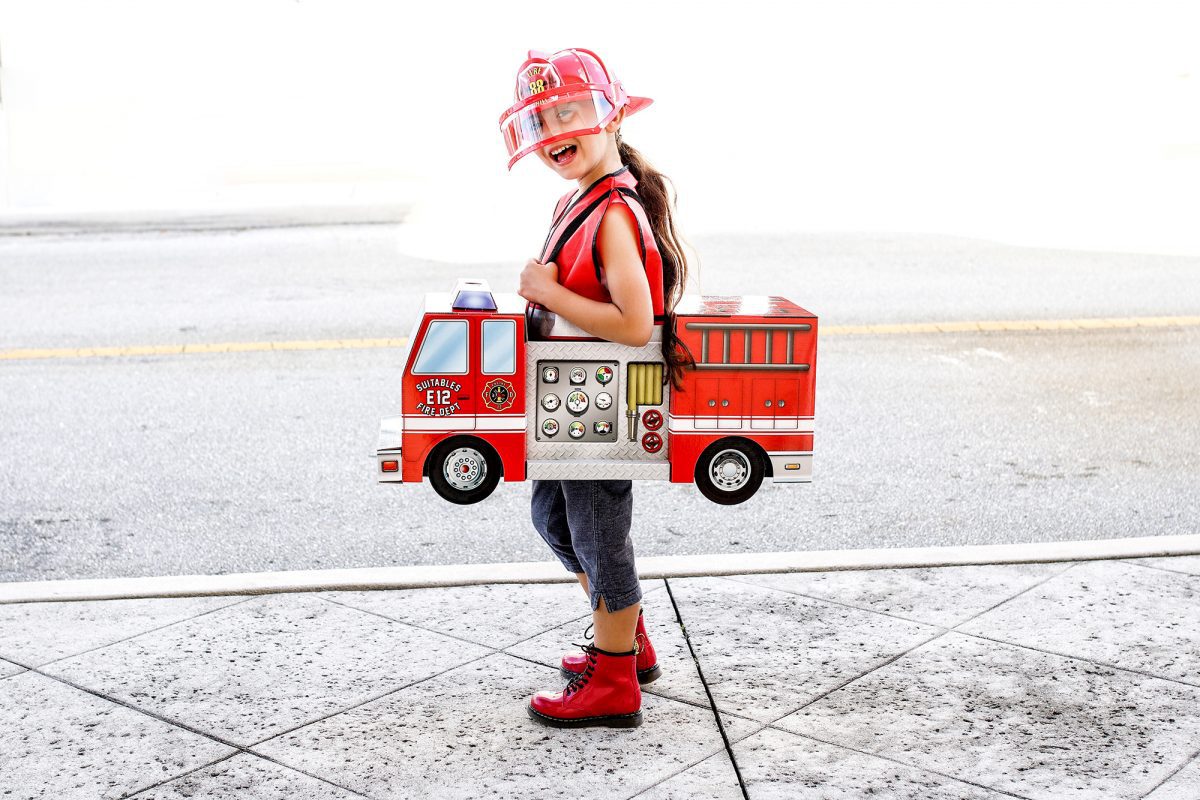 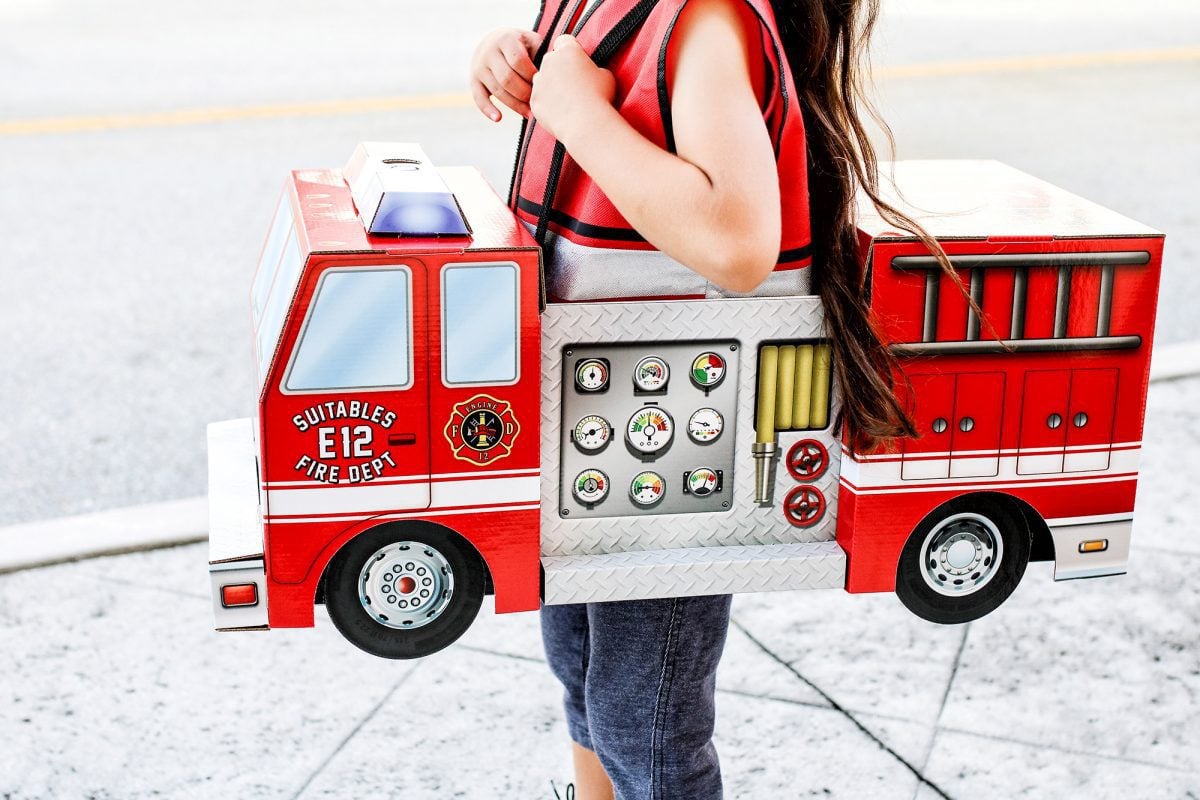 Finally, Falynn’s absolute favorite was the fire fighter costume. This awesome firetruck also has sound effects that made it that much cooler. As we walked around, two different kids stopped to tell her how cute she looked. We paired it with a firefighter hat and vest from Amazon.

All three of the Suitables costumes we received are great quality and aren’t too heavy. The boxes themselves fit easily over Falynn’s head and were just as comfortable as they were adorable. I was concerned about Falynn being able to walk around comfortably in what is essentially a cardboard box, for a long period of time, but she didn’t complain once. In fact, she said they were light and didn’t bother her at all. When your child is in a costume for hours, you want them to forget they’re wearing a costume. If you give them something uncomfortable, chances are they’ll be asking to change before you get to where you are going or you’ll be carrying around their costume all night.

While we would normally not have a definite option at this point, we now have three. Which of the three Suitables costumes do you think Falynn should choose this year? The diesel train, cinderella coach or fire truck? Or, should she just change every half hour and rock them all? Comment below and let us know! 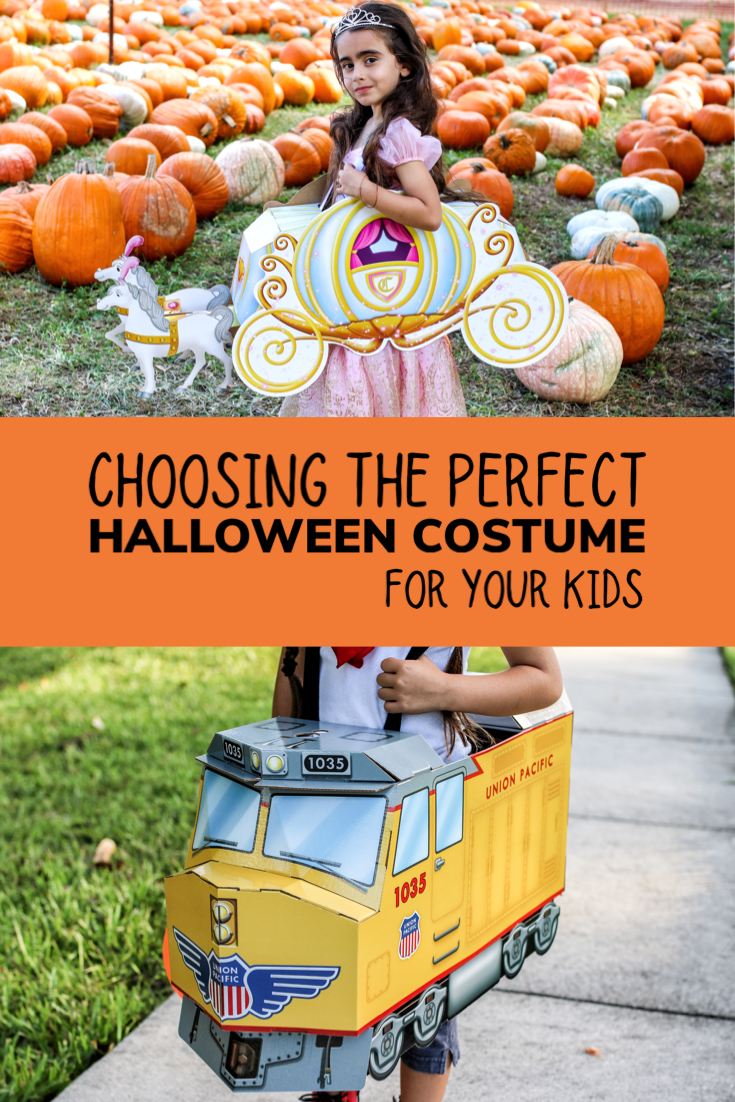 *This post is sponsored by Suitables but all opinions are my own.