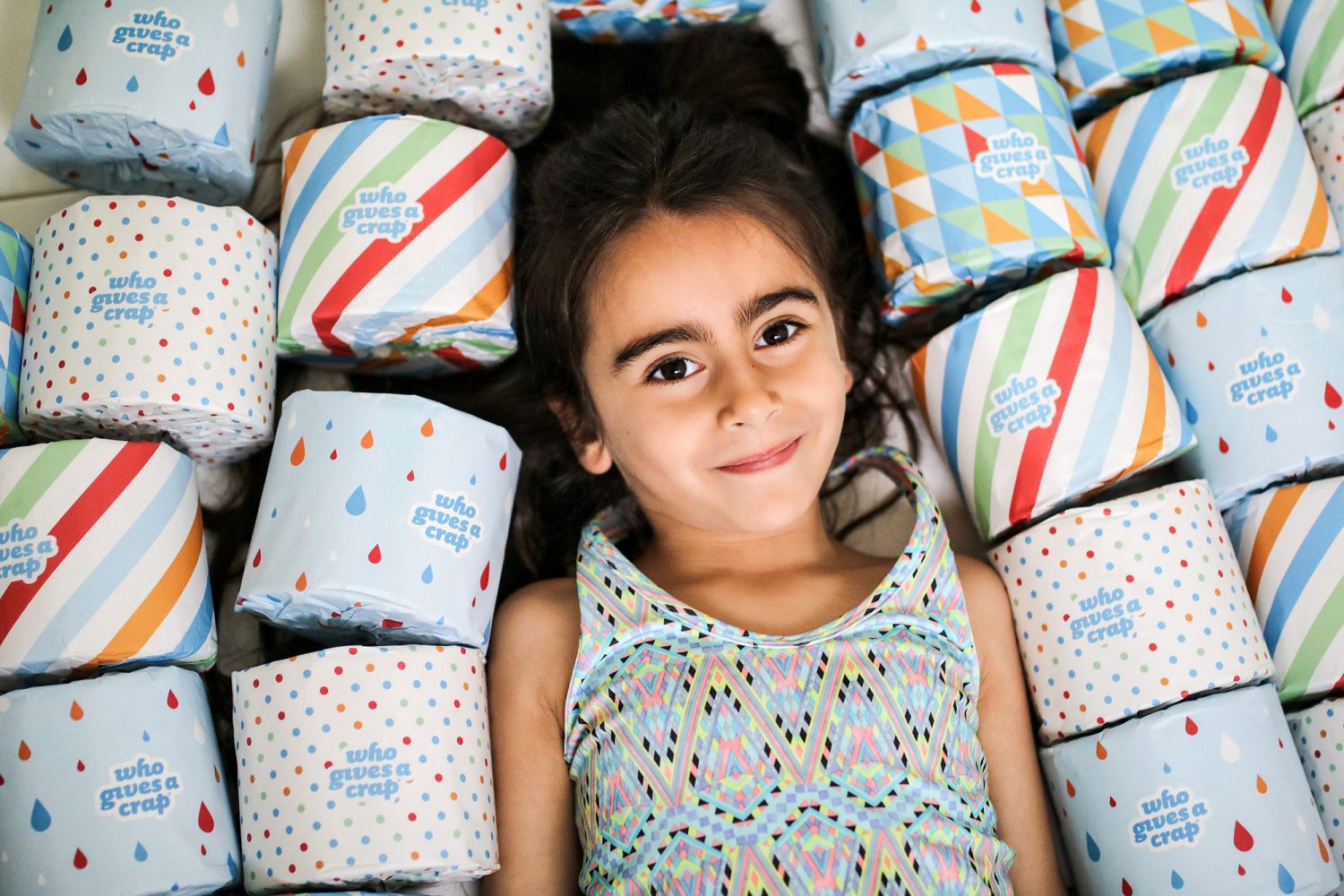 Toilet paper.  It’s one of those things that we have to buy. There are different brands, different textures, different lengths and different thicknesses.  As a family, we’ve probably tried them all and we go through much more than I could ever estimate. I’m pretty picky when it comes to what we wipe with. I remember a time, not long ago, when my husband brought home a cheaper brand and I lost it.  It was thin and rough and I couldn’t wait until we ran out so I bought a huge pack of a superior brand and let him use the cheap stuff. Don’t worry, he was totally ok with it.

This month, I was introduced to a toilet paper company that not only has an incredible sense of humor, but also has made it their mission to donate 50% of profits to help build toilets in developing countries.  It’s companies like Who Gives A Crap that make me want to shout from the rooftops and convince everyone to support them.  Who Gives A Crap was founded in Melbourne, Australia in 2012 after the founders learned that 2.5 billion people in the world don’t have access to a toilet.  Can you imagine that? We are all so used to having a toilet that it seems unfathomable for anyone to be without one. Props to founders Simon, Danny and Jehan for doing something about it. 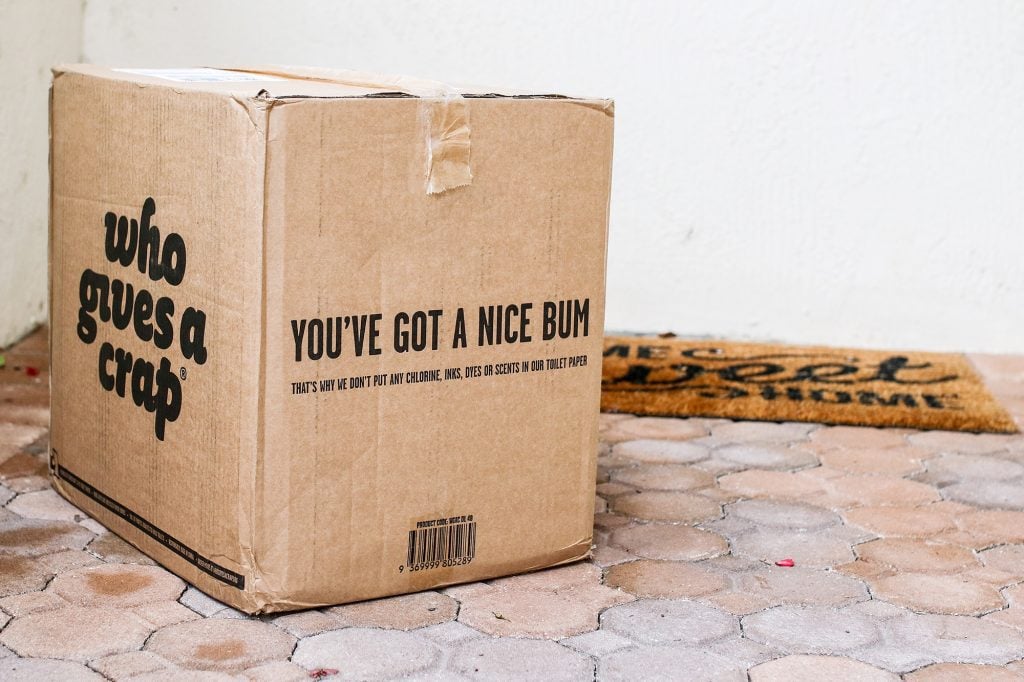 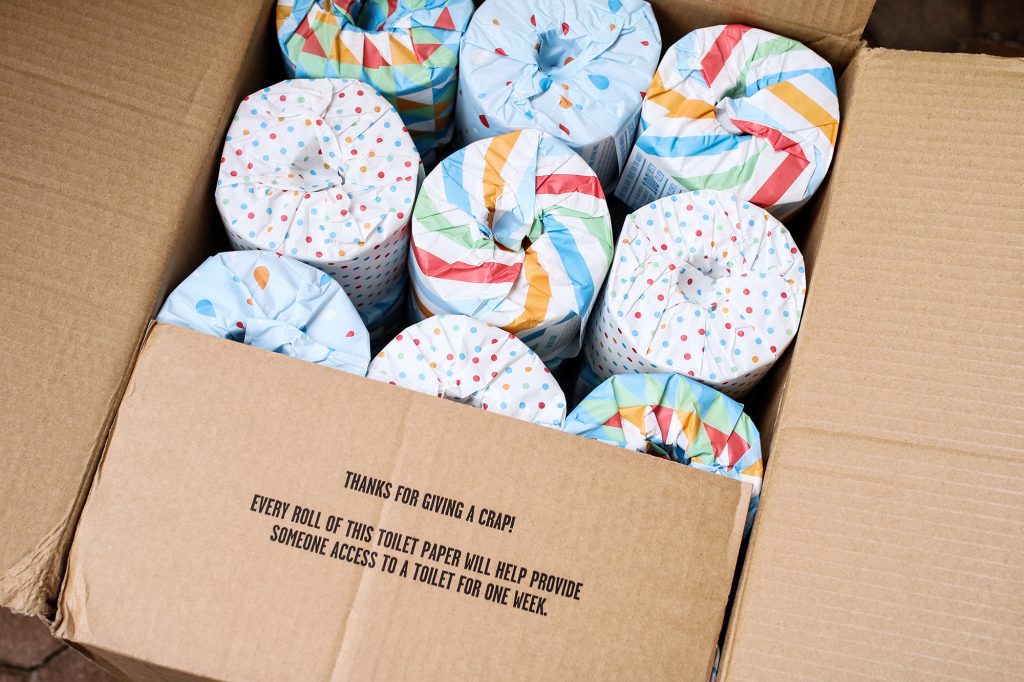 Last week, this huge box with the words “Who Gives A Crap” was delivered to my home.  I have to admit, that I wanted to leave it outside so that everyone could see it. While it was “just” full of toilet paper, it provided me with compliments I haven’t heard from a stranger since I had my first child almost 13 years ago.

Inside, I found 48 beautifully wrapped rolls of 100% recycled toilet paper.  I quickly unwrapped a few and switched out our current brand for Who Gives A Crap, in each of our bathrooms. And then I waited.  I wanted to see if anyone noticed a difference. Would they think that Dad had brought home the cheap stuff again?  Would they rush out of the bathroom with roll in hand, asking for their old brand back? Surprisingly, they had no idea.  And being that I’m the most picky when it comes to toilet paper, I was shocked that I found it was just as good as the brand I buy in the supermarket!  Actually, even better if you take into consideration the price and the mission behind the brand. 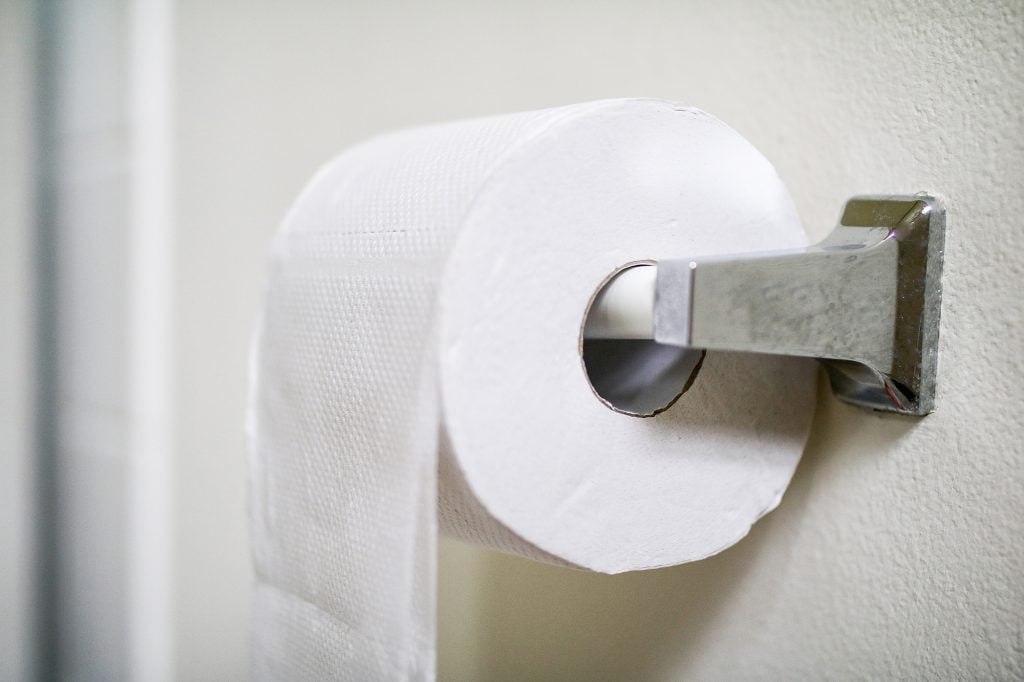 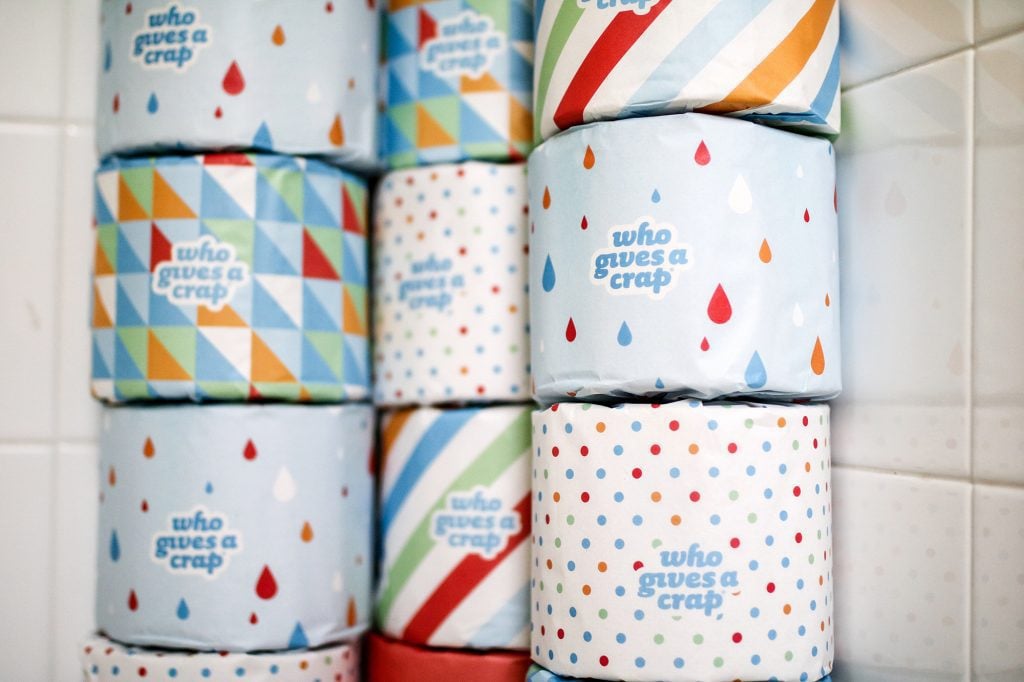 So once the test was complete, I let the girls have a little fun.  What’s the point of having these beautiful rolls if we aren’t going to have fun with them?! We stacked some in the bathroom (they are too pretty to hide in a closet or under the sink). The girls built castles with them (so much better than those little blocks that they leave on the floor so we can step on – ouch!).  They played catch in the middle of the living room. Falynn made a bowtie with one of the wrappers (because she is currently obsessed with bowties).

I was surprised to find them even a day later, still playing with these rolls of toilet paper like they were toys.  They had a contest to see who could build the highest tower without it falling over.  My 9 year old was wearing one of the wrappers as a hat. My oldest was trying to figure out how to combine multiple wrappers into a shirt.  What teenager wouldn’t want to wear a paper shirt that says “Who Gives A Crap” all over it?

Who knew that toilet paper could be so much fun?!  I sure didn’t! 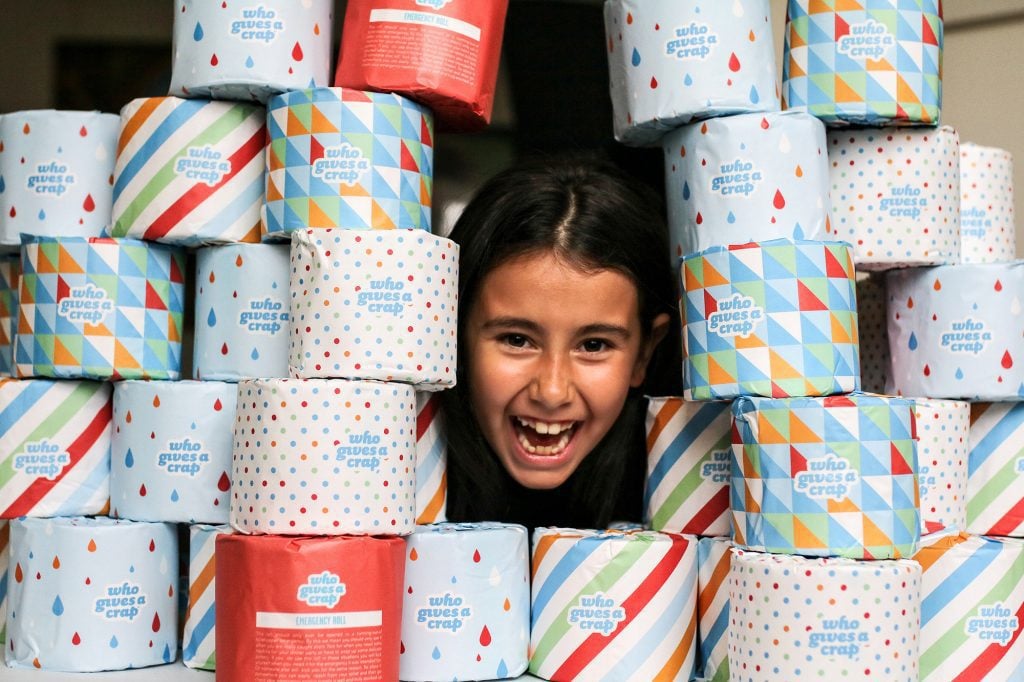 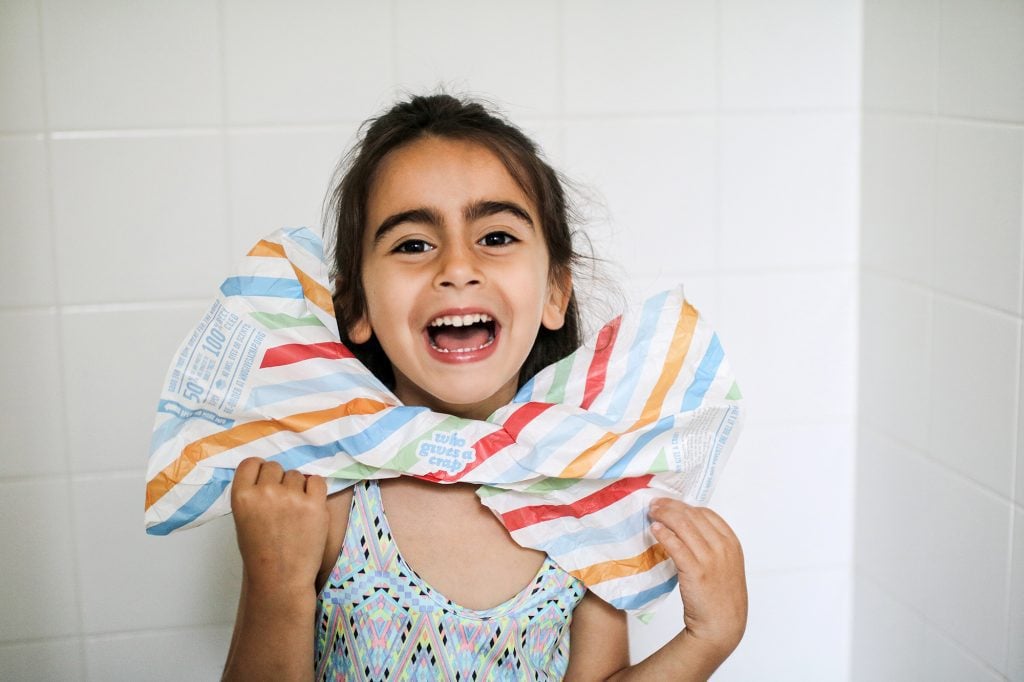 Not only is Who Gives A Crap a light-hearted company with a huge heart, they’ve already donated over $1.2 Million Dollars to their charity partners (that’s the equivalent of over $950,000!). That’s pretty impressive!

Here are some eye-opening toilet facts that I learned, thanks to Who Gives a Crap: 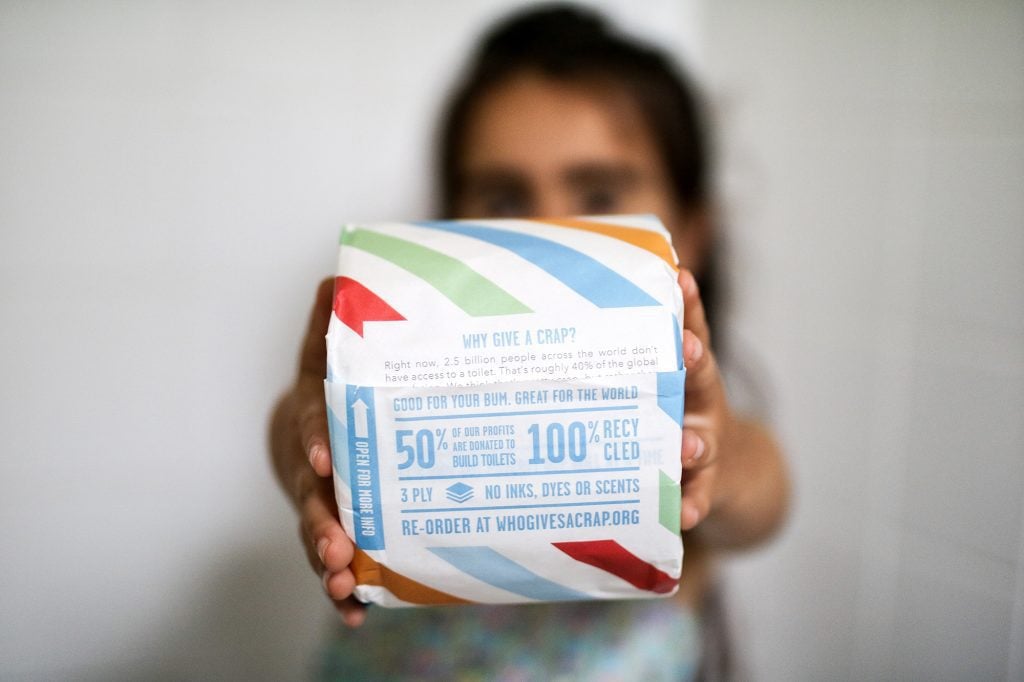 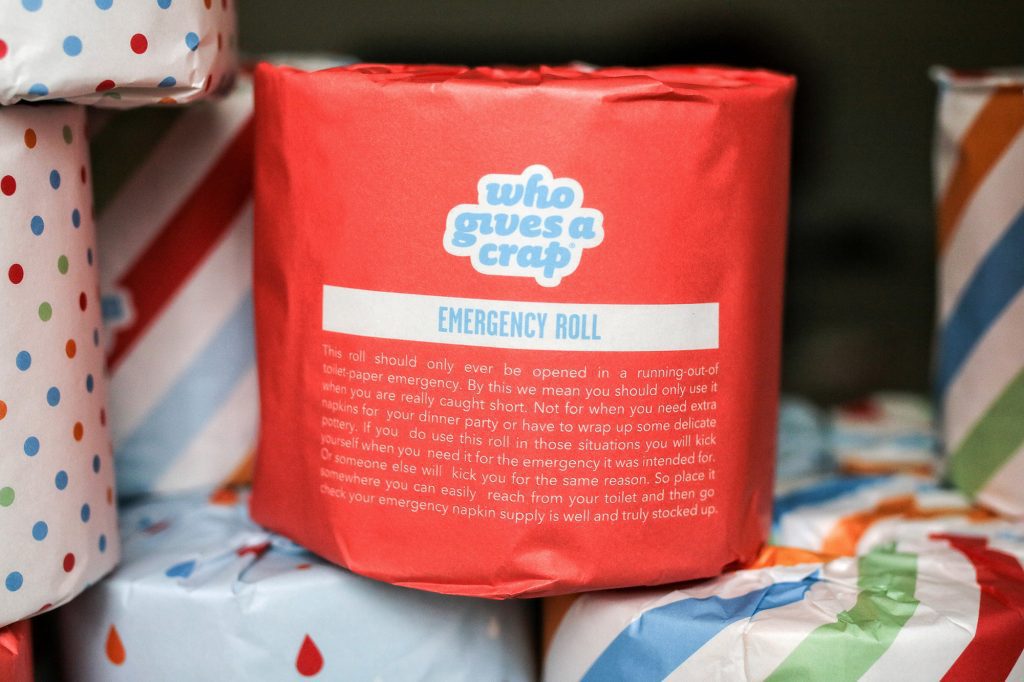 Who Gives A Crap can be purchased online in boxes of 24 or 48.  They offer free shipping on most orders over $30!

With no inks, dyes or scents, it’s safe!

With a money back guarantee, you have nothing to lose (but your loyalty to those pricer store-brands)!

And best of all, have I mentioned their 3-ply is as soft as unicorn kisses and as strong as 1000 ponies?

They even include a couple “Emergency Rolls” that serve as a reminder that you’re running low.  You can tell that they have put so much thought into their brand and their passion really shines through both on their website and in every detail of their packaging. 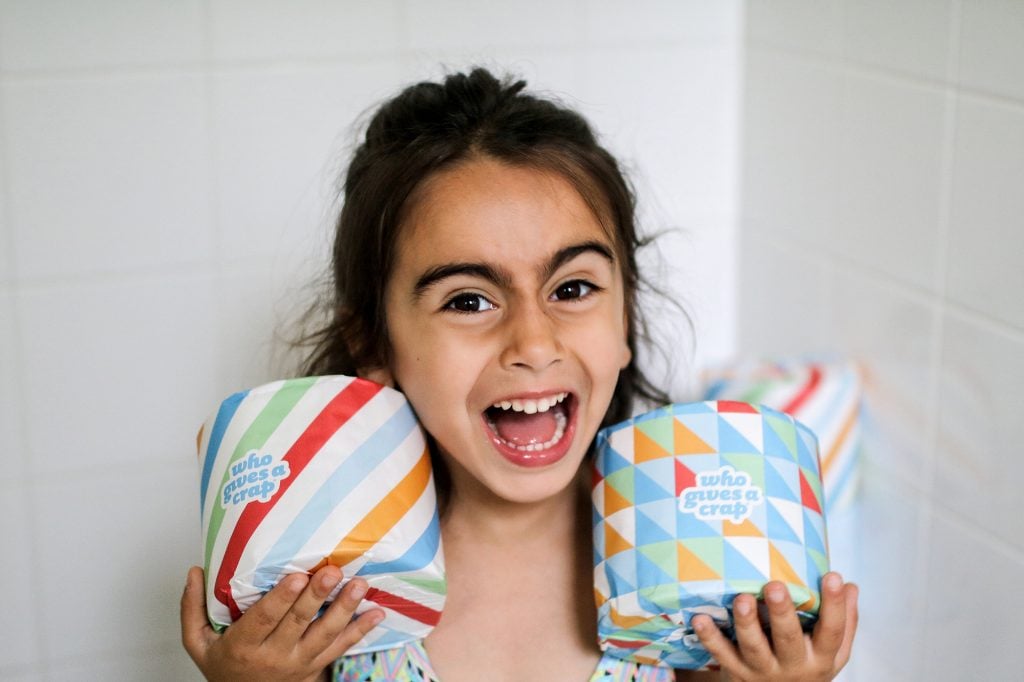 While I never thought I would say this, I actually prefer Who Gives A Crap recycled toilet paper over the more expensive, store-bought brand.  We all have to wipe, so why not wipe for a good cause?  Head over to their site and get $10 off of your first order! In just a few days, you’ll have an awesome box delivered right to your door.

What do you think of Who Gives A Crap? Comment below and let us know!

This post is sponsored by Who Gives a Crap, but all opinions are my own.