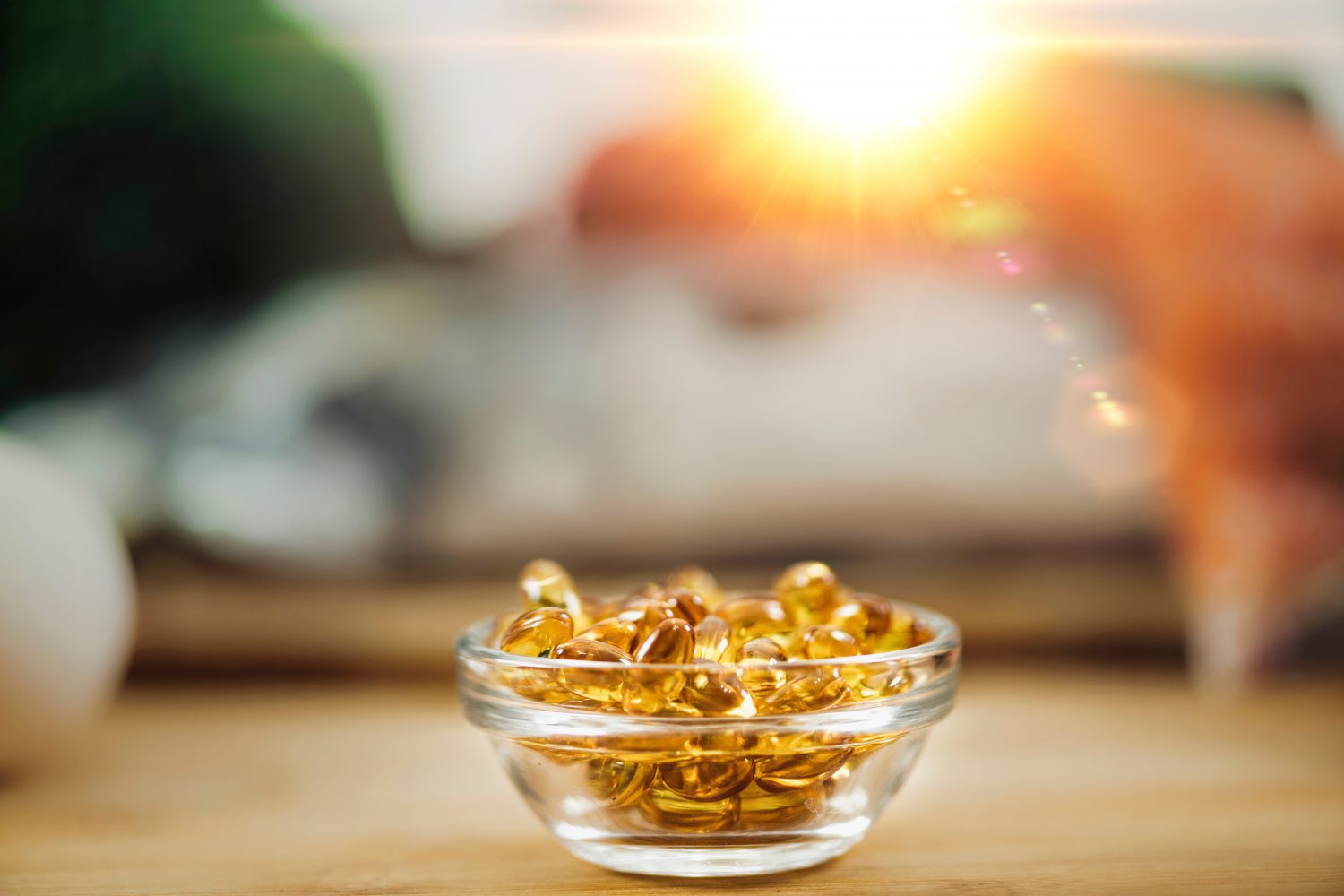 Before we chat about this, please remember that I’m not a medical professional. Please consult your doctor before adding any supplements or medication to your daily regimen.

Let me give you a little background on my story…

I’m pretty sure my anxiety started as early as my senior year of high school, though I didn’t know it may be anxiety until it happened when I was pregnant with my oldest daughter, 15 years ago. I wasn’t officially diagnosed with anxiety/panic disorder until I saw the third psychiatrist in 2018. At that time, I had been working from home for approximately 9 years and spent 90% of my days indoors, in my home. That’ll be important to remember later on in this post.

The more I spoke to doctors, the more I was convinced that my anxiety was either a result of a medical issue (a symptom vs. a condition) OR had to do with a hormone imbalance. My OBGYN brushed it off and didn’t seem to think that it was hormone related at all. But two different general physicians agreed with those theories, though both believed that either diabetes or a thyroid condition was likely the cause of my anxiety symptoms.

My personal experience with physicians hasn’t been the most positive. They tend to form an opinion when they speak to me about my symptoms. They come up with their diagnosis, test for only those things and give me hope that I don’t have to live with this disorder for my entire life. When the tests don’t confirm that their diagnosis was right, they don’t continue looking for the actual problem. They just send me on my way with my negative results in hand and no more answers than I had before I saw them. I believe this has a lot to do with the stigma attached to mental health issues.

It’s all in your head.

The last doctor I saw in 2017, seemed genuinely interested in helping me figure out what was wrong. She sat with me for over an hour and listened and told me she would do everything she could to get me back to my “normal” self. Like the first doctor, she tested for diabetes and thyroid issues. I waited for those test results (though I knew they had previously come back negative).

I waited. I left messages. I called daily. Weeks later, the doctor finally called me back and said that both tests were negative and the only thing that my blood test showed was a vitamin D deficiency, likely because I rarely left the house due to my anxiety and because I had been working from home for 8 years. She told me to pick up some supplements at the local pharmacy and have a nice day.

I was disappointed that this doctor, who seemed to really want to help me, had given up because her initial diagnosis was wrong. And as upset as I was, I took Vitamin D supplements (when I remembered to), though I never went back to see her again. In fact, I haven’t been to a general practitioner since. I just lost hope that I would find one who would actually help and without medical insurance, I was tired of paying out of pocket for nothing.

Fast forward to early November of 2019… one of my friends sent me the following message:

… A friend of mine posted about how she was feeling super anxious and depressed all of sudden starting last year. She always had mild anxiety but it started becoming way worse. She went to a wellness dr and her bloodwork showed low Vitamin D. She also changed her diet to a clean “anti-inflammatory” diet. She said she had never felt more mental clarity. The weird thing is that a couple of years ago my doctor told me to take Vitamin D because mine was borderline low. I did for awhile and then when the bottle was done I never replenished. Lately, like the last 8-12 months I’ve been super stressed and anxious. I haven’t done any research but worth looking into.

I never thought that my Vitamin D deficiency could be connected to my anxiety disorder. The doctor never specifically said that, so I assumed they were unrelated. But when I received that message, I realized that there were at least two other people with the same results and the same issues as me. I couldn’t help but think that this wasn’t a coincidence.

I started reaching out to people that I know, that suffer from anxiety and depression. One after another, most confirmed that they were told that they had a vitamin D deficiency by their doctors too. A total of 11 people that I personally know.  Imagine how many more are out there.

I reached out to a therapist (who also suffers from anxiety) and asked her if she had ever heard of a connection between a vitamin D deficiency and anxiety. Her response shocked me.

I have!! Actually I went to an integrative doctor who tested my blood for deficiencies and I was severely deficient in Vitamin D! I’ve been trying to do more research.

After 12 people confirmed this connection, I decided to put up a poll on Instagram, trying to find more.

I reached out to the people I personally know that selected “no” and they all admitted that they hadn’t been to the doctor for bloodwork in a while, so they actually aren’t sure if they have a deficiency (though a few said they were going to check at their next appointment). It wouldn’t surprise me if many of them come back with results that confirm a vitamin D deficiency. According to The New England Journal of Medicine, an estimated 1 billion people worldwide have vitamin D deficiency or insufficiency.

For now, let’s focus on that 52% that tapped “yes”. 52% of the people that took the poll on my Instagram stories have:

THIS CAN’T BE A COINCIDENCE.

I started researching various articles on the connection between the two. I was shocked to see how many there are. I gathered as much as I could during my online research and here is what stood out:

Vitamin D plays an important role in mood regulation, as well as nerve and brain health.

The body makes vitamin D when our skin is exposed to sunlight. People can get more vitamin D by spending more time in the sun, eating foods rich in vitamin D or taking vitamin D supplements. But if we aren’t exposed to sunlight enough, because anxiety keeps us indoors, we very likely will have a Vitamin D deficiency.

People who live in the colder climate states, tend to report that their anxiety and/or depression is worse in the winter.  This is better known as SAD. Seasonal Affective Disorder is a mood disorder featuring symptoms of depression that occur during the dark times of the year when there is very little sunshine. Several studies have suggested that the symptoms of SAD may be due to a sudden drop in Vitamin D levels, which may affect serotonin levels in the brain.

Did you hear that? Vitamin D is connected to serotonin. The main purpose of SSRI’s (antidepressants) are to increase the levels of serotonin in the brain.

So lack of vitamin D = less serotonin? Less serotonin = depression. Did I understand that correctly?

Vitamin D is also the only vitamin that is a hormone. After it is consumed or absorbed in the skin, vitamin D is transported to the liver and kidneys where it is converted to its active hormone form. Earlier, I spoke about my anxiety possibly being a result of a hormone imbalance… it’s possible that it’s all connected.

What can you do?

I suggest that you get an annual checkup and bloodwork to make sure that your Vitamin D levels are where they need to be. Too much could also be harmful. So again, please consult a physician before adding Vitamin D supplements to your daily regimen. The good news is, fixing a Vitamin D deficiency is simple, easy and can have big benefits for your physical and mental health.

I’m going to be more consistent in taking my Vitamin D supplements daily. I’m scheduling an appointment with a new, local physician to get an updated blood test. I’m going to make more of an effort to feed my body what it needs to function both physically and mentally. Because even though I often find myself without hope that I’ll ever live an anxiety-free live, I am not giving up. And I can’t help but think that if I can just fix this deficiency, I can start to feel better again.