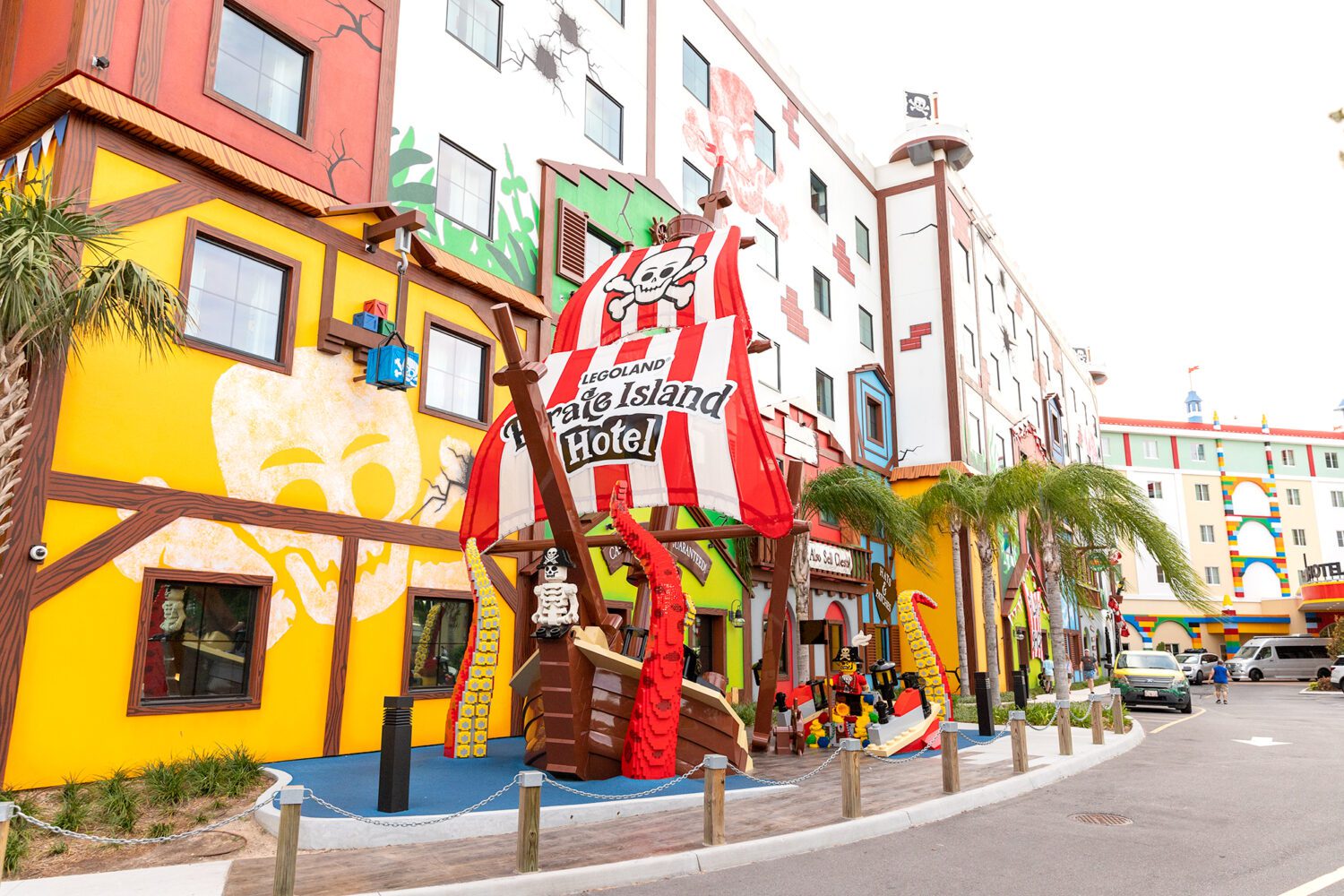 Our last family road trip was to LEGOLAND® Florida Resort in January of 2020. It was our first time visiting the park and staying in the LEGOLAND hotel. On the way home from that trip, we were already discussing a return trip, after the new LEGOLAND Pirate Island Hotel opened later that year.

Unfortunately, the pandemic had other plans and we had to postpone our return. But since Super Dad, myself, and our oldest daughter were vaccinated, we were able to safely return to LEGOLAND just in time for our 12-year-old daughter’s birthday, last week.

There were so many things we loved about the new LEGOLAND® Pirate Island Hotel, that I want to share. Of course, the best part for me was seeing the pure joy in my daughter’s faces, after being home for 14 months. I missed that so much. 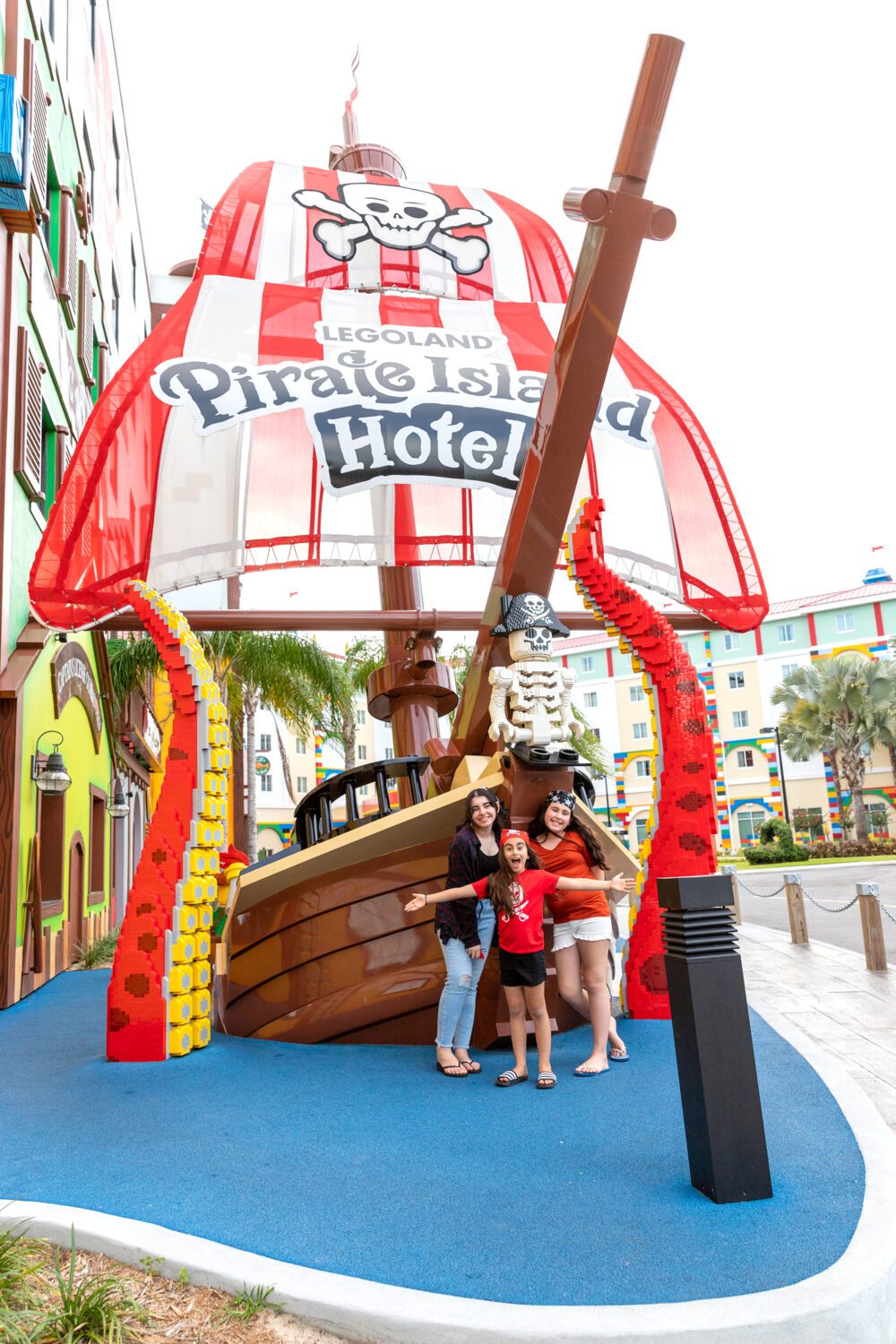 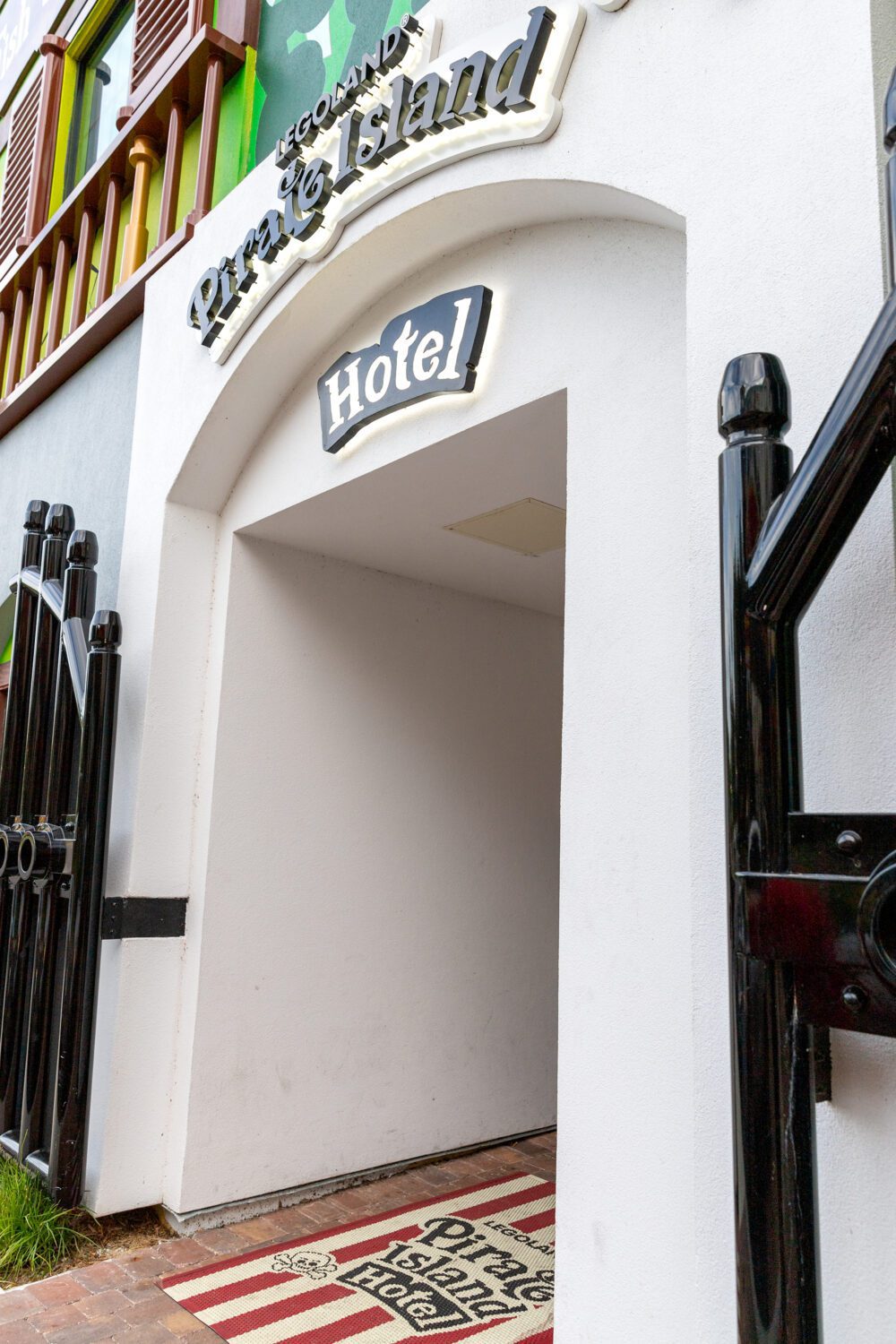 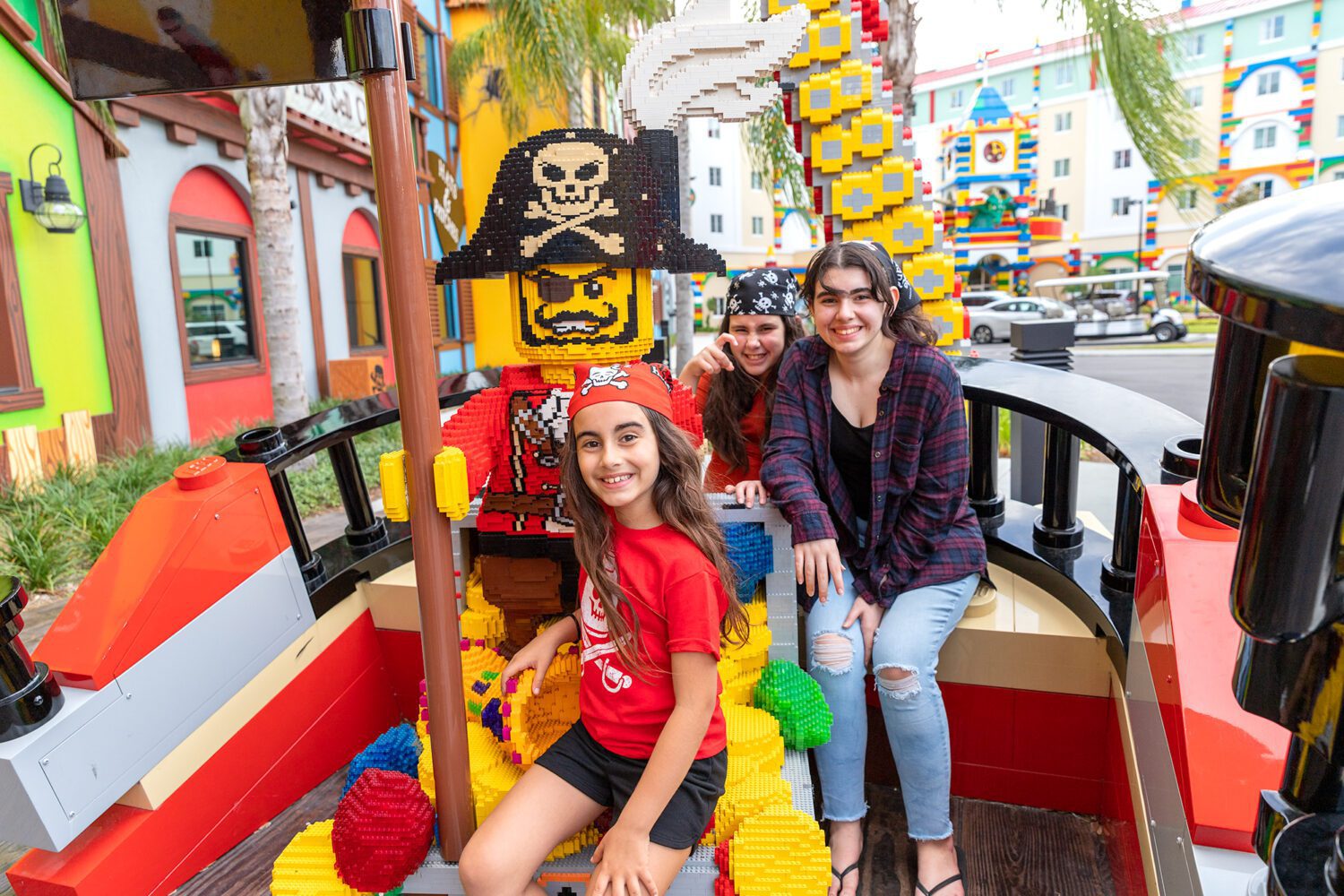 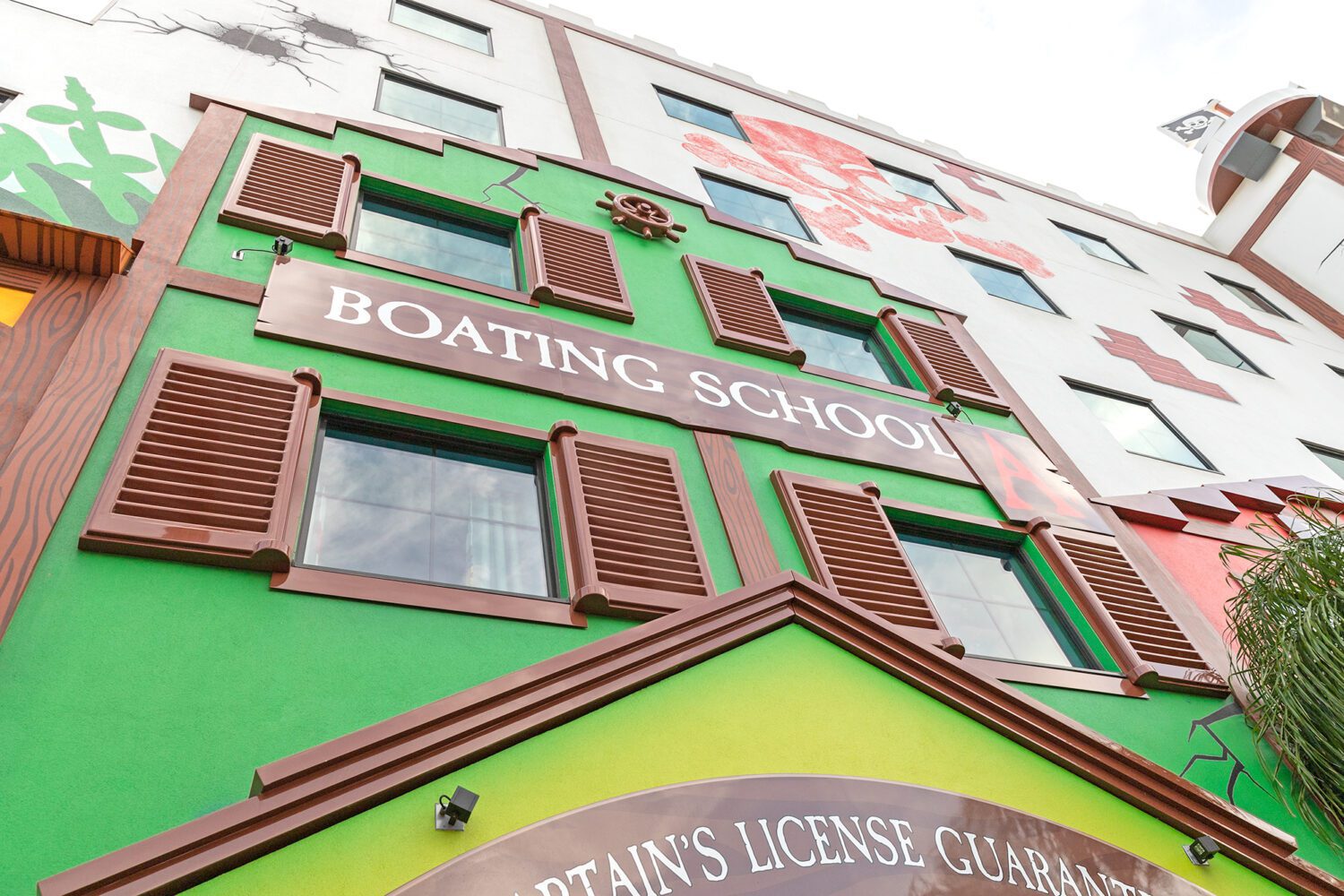 When you pull up to LEGOLAND® Pirate Island Hotel, it’s serious sensory overload. There is so much to see and each time you look, you find something you missed the time before. The designers of this hotel thought of everything.

The first thing you notice when you drive up toward the front of the hotel is the giant LEGO pirate ship. LEGOLAND® Pirate Island Hotel really took the time to turn that into a fun area for kids. It’s a place to sit, build and climb. Plus, it’s an excellent area to take photos with lots of colorful LEGO creations.

The elevators at LEGOLAND® Pirate Island Hotel are an experience in themselves. Much like the original hotel, they feature music but they also feature a pirate voice, which is a fun addition.

Due to the pandemic, elevators are currently a VIP experience (one family per ride). They also encourage you to use the stairs which we did when the elevators took too long. While most of the time we were the only family in the elevator, when the elevators got busy, we shared them as long as everyone had a mask on. 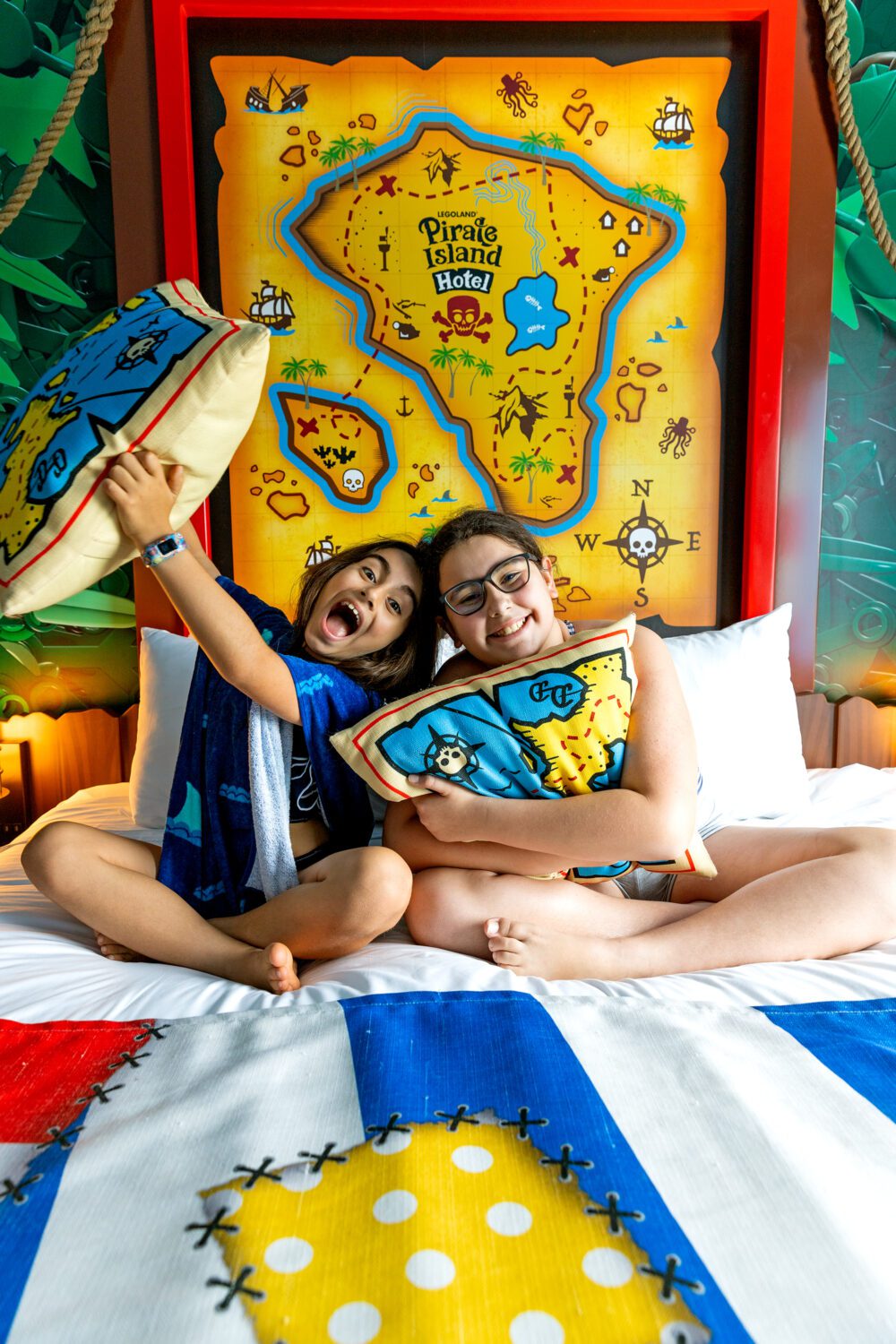 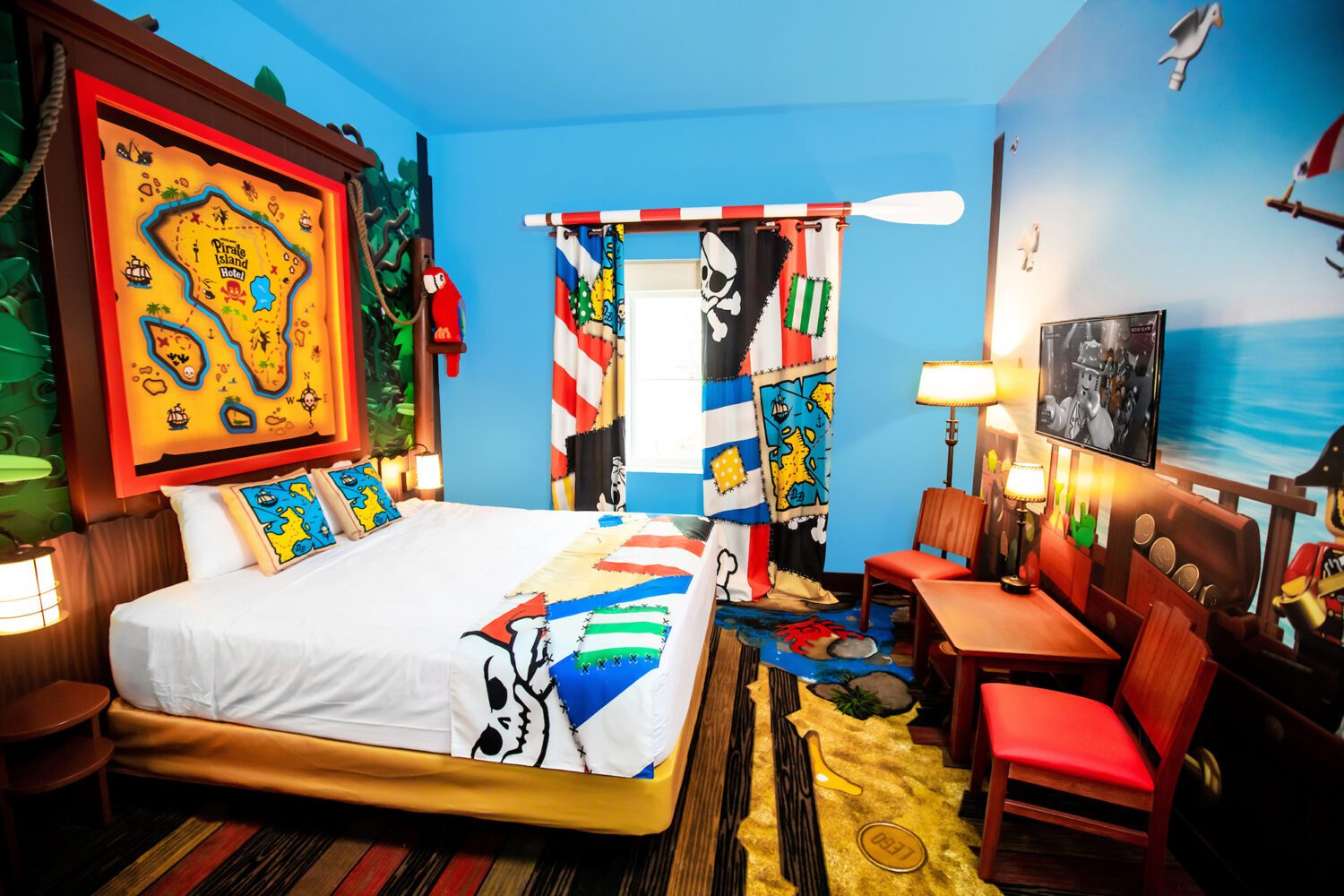 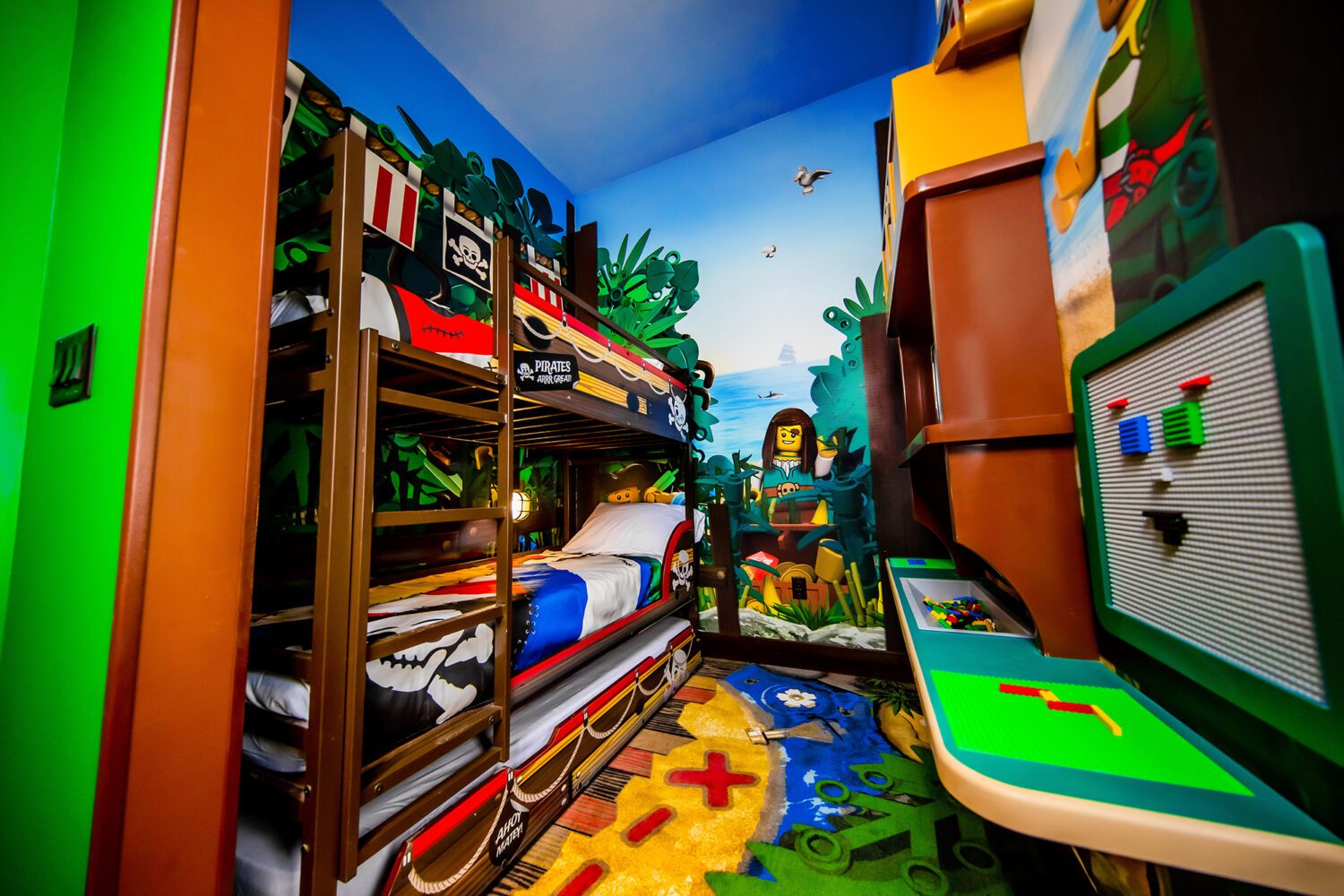 The rooms are laid out in a way that gives the kids and the adults separate spaces, separated by a bathroom. In the kids’ area, you have bunk beds with a trundle bed at the bottom. They have their own TV, with every LEGO movie readily available.

There is a LEGO building area and a small safe where the kids get their room scavenger hunt clues. Once you’ve cracked the code, you’ll find a LEGO surprise inside for each child, which is replenished every day you are there.

The adult space features a king-sized bed, a sitting area, a TV, a refrigerator, and a coffee maker. If you are a techy family like we are, you’ll love that there is no shortage of charging stations and plugs, including USB areas next to the bed. We were able to charge all of our devices at once!

Our room had a lake and pool view which was absolutely beautiful. The beds are so comfortable that we were able to fall asleep almost as soon as we crawled into bed. 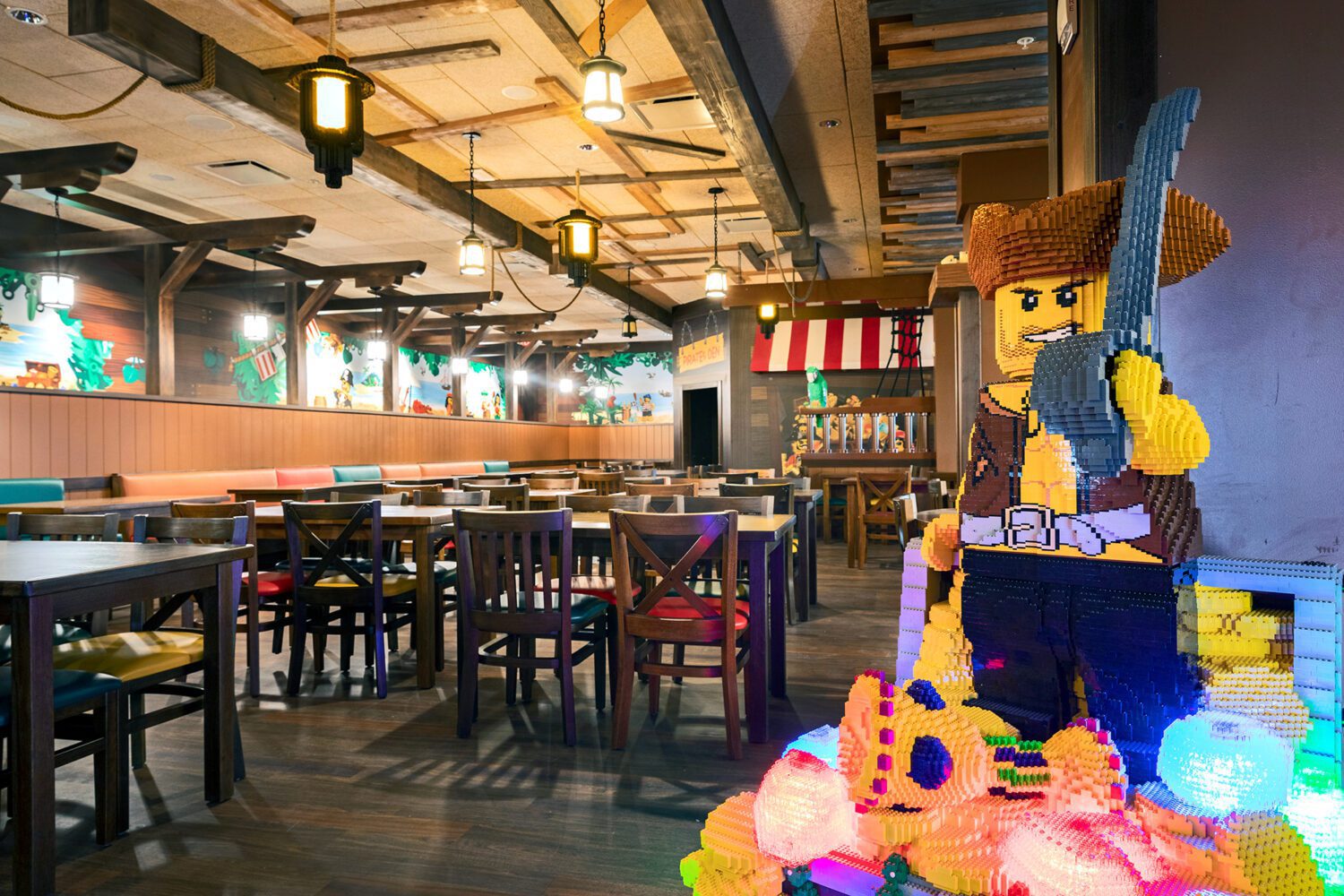 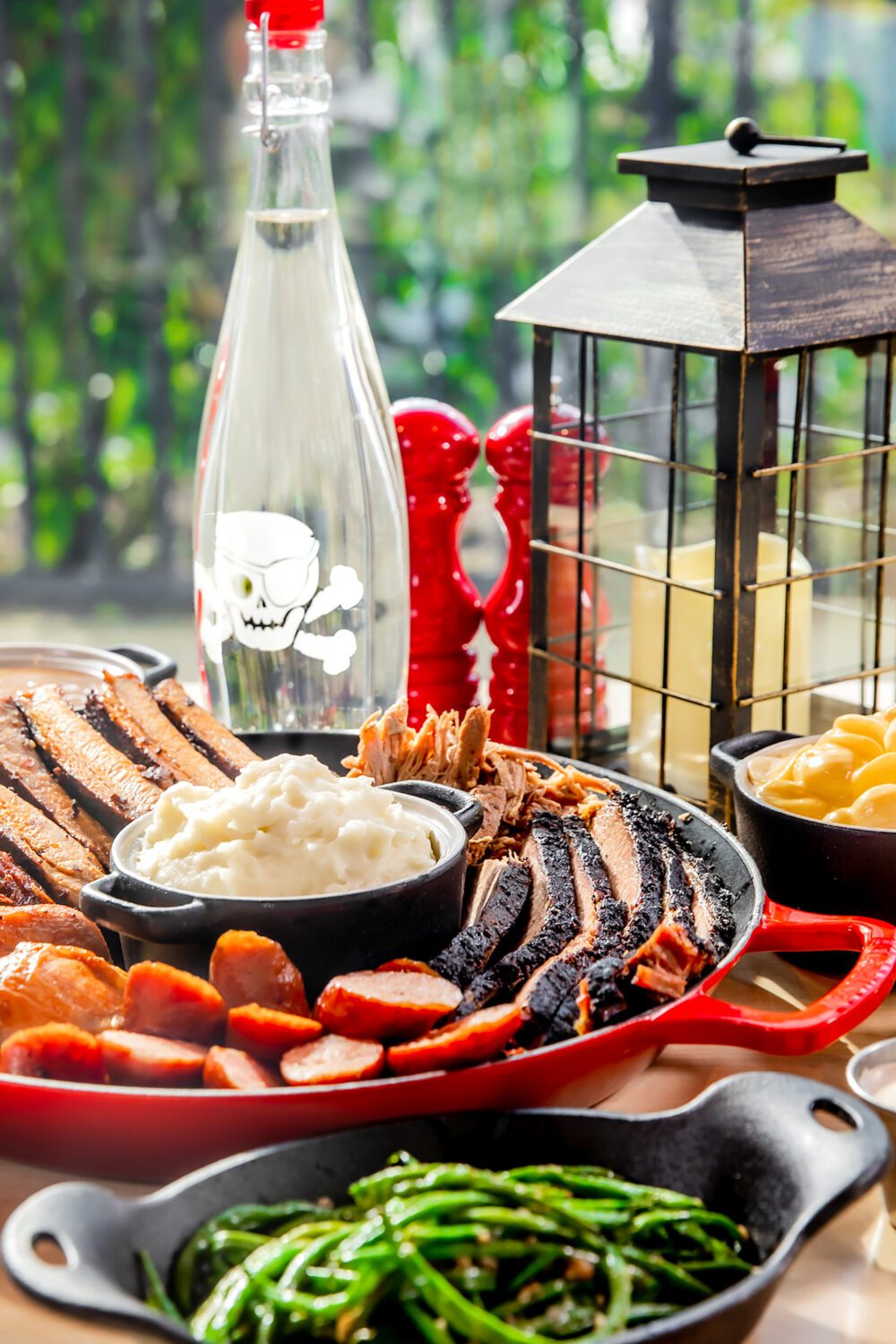 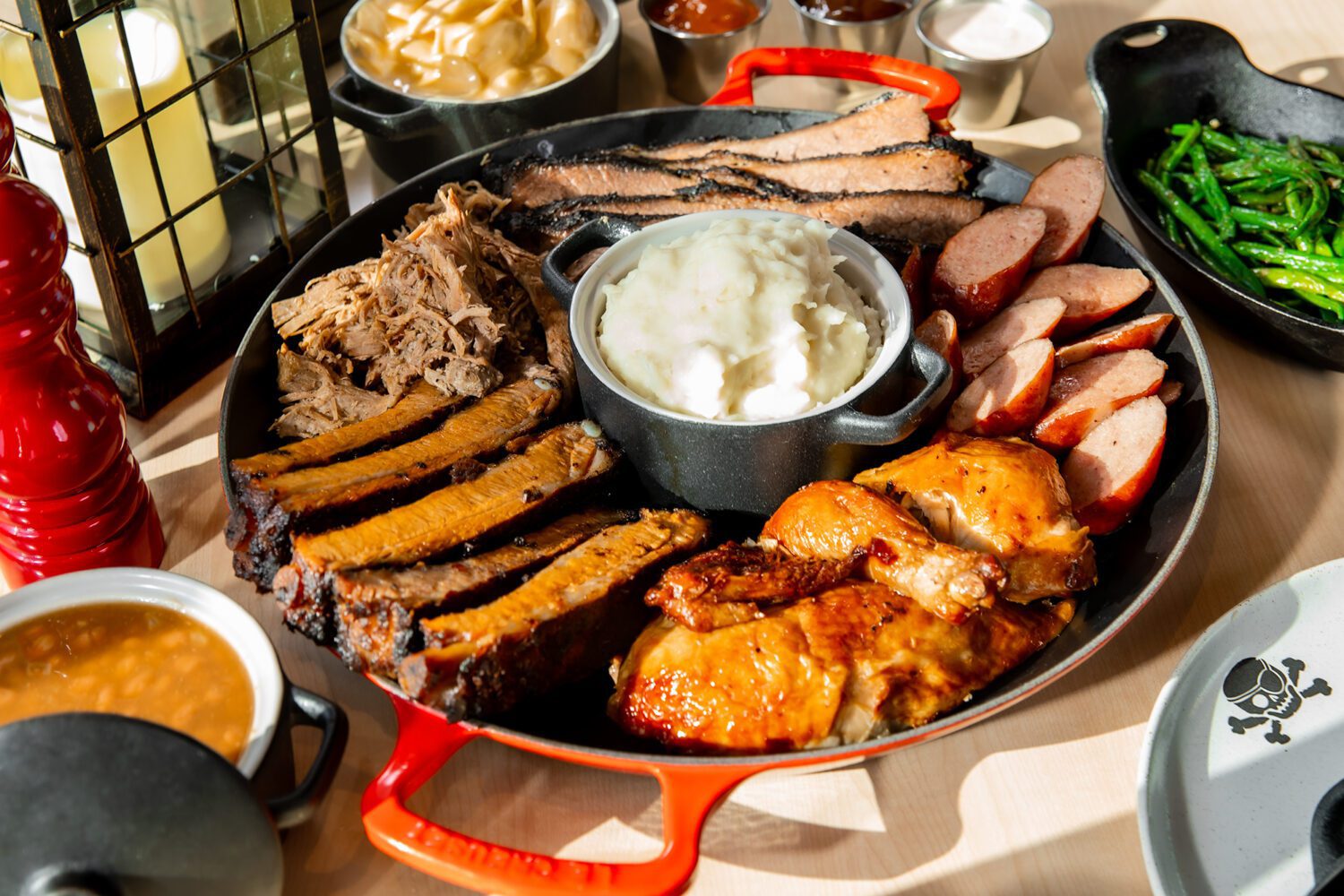 Buckle up because I have a lot to say about the Shipwreck Restaurant which is located on the first floor of the LEGOLAND® Pirate Island Hotel. You’ll want to make reservations before you arrive. The day we booked our trip, we made reservations for both nights.

Shipwreck offers family-style dining, meaning, they bring a bunch of delicious food to your table and you dish it out for your family. Since it’s all you can eat, if you find you are running out of something, you just let your server know and they will bring you some more.

They start you out with salad and bread (also all-you-can-eat). They offer three different options for the main dish. First is the Pirate Platter which features brisket, pulled pork, spare ribs, chicken, smoked sausage, and a side of baked beans.

Next, is the Seadog Skillet which features flank steak, pork tenderloin, blackened fish, shrimp, chicken, and a side of wild rice pilaf. Either of these is served with macaroni and cheese, mashed potatoes, and seasonal veggies.

For dessert, you can have the Pirate’s Captain Delight. It’s a warm chocolate chip cookie with vanilla ice cream, chocolate and caramel sauces, and heath bar pieces. They also have dairy-free chocolate fondue which was served with fresh fruit and plant-based marshmallows.

Every morning, Shipwreck also serves a complimentary family-style, all-you-can-eat breakfast. While we were there, they were not accepting reservations and sat people on a first-come, first-served basis. My recommendation is to get there early and bring your appetite.

Breakfast features pancakes, eggs, bacon, sausage, biscuits, potatoes, fresh fruit, fresh orange juice, coffee, or chocolate milk. They also have individual skillets that you can order. We had the mushroom, spinach, egg, and potato skillet. It was incredible! They also brought over individual packages of Nutella for the girls who were in HEAVEN.

I am still thinking about the food at Shipwreck. It seriously exceeded our expectations. We also loved that they sang to our daughter for her birthday. They made her feel incredibly special (even though there were at least SEVEN other birthdays that same night). 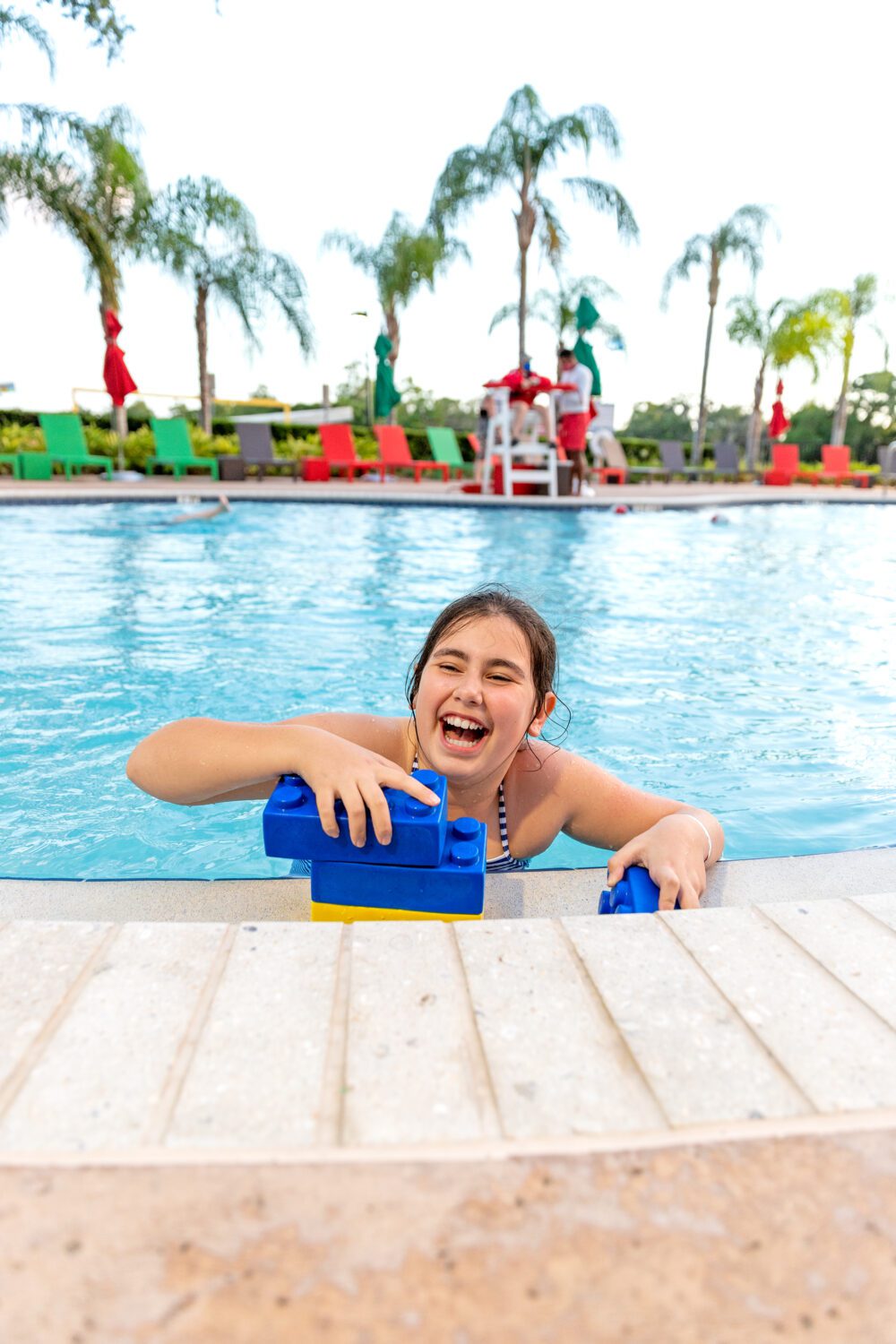 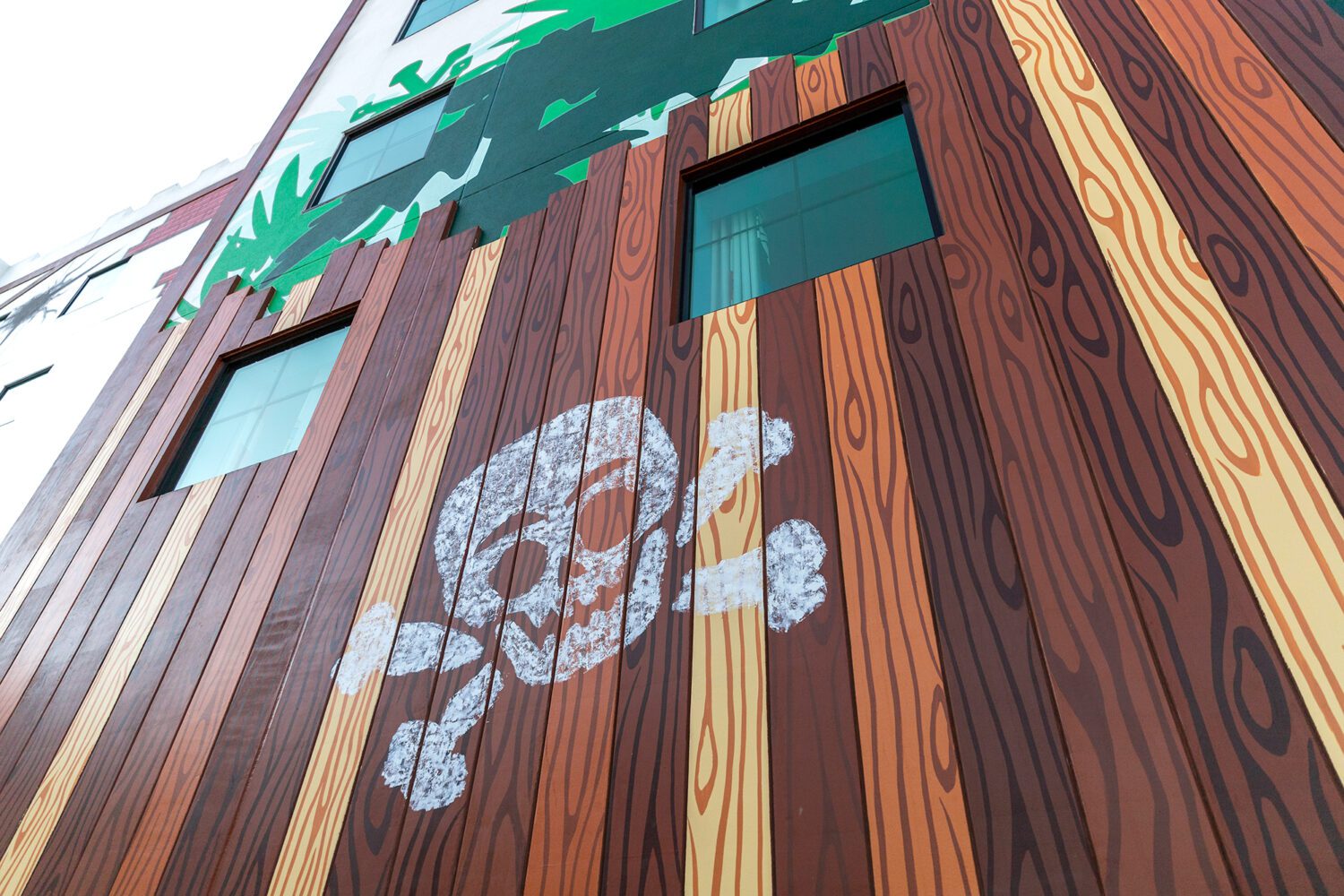 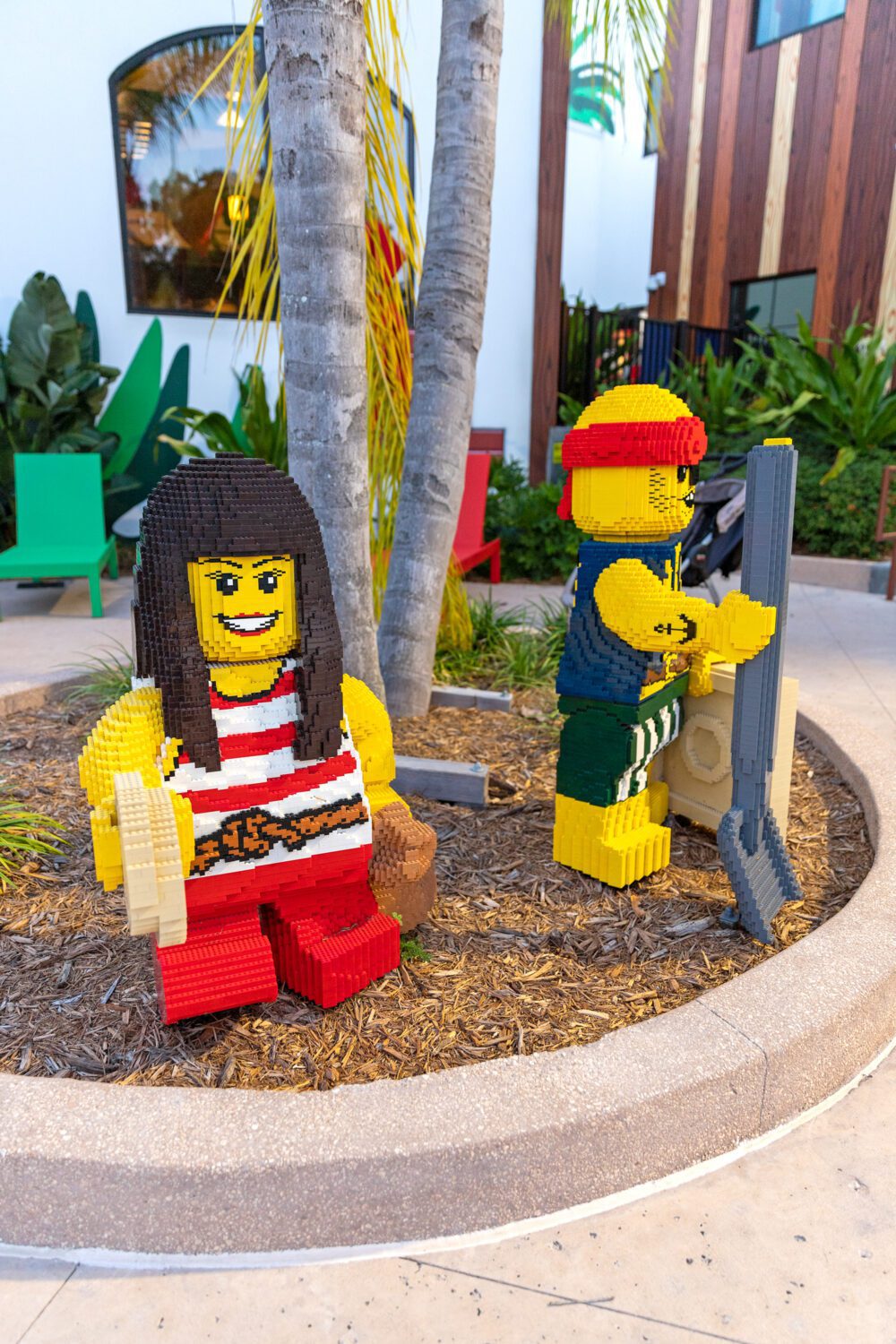 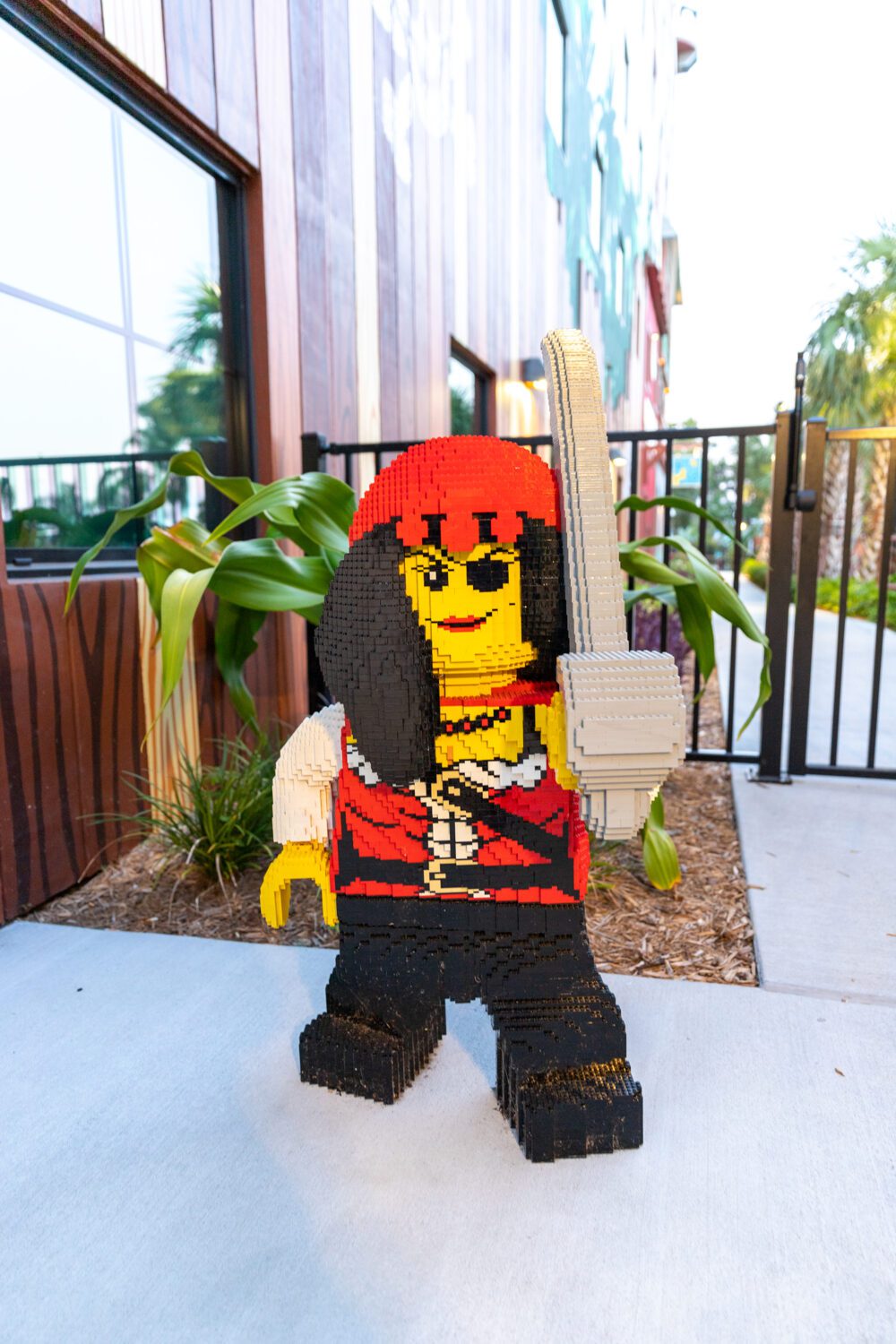 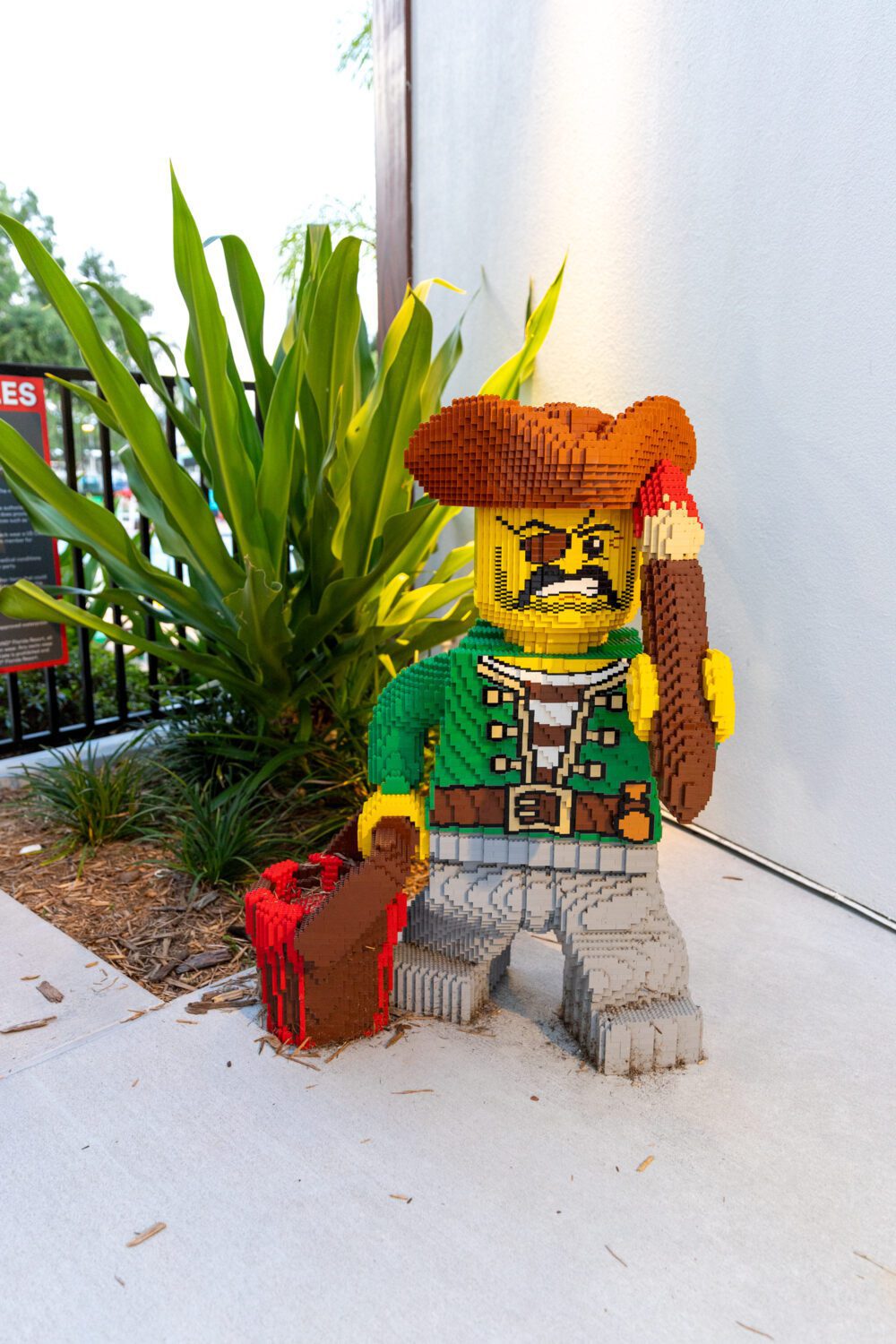 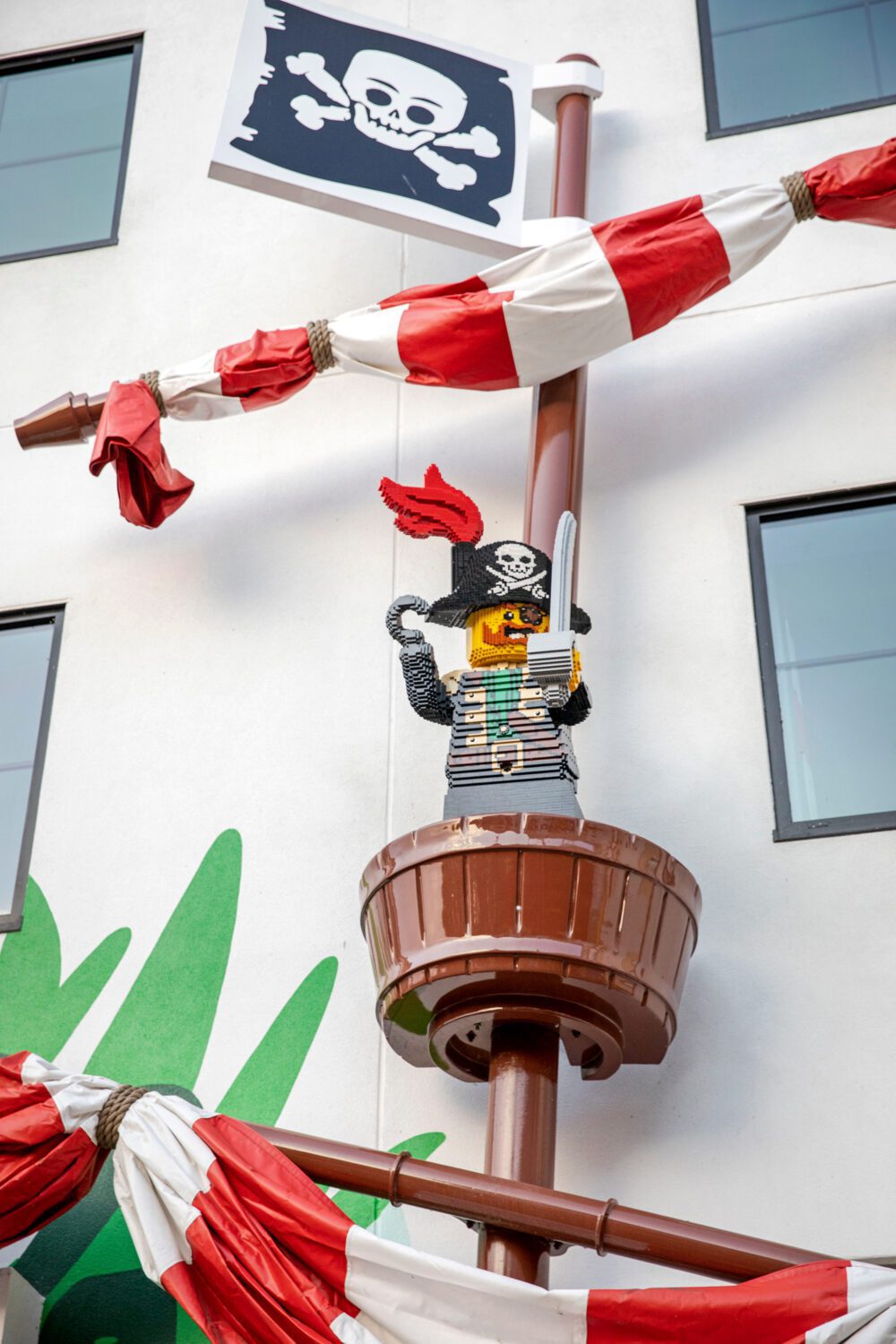 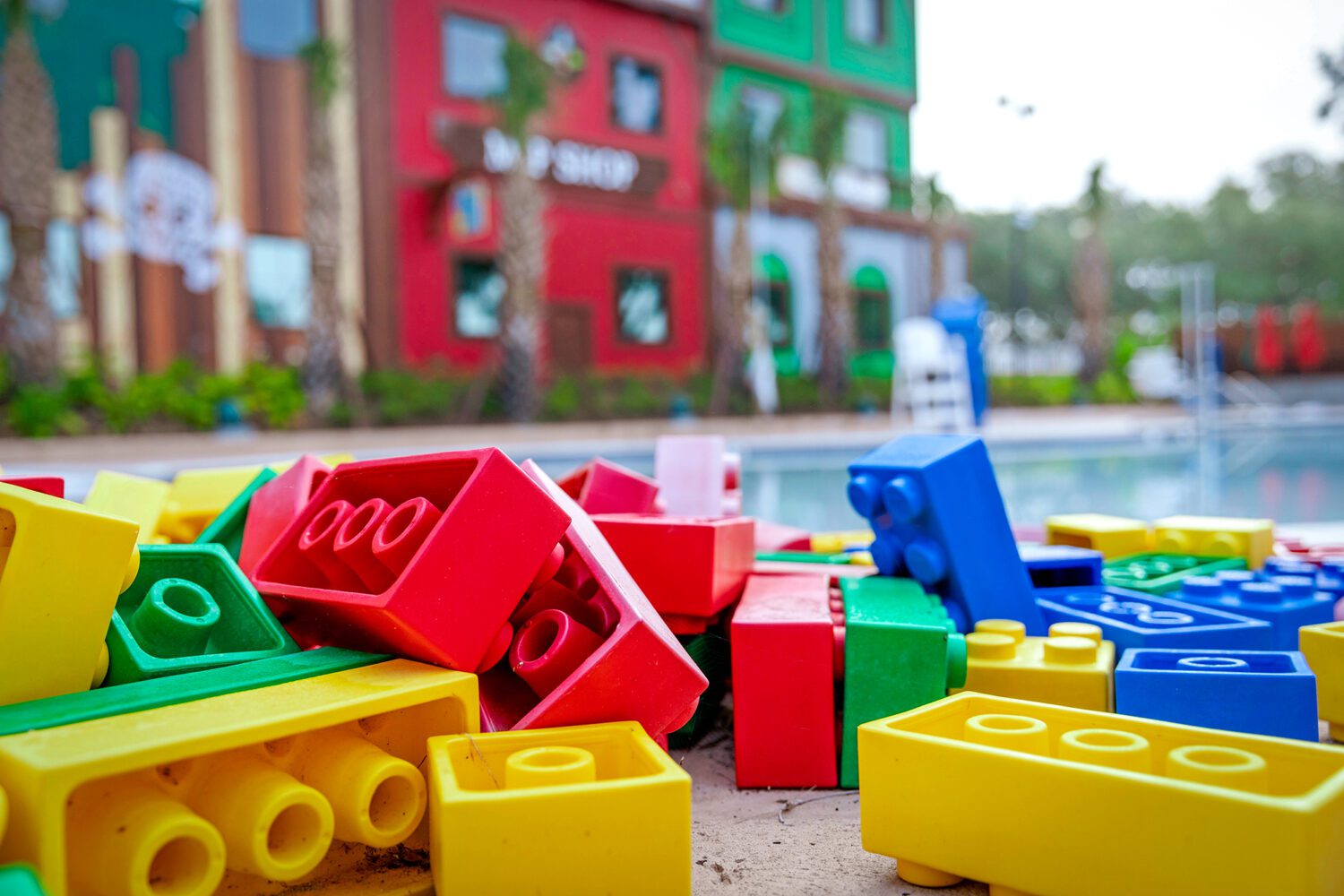 One of the things we didn’t get to enjoy during our first stay at LEGOLAND© Florida Resort, was the pool. We were there in January and the temperatures were so low that they had to close the pool area.

This time, the girls were excited to be able to spend some time at the pool, on the second night.

Much like the rest of the resort, there were lots of LEGO creations to look at. The pool itself is 4FT deep in the deepest parts which are perfect for the kids. They have floating LEGO pieces that you can connect and build with. They supply life jackets and towels as well.

There were two or three lifeguards on duty and probably less than a dozen people in the pool itself. The girls stayed in the pool for about an hour, able to keep their distance from the other kids (which was important to me because they were not yet vaccinated and were unable to wear a mask in the pool).

Now that you have heard about LEGOLAND© Pirate Island Hotel, I’d love to hear if you’ve ever been and if so, what you thought! If you have any questions about our stay, make sure to comment below and I’ll be more than happy to answer them.

Don’t forget to check out all of our LEGOLAND© Florida Resort posts and stay tuned for more about our most recent trip. 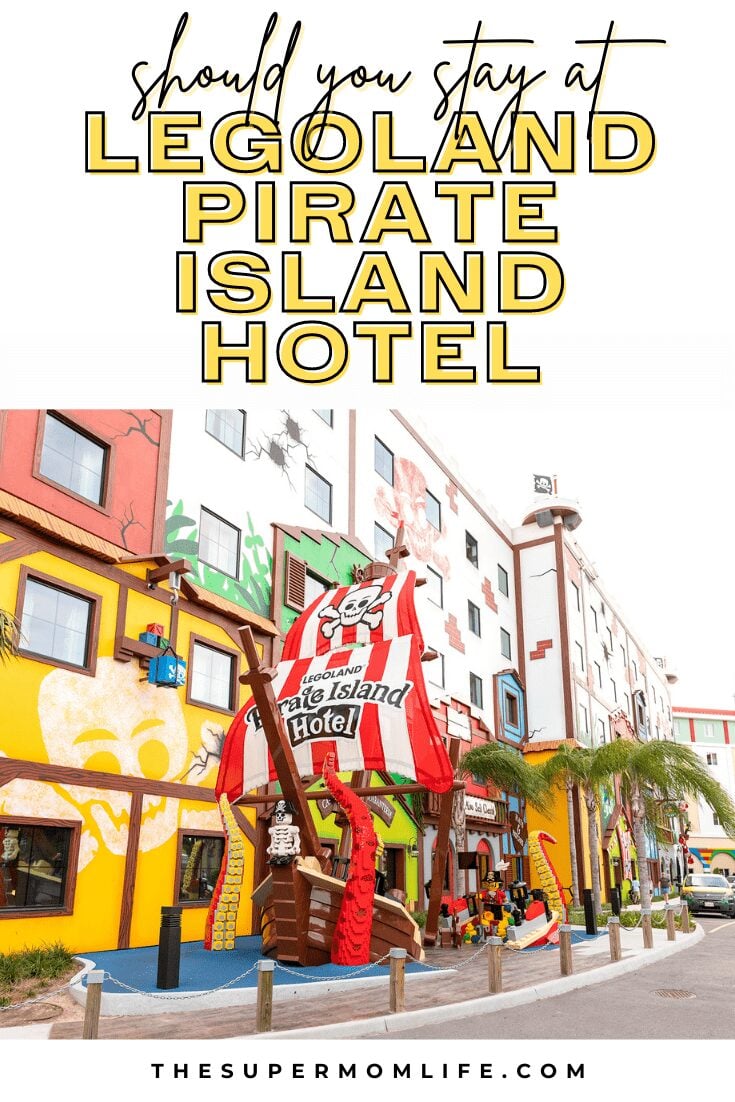 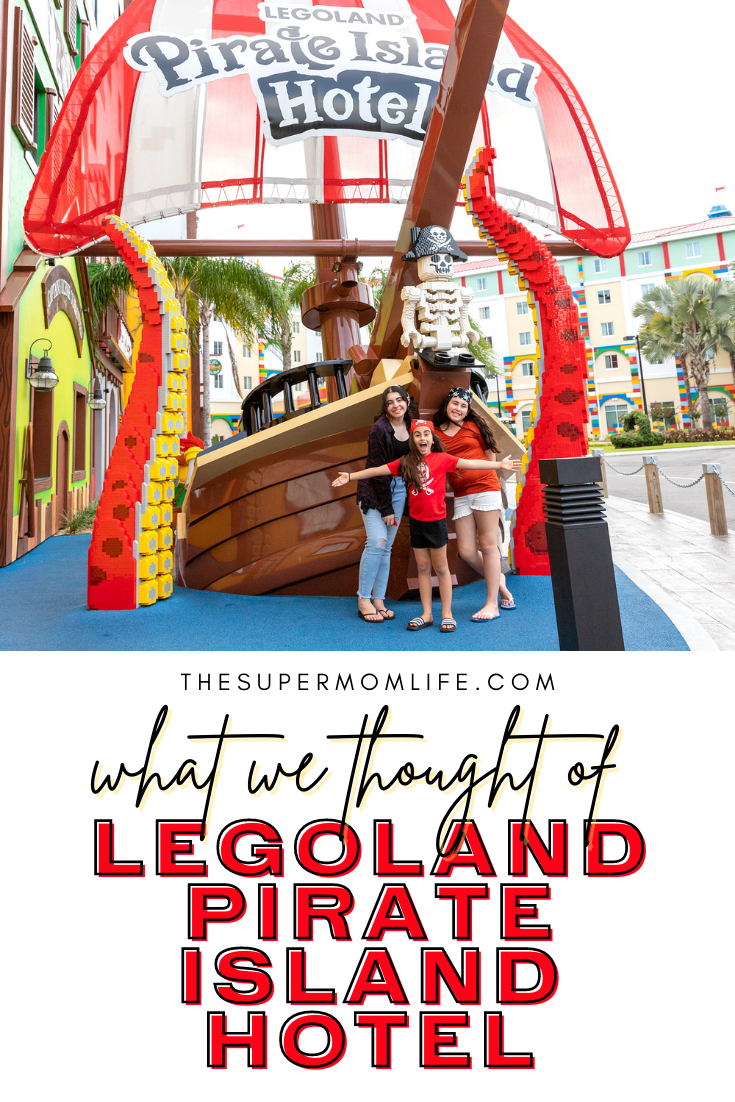