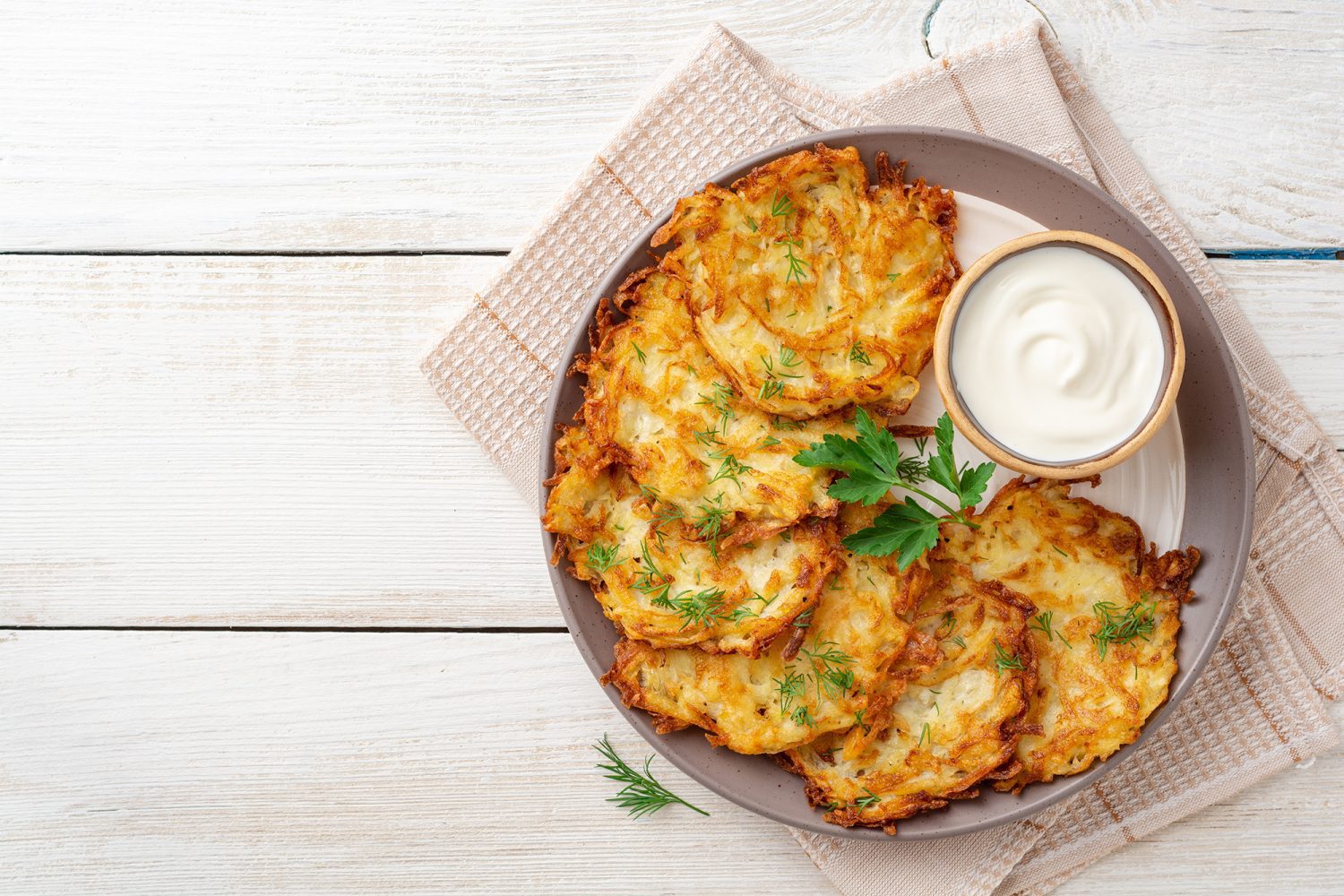 For me, growing up in a Jewish family meant celebrations, pride, traditions, family gatherings and lots of delicious food. I can vividly remember certain dishes and every time I am able to make them for my own children, it feels as though I’m able to pass on the best parts of my childhood to them. At Hanukkah, we often ate potato latkes. Over the years, I’ve made them for my kids, but because of the lack of time, I would buy the boxed potato pancake mix or the frozen potato pancakes. They aren’t bad, but they aren’t homemade either. This year, I finally made them homemade latkes and they are still raving about them.

I should preface this by saying that this potato latkes recipe isn’t a quick recipe. If you have limited time, you may want to save it for another day. You can save a great deal of time if you have a food processor with the shred attachment disc vs. hand grating the potatoes and onions. You will have to stand near the skillet to make sure they don’t burn. You will be flipping and removing and adding new ones at least 4 times, depending on the size of your latkes. So block out some time!

There are people that add chicken fat (also called schmaltz) for extra flavor. I’ve linked an easy recipe. But make sure you allot the time for this if you choose to include it. It does take an hour or so to make, though the flavor is well worth the time. 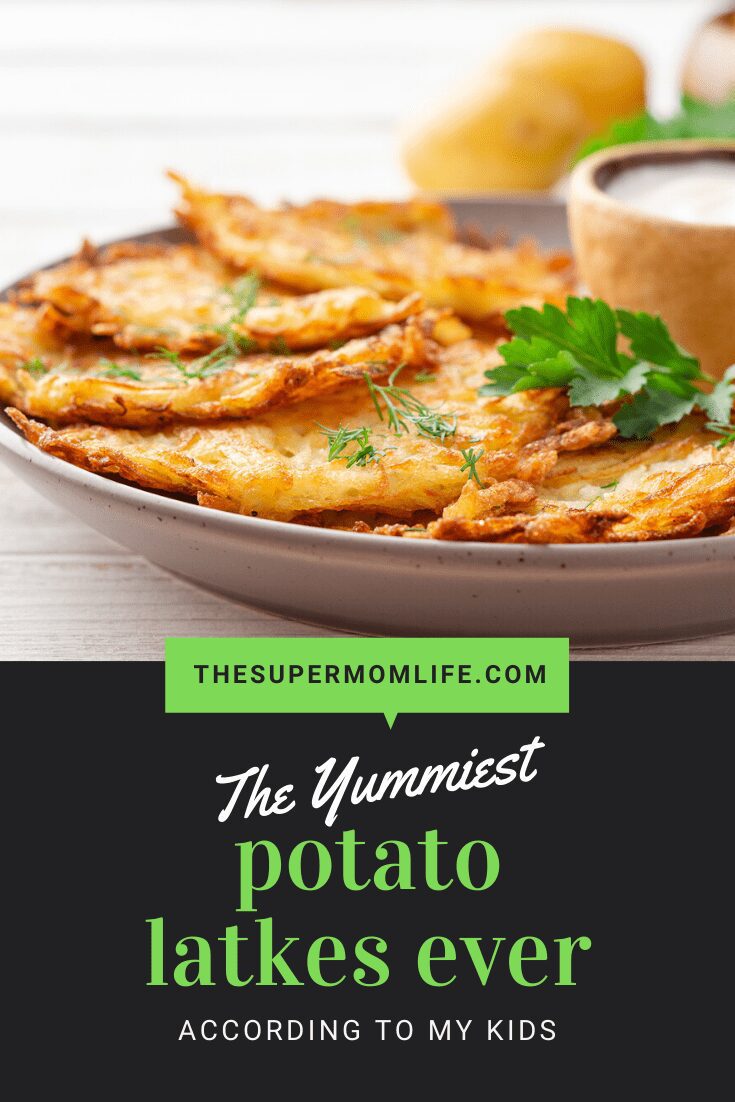 This potato latkes recipe is perfect not only for Hanukkah, but for any day of the year. They are crispy and packed with flavor. 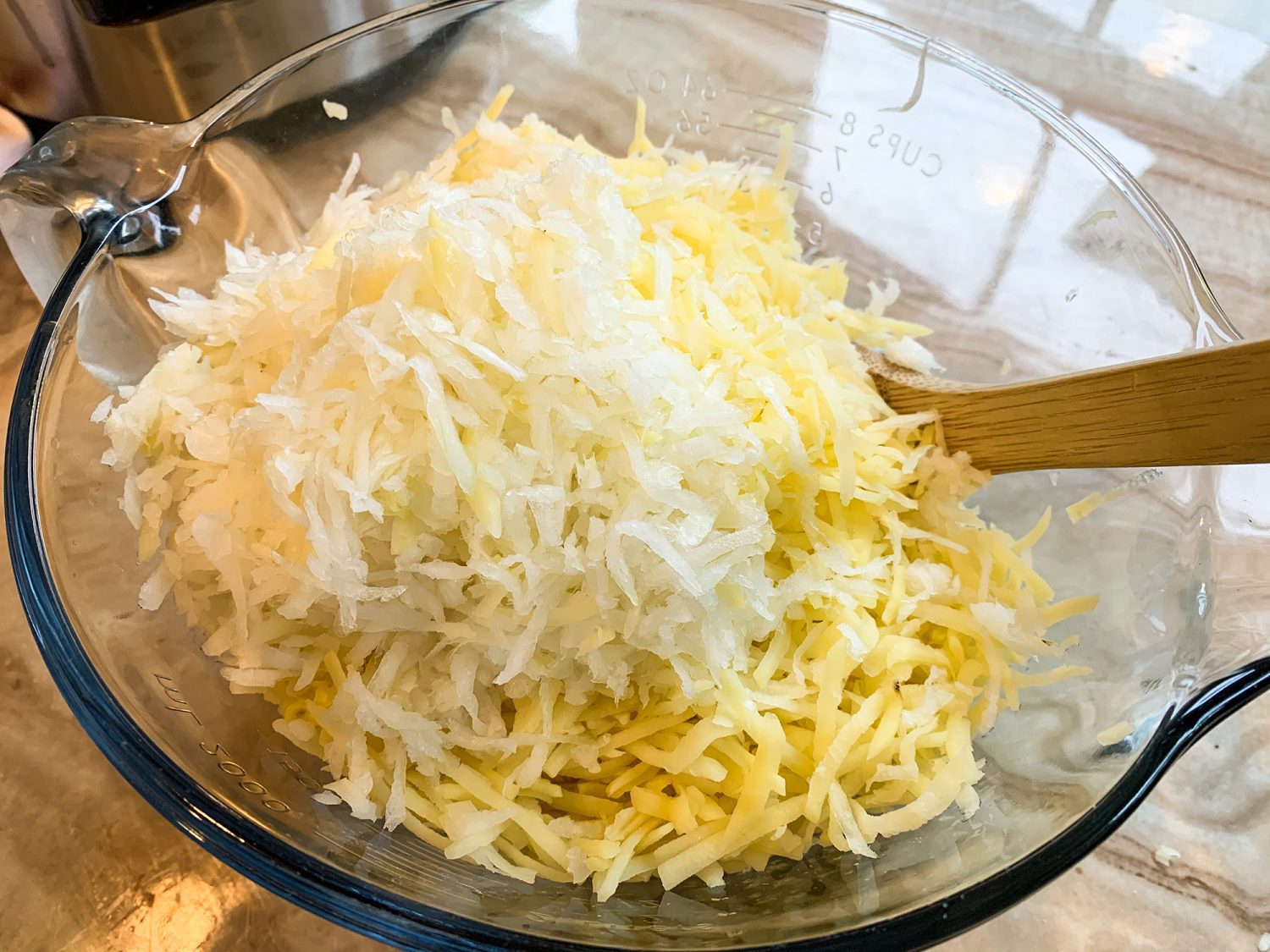 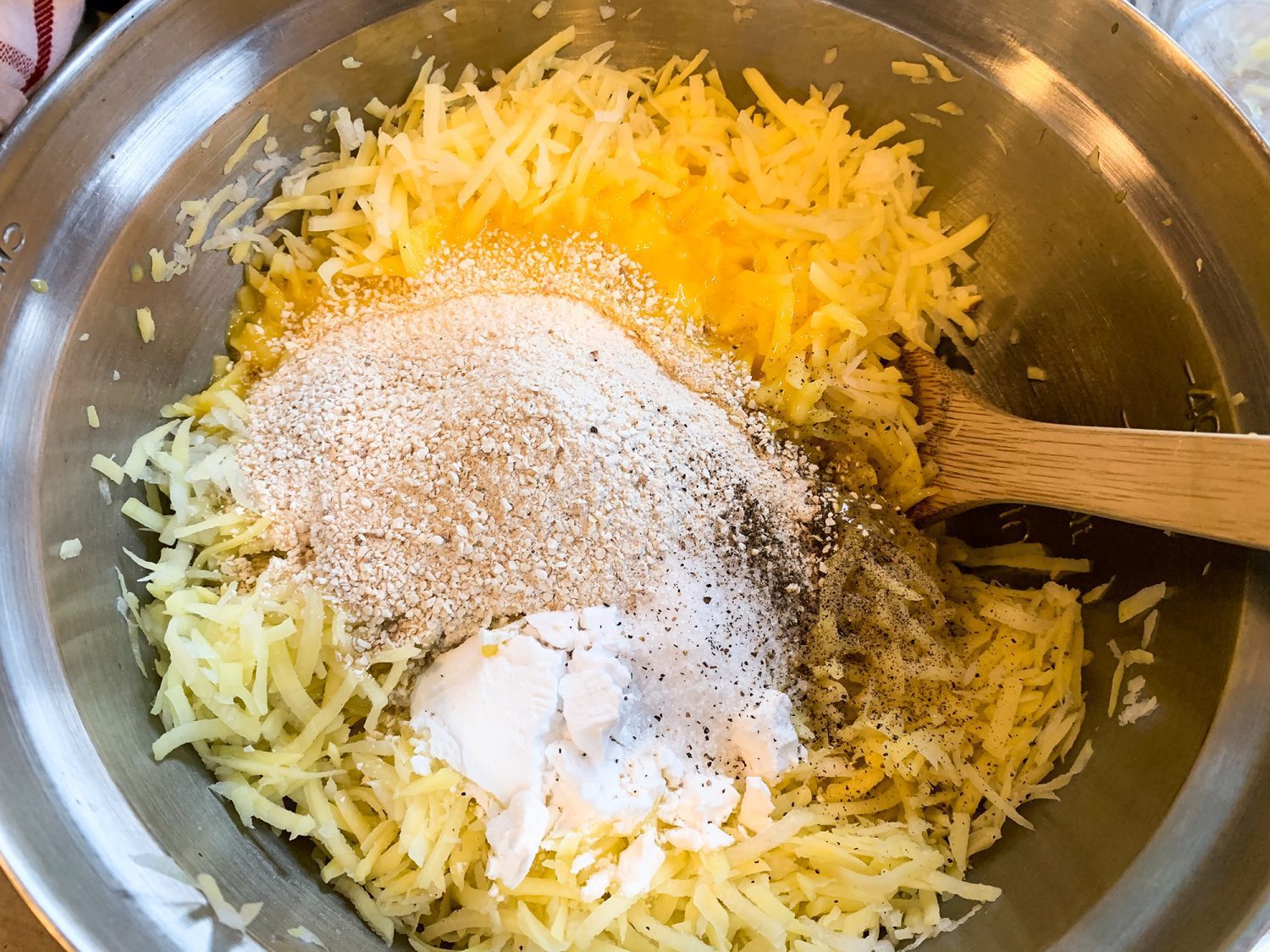 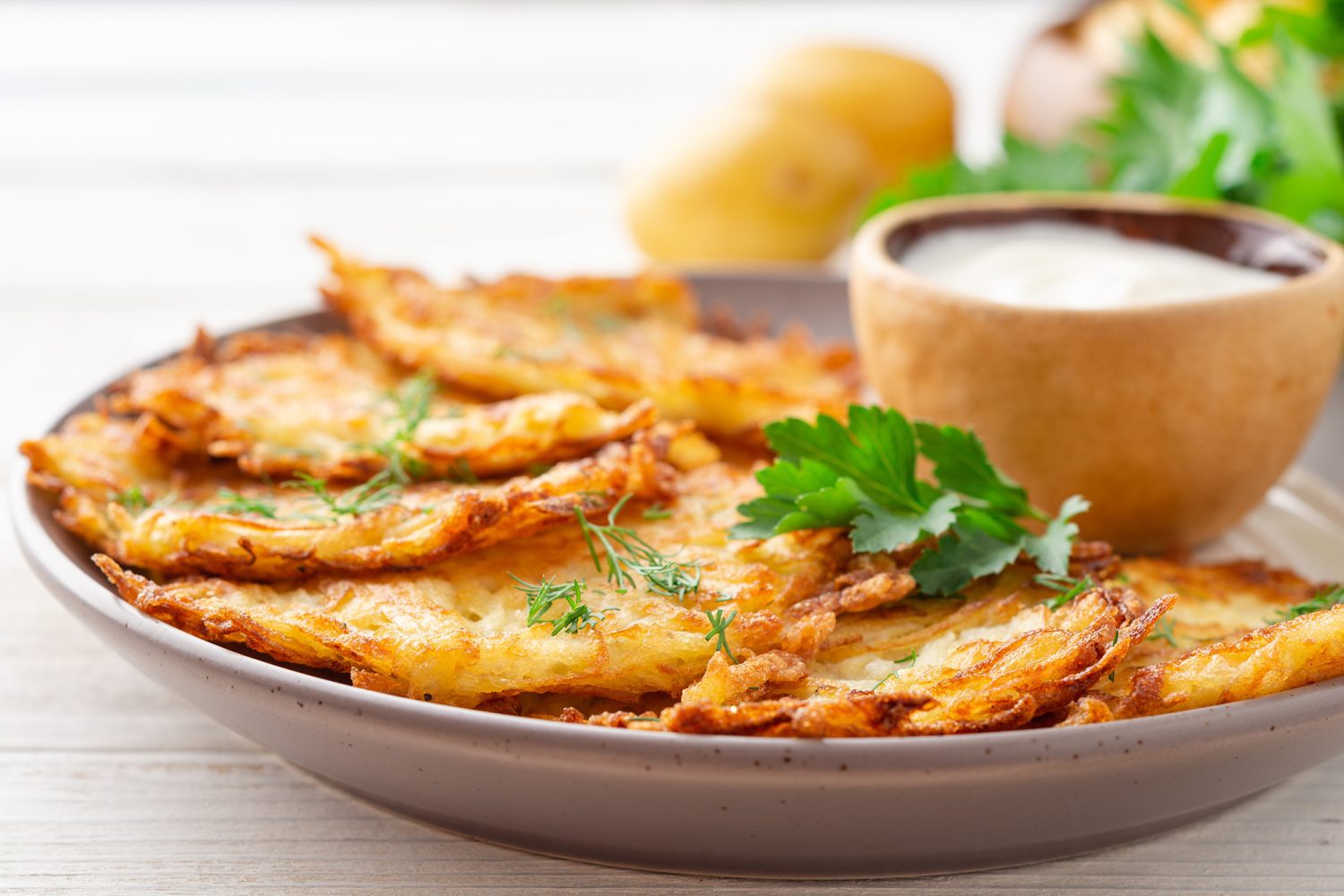 You may find that potato latkes are very similar to the potato kugel recipe I shared earlier this year. The difference is, one is baked as a whole in a baking dish while the other is fried in small portions. If you haven’t had either, they also taste very similar to hash browns.

You can serve potato pancakes with either applesauce or sour cream. If you or anyone you will be serving these to are kosher, you should either leave out the chicken fat or serve without sour cream, as combining the two would make them not kosher.

I was surprised that my kids really loved the potato latkes with applesauce. It’s one of my favorite combinations, but as afraid as they usually are to try new food combinations, I was expecting them to turn me down when I offered it to them. My oldest said the flavors balance each other perfectly. Score!

Due to my crazy holiday schedule, I ran out of daylight and since I’m a natural light photographer, I was unable to shoot photos of the finished latkes, so these stunning images are stock images. Mine look very similar, just not as flat. So when making yours, you can expect them to be a little more on the plump side, unless you flatten them when you fry them. We prefer them plump and hearty on the inside and crispy on the outside.

Have you ever had potato latkes? 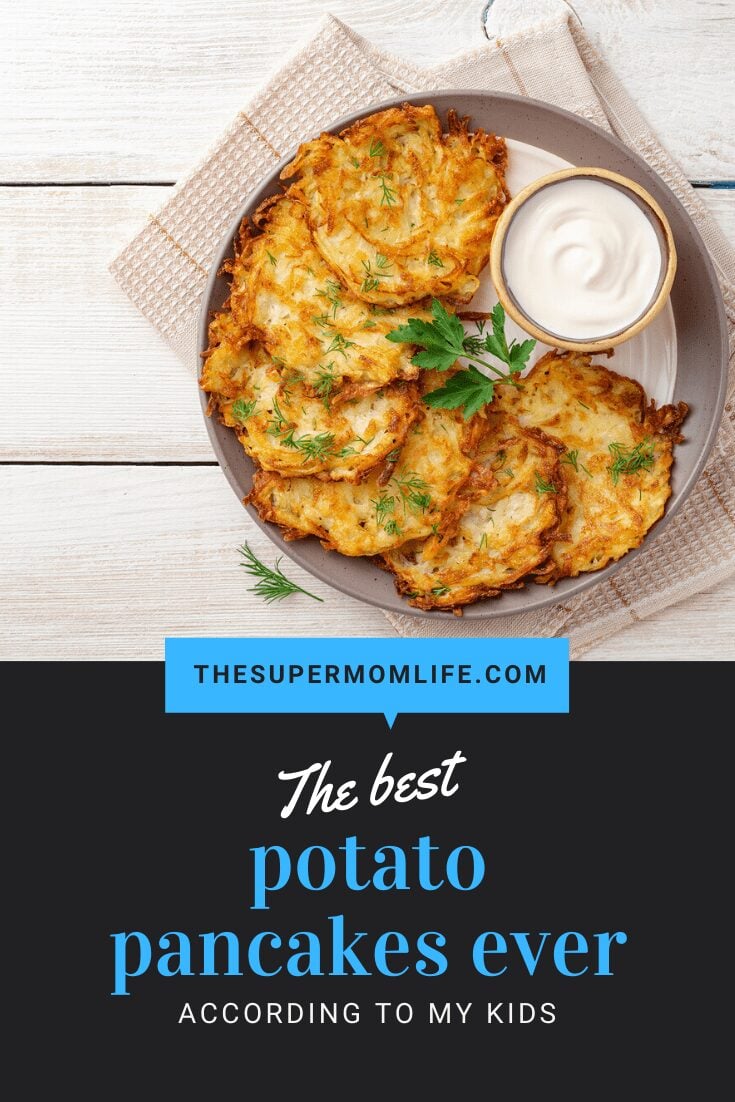