I stopped eating meat in 2017. It was a decision that I made after a couple of nutritionists told me that eliminating meat could help with my anxiety disorder. At the time, it made complete sense to me. Animals have hormones and my hormones were completely out of whack. So why not eliminate those added hormones from my diet and see if that helps. At that point, I was willing to try just about anything. I jumped head first into eating only plant based food and the more time that went by, the more I worried about how I would reintroduce meat into my diet, if I decided to down the line.

A few weeks in, I noticed an undeniable exhaustion kick in. I couldn’t get out of bed and I was having trouble functioning. I added nutritional yeast and vitamin B supplements into my diet, which helped a bit, but I felt like I was missing nutrients that my body needed. After speaking to my doctor, we decided it would be best to add eggs and seafood back into my diet. Things were good, but my anxiety wasn’t lessening at all.

I toyed with the idea of reintroducing meat into my diet for a while. But the more I read and the more I spoke to friends who had made that same transition, I was afraid. Some people got very ill while others had no issues and actually felt better once they started eating meat again.  I am usually the 1 out of 10 people that experience the crazy symptoms, so the idea of eating a piece of chicken and spending the night laying on the floor of the bathroom, sounded like nothing I wanted to have anything to do with. So I put it off.

Last week though, I put my big girl panties on and asked for a bite of Super Dad’s rotisserie chicken at dinner. It was humorous. I tore off the tiniest piece of chicken I could. I held it. I looked at it. I contemplated if I was making the right decision. It took me a full 10 minutes to get this tiny piece of chicken into my mouth and then another few minutes to actually swallow it.

And then I waited.

I’m not sure what I was waiting for. A stomach ache? Nausea? Who knows. I expected my body to revolt against this foreign substance, even though I had consumed it religiously for over 38 years before I decided to abruptly stop one day.

Nothing happened. Absolutely nothing. It took me a minute to get out of my own head about it and remind myself that I wasn’t ingesting something illegal or foreign, but once that was done, I was perfectly ok. One bite mission complete.

The following night at dinner, I ate a bigger piece of chicken and experienced the same non-existent side effects.

Every bit of research I did, said the same thing… start slowly and start with chicken. Once you are sure your system is ok with chicken, move to turkey. Do the same with pork and eventually beef. Getting your body used to it gradually will be easier on your system. As of today, I’ve successfully eaten chicken three times with no side effects. This week, I’ll try turkey.

While eating meat isn’t for everyone, I have decided that reintroducing it is best for my health. Should you decide to reitroduce meat into your diet as well, here are some helpful tips I picked up along the way.

So tell me… do you eat meat? If not, do you think you’ll ever reintroduce meat into your diet?

Also, make sure you check out this recipe for the best vegetarian chili ever. Even meat eaters love it! 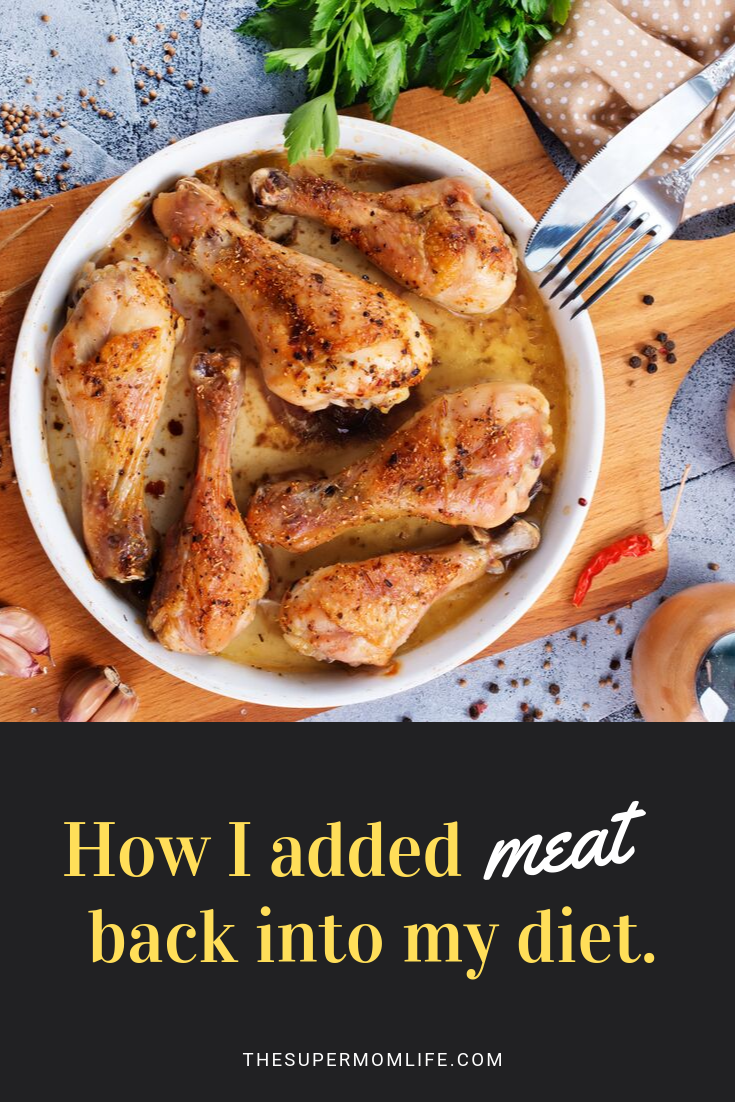 I Will Never Be That Girl

Halloween Trick or Treat Cupcakes Filled with Slime and Sprinkles

Remembering My Childhood with Vicks VapoRub

What to do for Migraine Relief

Why It’s Important to Educate Our Daughters on Heavy Periods

iYURA, a Premium All-Natural Selfcare Brand from The Ayurveda Experience

A simple and fun Valentine’s Day idea for your kids! Just add a lollipop (or a few) and it will be a hit with all of their friends!