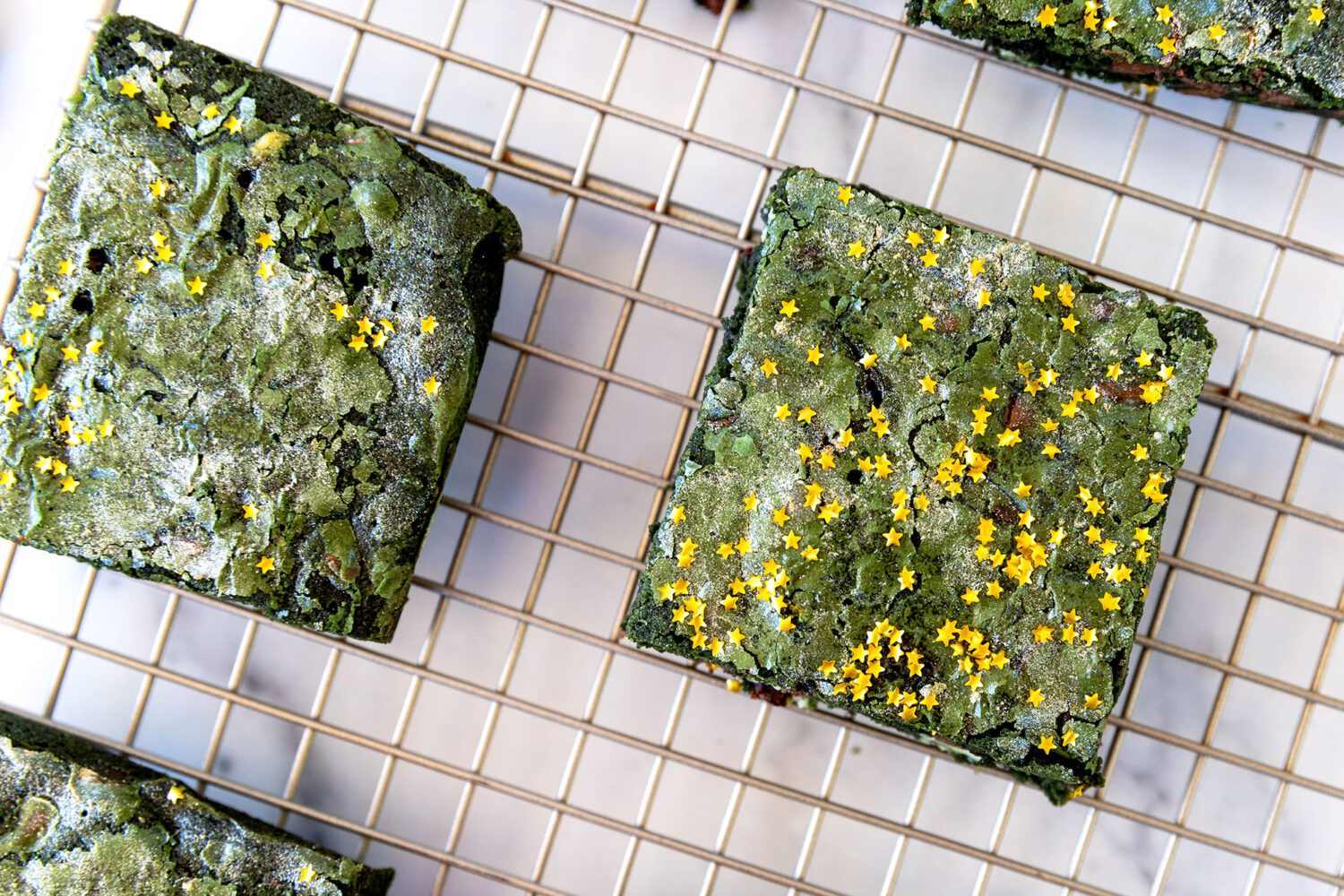 This recipe post almost didn’t happen. But despite some negative feedback on the appearance, I decided that I had to share this recipe. Why? Well, because my family loves them so much, they finish them within minutes of them exiting the oven every single time. While they may not look appetizing to some, I can tell you that if you close your eyes and take a bite, these St. Patrick’s Day brownies are one of the best brownies you’ll ever taste.

It all started one day when I had the bright idea to make green velvet brownies for St. Paddy’s Day. I pulled up one of our new favorite recipes — Red Velvet Cheesecake Brownies from Broma Bakery and was just going to swap out the red food coloring for green.

I took my two youngest to the grocery store to pick up a couple of things and while down the baking aisle, I started looking at the different chocolate chips. I asked my 12-year-old if she would prefer a cheesecake brownie or something mint for St. Patrick’s Day. It was a tough call but ultimately, she went with mint. So I grabbed mint fudge baking chips, milk chocolate chips, and green food coloring, excited to make a variation of one of our favorites. 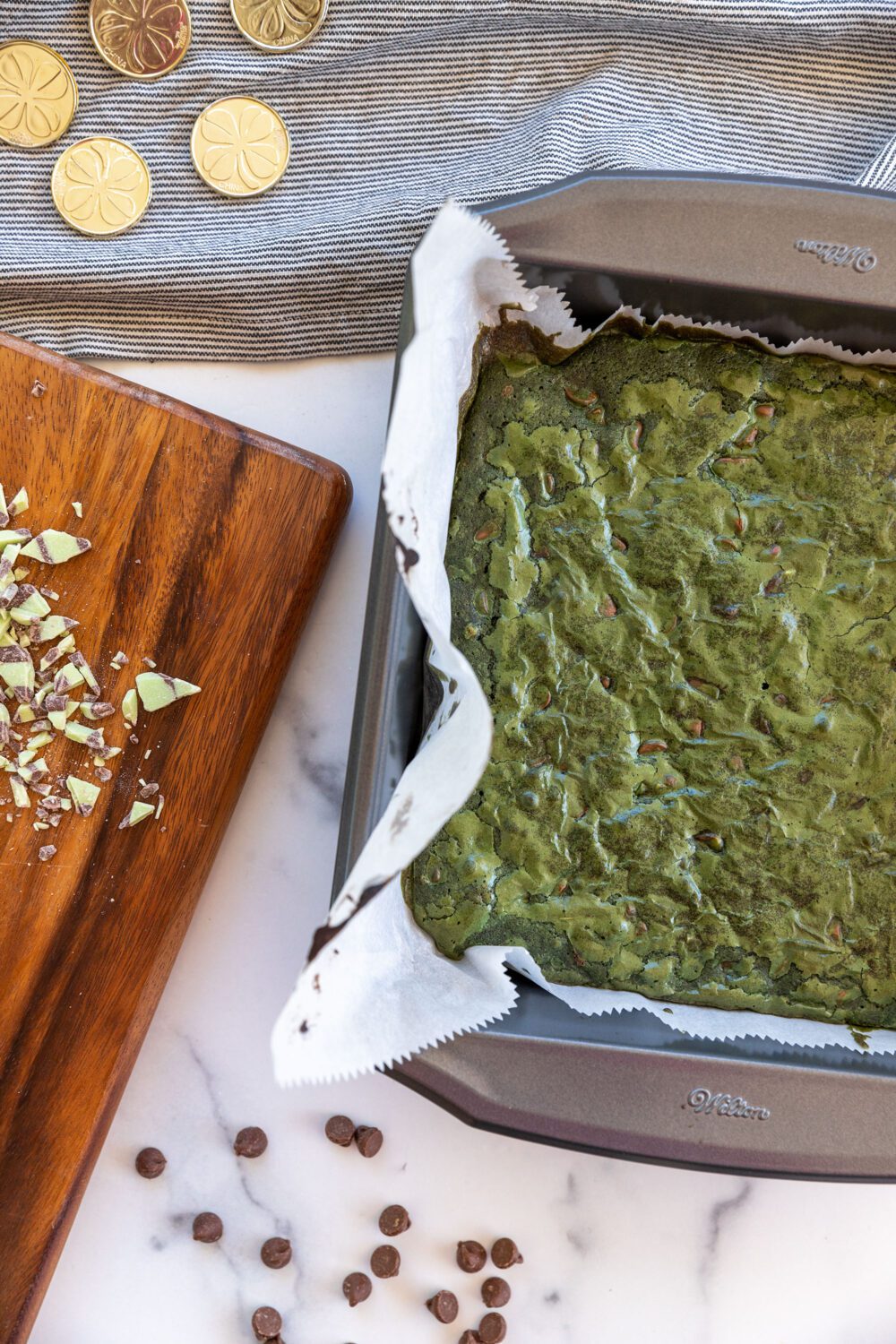 I went home, made the recipe and my family loved it. They were moist and chewy on the inside and contained the perfect amount of mint and chocolate. I was excited about this recipe, so I took a picture and sent it to my cousin (who is like a little sister to me).

Her reply was “EW, Heather. They look like that stuff that grows on trees.”

She then googled “algae on trees and sent me a screenshot.”  And while it definitely hurt my feelings a bit, she wasn’t wrong. They totally looked like it. Google it. You’ll see.

So I took to Instagram and asked my story watchers if they thought my St. Patrick’s Day brownies resembled algae. 92% agreed with my cousin. But 78% said they would still eat them, even if they looked like algae. So either, I have very hungry followers or very kind ones (maybe both).

I put up another poll in my Instagram stories, asking if I should just leave them brown and maybe add some green sprinkles or sanding sugar. Many were suggesting icing, but I knew that any of those would change the flavor of these St. Patrick’s Day brownies and they were perfect just as they were.

One of those kind followers, who happens to also be named Heather, suggested that I add some gold luster dust or gold sugar sprinkles to help take away from the algae appearance.  So naturally, I jumped in my car and picked some up, and rushed back home to try again. 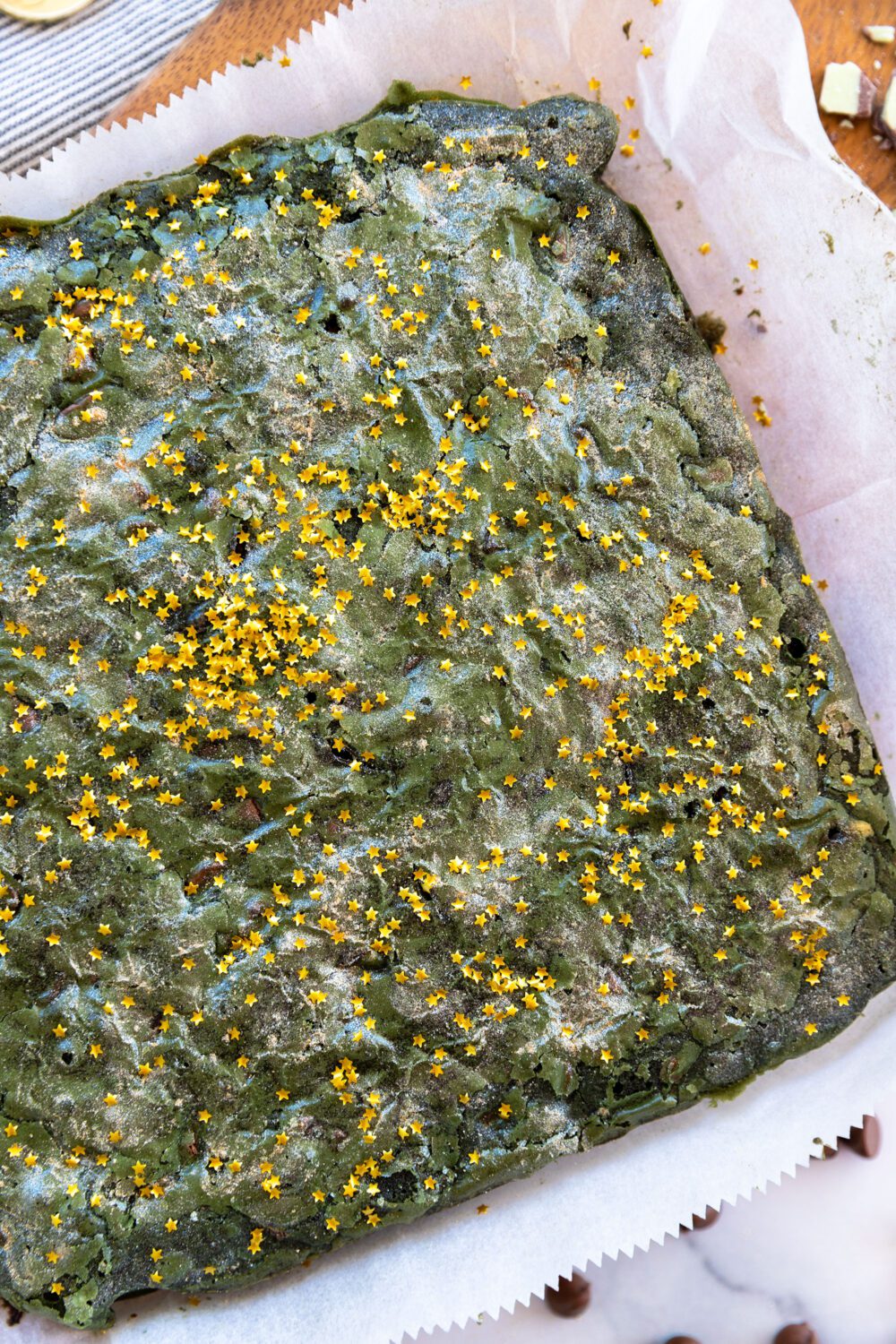 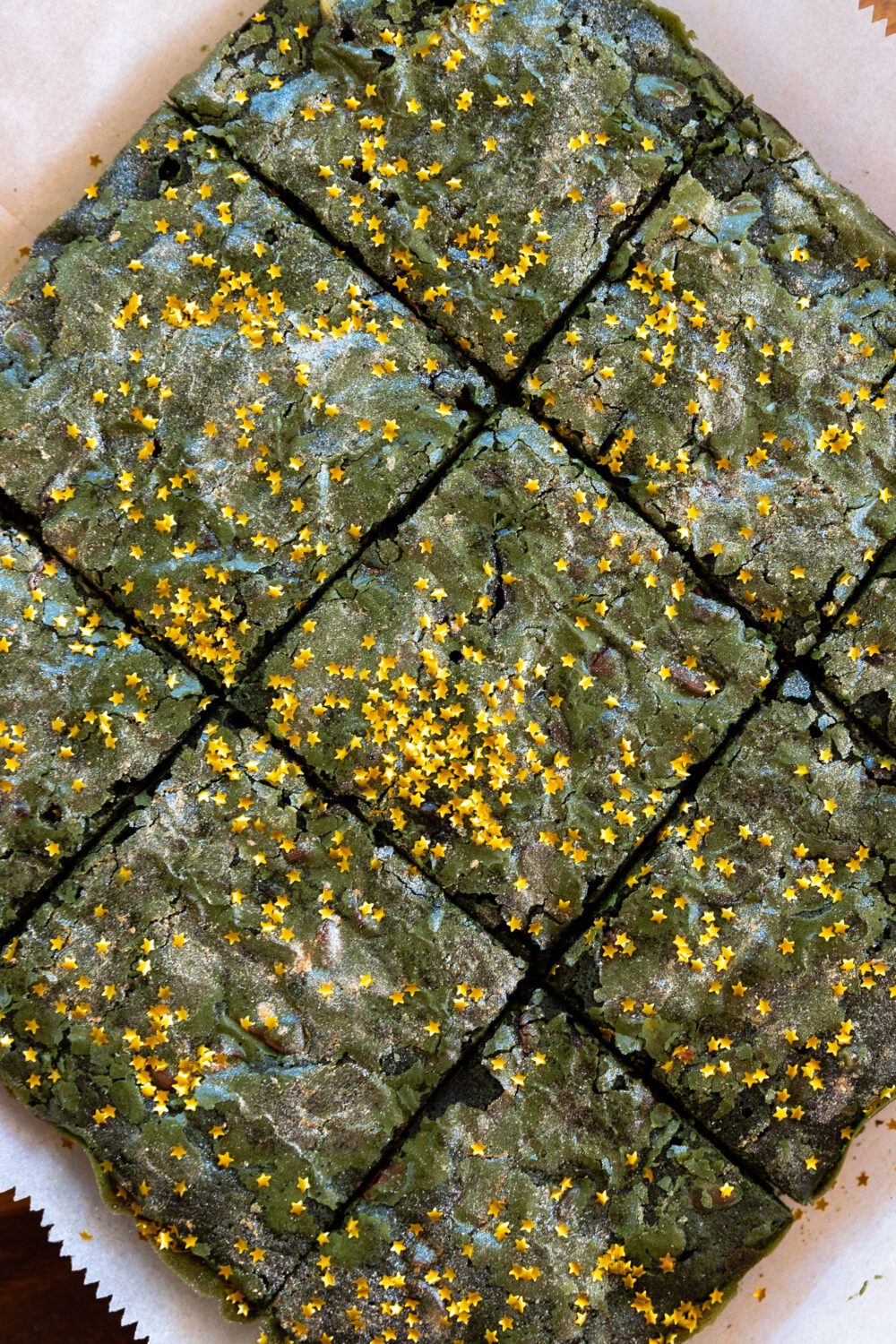 As soon as I added the gold, they looked much less like algae. Unfortunately, they looked much more like moldy brownies. I see-sawed between laughter and tears as I tried to figure out how I was going to salvage these brownies.  I sprinkled them with edible gold stars to try to mask the mold look and my youngest daughter and I both thought they looked like camouflage brownies. Not ideal, but better than mold or algae, I suppose.

I sent another photo to my cousin (this time of the inside of the brownies), and she thought they looked like I had taken a chunk of the ground and put it on a plate. I was at a loss. She said she wasn’t questioning the taste, but they didn’t look appealing. Fair.

So, I took it to Instagram stories one more time, posted a photo of the inside of the brownies, thinking that maybe seeing the melted mint and chocolate chips would distract their eyes a bit. I asked, “If you saw a photo of these St. Patrick’s Day brownies, would you make them?” 31% said yes.

So I posted a photo of the top of the brownies instead and asked, “What about from this angle?” 58% said yes. Okay, not a home run, but much better. So this is why you don’t see the inside of the brownies in any of my photos. 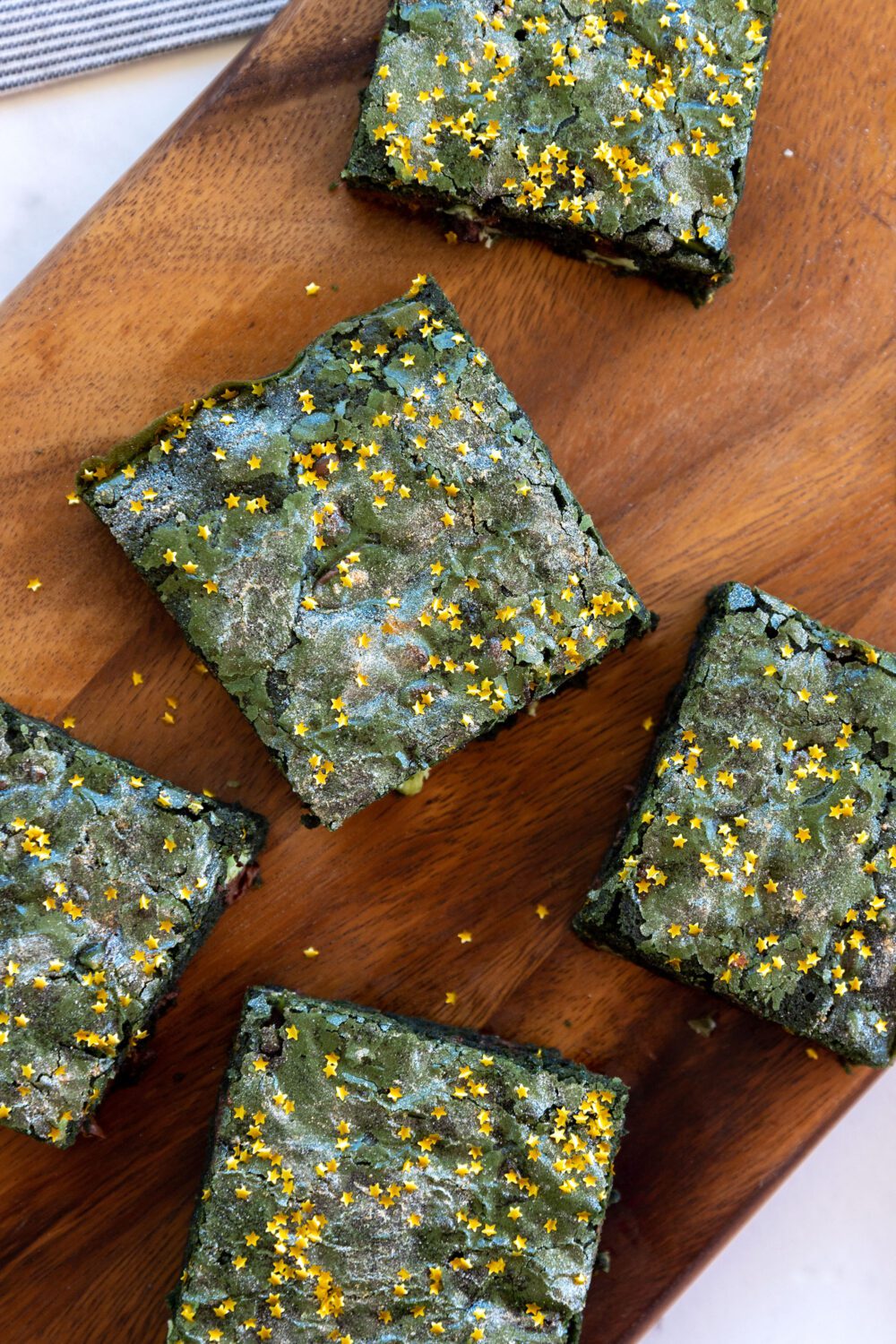 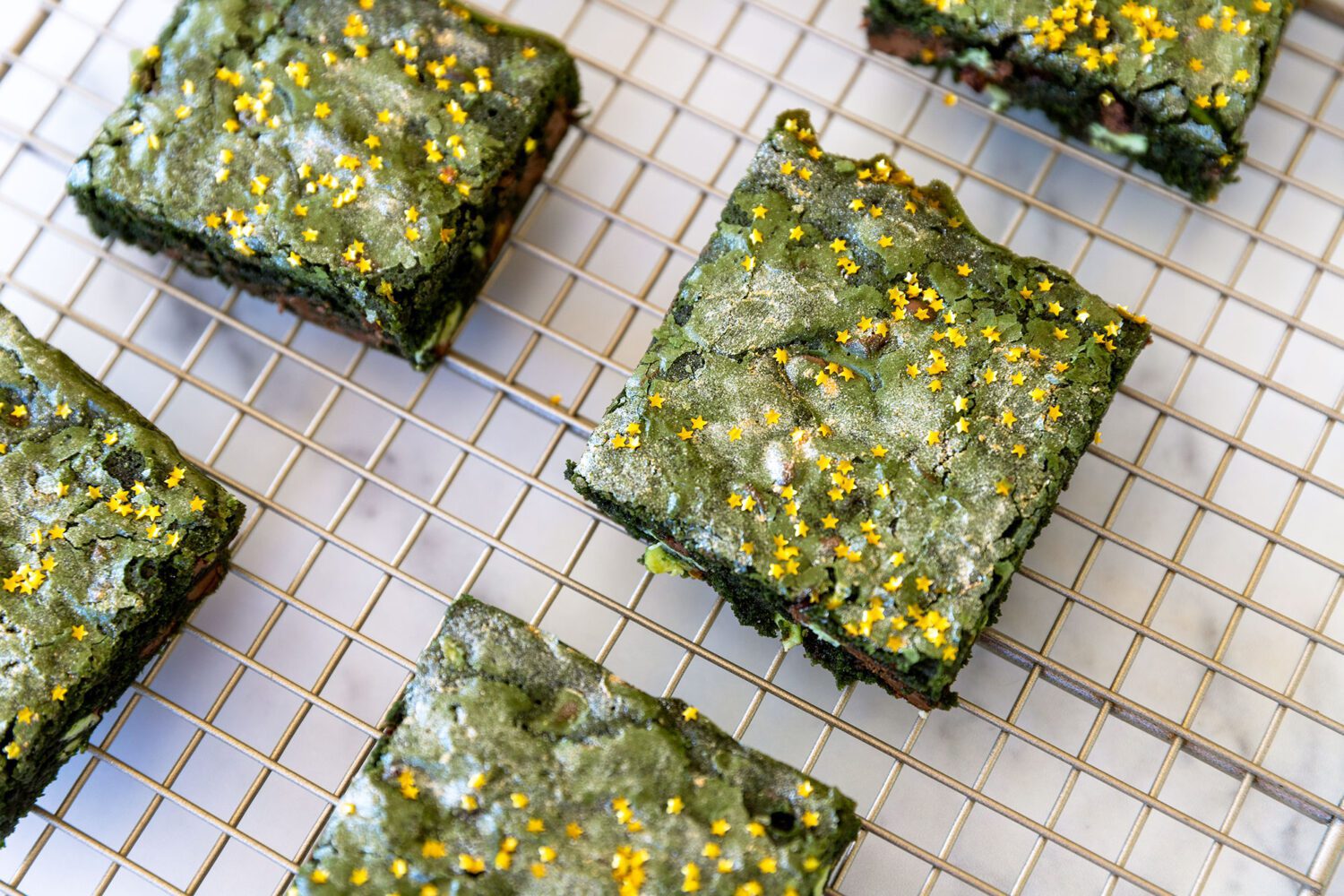 You may be wondering why I’m posting this at all. Well, as I said, they are SO DELICIOUS! I also made these mint brownies again without any food coloring. I guess I’m curious to see which recipe gets more attention. The one with the wow factor (wow factor being that looks like algae) or the one that looks like regular brownies.

Either way, I hope you’ll make this recipe for yourself (with or without the green food coloring), and let me know what you think.

You can find the mint fudge baking chips that I used at Walmart. If you are unable to find those, they sell a number of other brands. You can also use Andes mints and chop them up.

You can find gold luster dust at Joann, in the baking aisle. I also found the edible stars there as well.

If you have any questions, please make sure to comment below. I’m always happy to help! 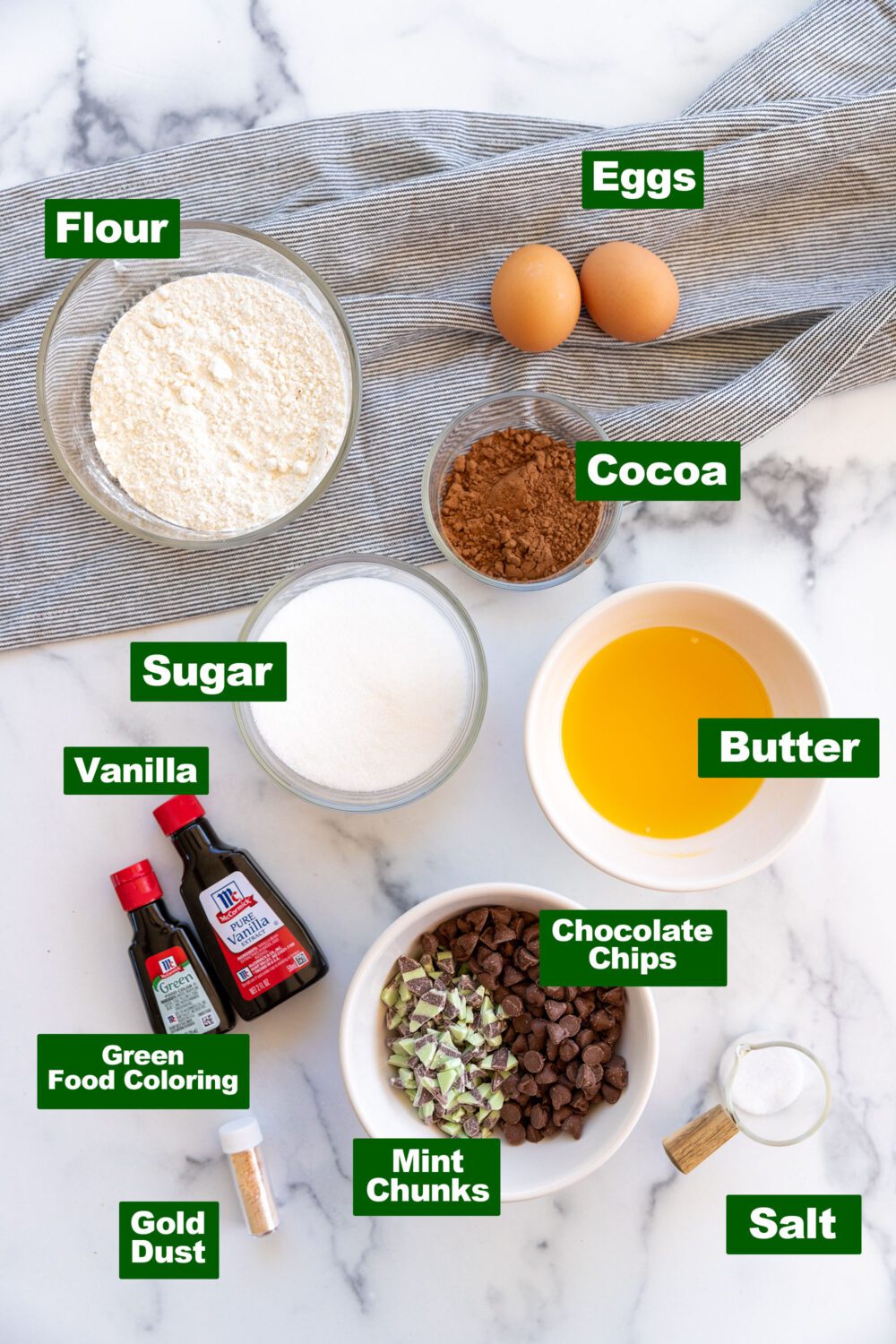 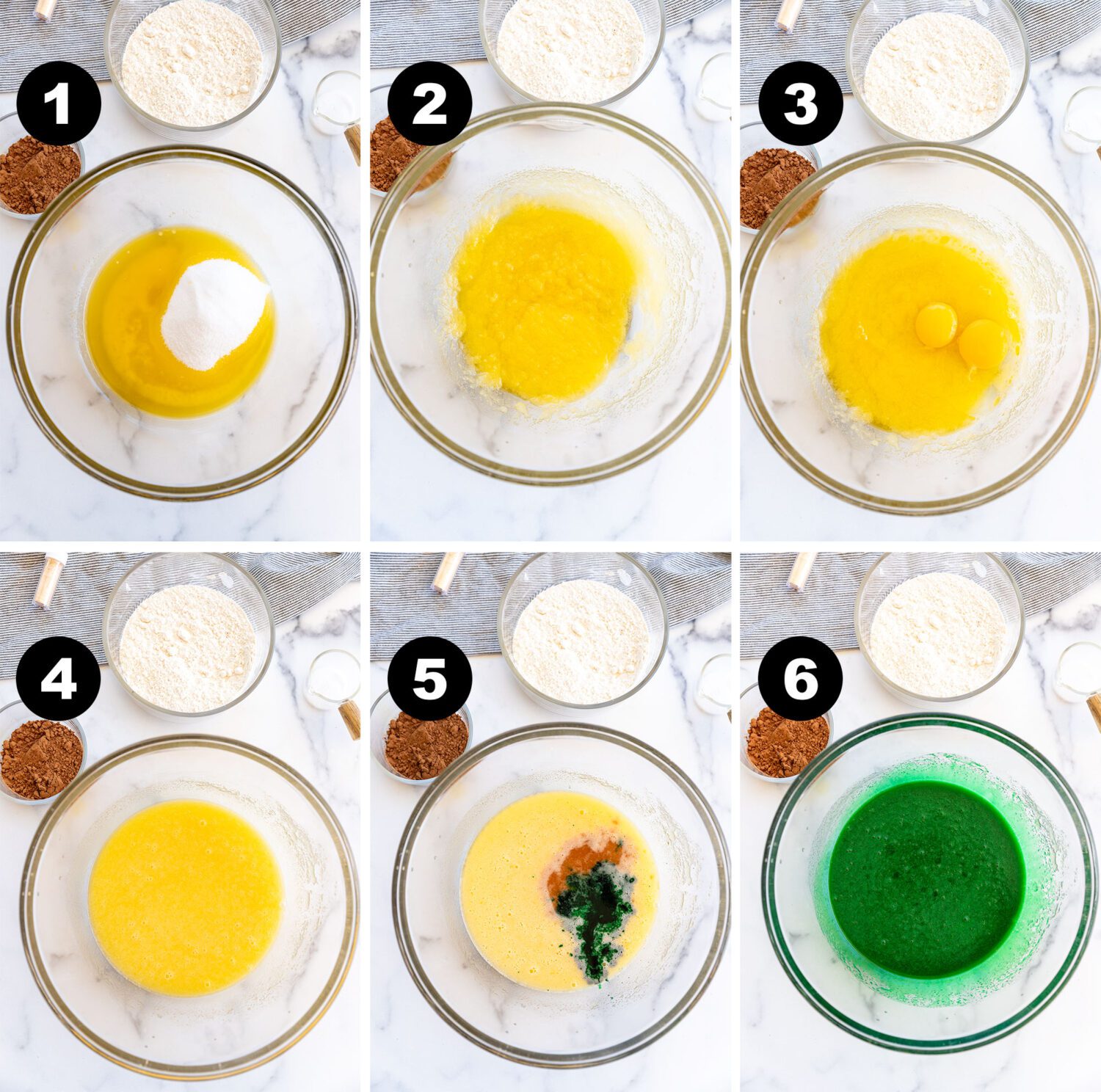 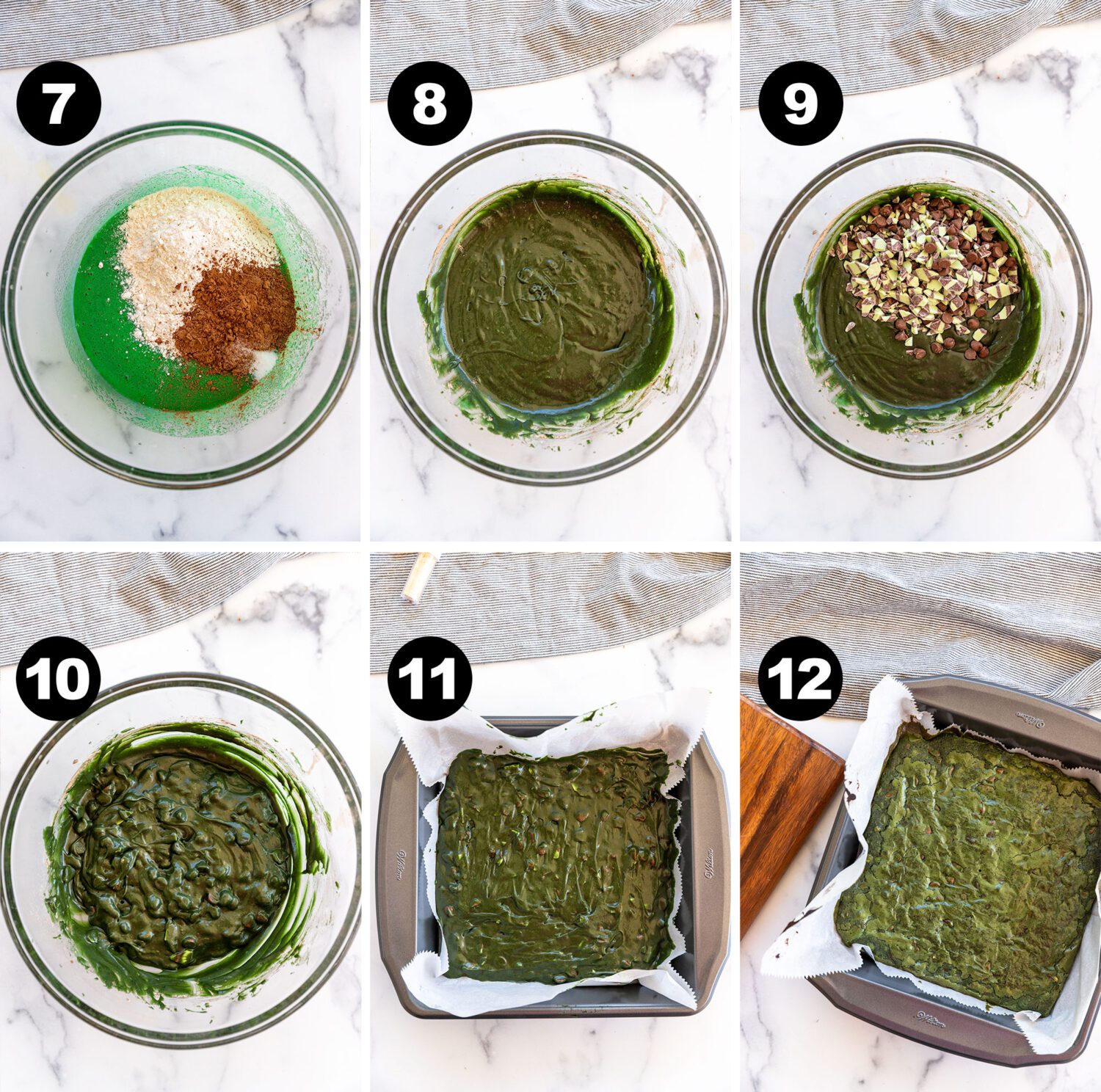 I’ve tried to show the steps in the photos above for you, to make it a bit easier to make these St. Patrick’s Day brownies.

These St. Patrick’s Day brownies are perfectly moist on the inside, and have the perfect amount of mint and melted chocolate chips.